What version of Windows 10 do I have? The quick method!

This method is fast and works the same, no matter what version of Windows 10 you have: use the Search bar next to the Start button, type winver, and press Enter, or click or tap the search result with the same name. 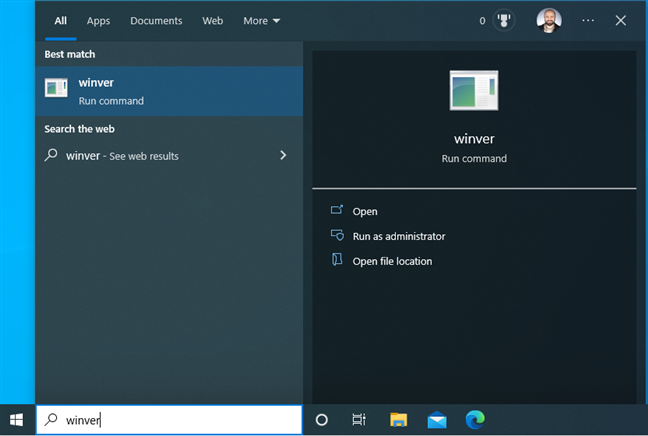 Search for winver in Windows 10

Alternatively, press the Windows + R keys to bring up the Run window, type winver, and press Enter or click or tap OK. 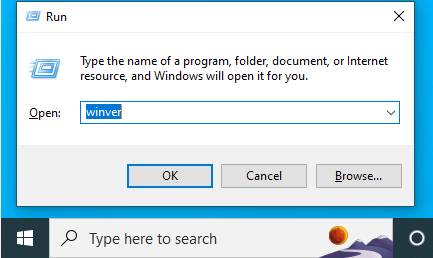 Type winver in the Run window

This command opens the About Windows box, where you see the Windows 10 version followed by the OS Build and the Windows 10 edition. For example, below, you see a PC with Windows 10 Pro and the 22H2 version, build 19045. 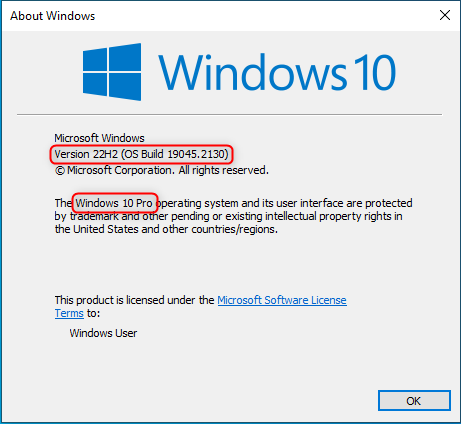 About Windows tells you the Windows 10 version, build, and edition

Is all this data confusing? Continue reading this tutorial to make sense of the version numbers you see, the OS Build, the Windows 10 edition you have, and so on.

How to check the Windows 10 version from the Settings app

This method works in all versions and editions of Windows 10, but things can look differently depending on the specific build you’re using. First, open the Settings app (the quickest way is to press Windows + I on the keyboard). Then, click or tap System. 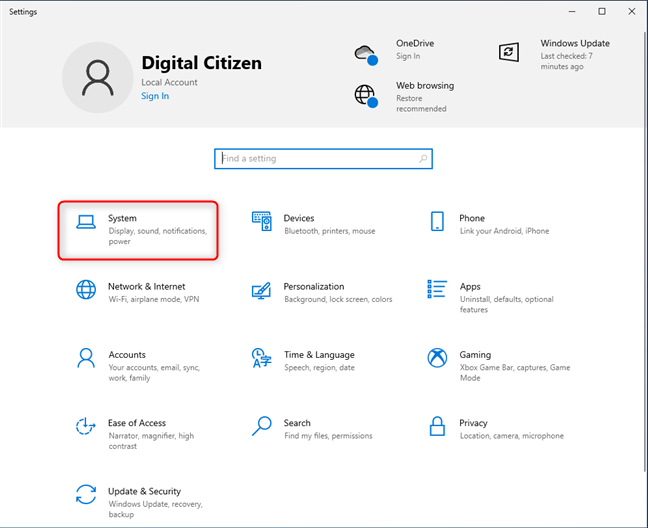 In Windows 10 Settings, go to System 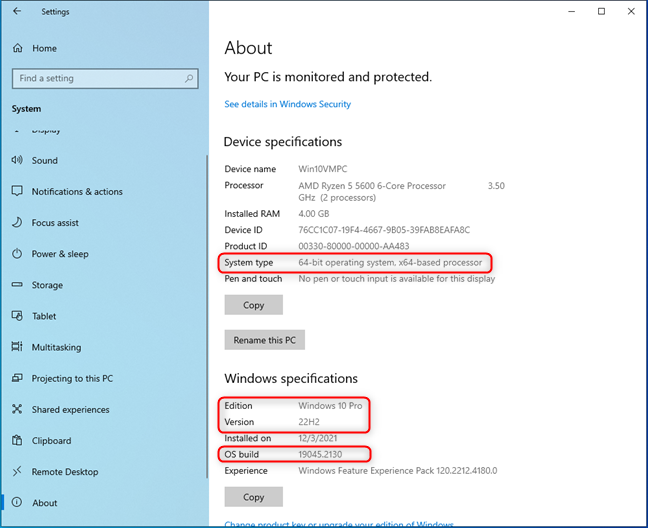 These lines of information are positioned differently, depending on your version of Windows 10. For example, here is how the About section looks in the Windows 10 November Update from 2015. The lines we mentioned exist here too but are ordered differently. 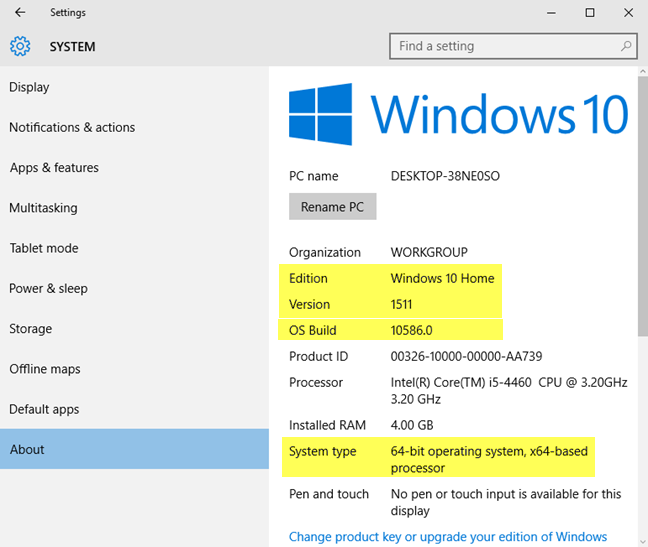 How to check the Windows 10 version from PowerShell

If you prefer using a command-line environment, open PowerShell and type or copy and paste this command:

Then, press the Enter key to execute it and see the information you’re looking for.

The Version number tells you the build of Windows 10 you have installed. In the earlier example, the build number is 19045, which comes after 10.0. With this number, you can then make sense of the exact Windows 10 version you’re using, so continue reading.

How to translate Windows 10 version numbers into feature updates

Until November 2021, Microsoft kept updating Windows 10, releasing two major feature updates each year. These feature updates have a specific version and a marketing name (like Creators Update or November 2021 Update) and come with new features, new apps, significant changes, and so on. As a result, Windows 10 has evolved a lot since it was first released in July 2015.

From November 2021 onwards, Microsoft has changed the Windows 10 release cadence to align with Windows 11, targeting annual feature updates in the second half of each year.

Getting back to your Windows 10 version, if you know the version number for your PC, here is how it translates into feature updates:

When will we get the last version of Windows 10?

According to this page on Microsoft.com, the retirement date for Windows 10 is October 14th, 2025. This means that we shouldn’t expect to get a new Windows 10 version past 2023 at the latest since that would imply the need to support this operating system past its October 2025 retirement date. However, these dates may change, and we’re keeping an eye on what Microsoft communicates about its future plans for Windows 10.

Windows 10 editions - what is different about them?

You can have one of the following editions of Windows 10 installed on your computer or device:

NOTE: If you need help deciding what Windows 10 edition to buy, read: How much is Windows 10? Where to buy Windows 10 Pro or Home?

What is the Windows 10 OS build?

The OS Build number changes with each Windows 10 update you install. To help you understand, let’s take the following situation:

The OS build number changes with each update made by Microsoft to Windows 10. This information is helpful for troubleshooting purposes. For example, when you encounter a bug and talk to a tech support engineer, the OS Build is critical to understanding the exact version of Windows 10 you’re using and what updates are necessary to fix the problem. You can learn more about the evolution of Windows 10 build numbers from this Windows 10 release information.

What is the Windows 10 system type?

This information only tells you whether Windows 10 uses the 32-bit or 64-bit register of the processor. Modern processors tend to be 64-bit, and their advantage is they can address and process much more data than 32-bit processors. So in most cases, Windows 10 should be 64-bit, which is a good thing.

Did you check what Windows 10 version you have?

Now you know how to find the Windows 10 version you have and what it means. Before closing this article, share your Windows 10 version, edition, and build number with us. We are curious to discover the most popular versions and editions with our readers.

Find out when Windows was installed. What is its original install date?

3 reasons to create more than one partition on your PC