Both Intel’s and AMD’s latest generation of desktop processors are excellent choices for gaming. They deliver incredible speeds and performance, from the mid-range area all the way up to the higher-end models. There’s no question about it: you’ll make a great choice by going with either AMD or Intel processors, at least in terms of gaming. However, I couldn’t help myself from wondering whether Intel is better than AMD or the other way around. Thus, I decided to test two similar processors from both companies and see which one’s the winner of the framerate battle. I didn’t choose the most powerful processors; I used the runner-ups from both teams: the Intel Core i9-13900K and the AMD Ryzen 9 7900X. Are you curious about which one is better in games? Then read on and find out:

Intel’s Core i9-13900K is Team Blue’s second-best Raptor Lake desktop processor. It can reach an impressively high single-core turbo frequency of 5.80 GHz. The only CPU that can outmatch it today is its big brother, the Intel Core i9-13900KS, which offers exactly the same specs except for the fact that it can reach 6.00 GHz. The Core i9-13900K offers twenty-four cores, thirty-two threads, 68 MB of cache memory (32 MB Level 2 cache and 36 MB Level 3 cache), a built-in Intel UHD Graphics 770 GPU, and compatibility with both DDR5 and DDR4 memory. The recommended price is 589 ~ 599 USD, and the real price on Amazon is around 600 USD.

AMD’s Ryzen 9 7900X is also the second in line from the company’s latest generation of processors, based on the Zen 4 architecture. Featuring twelve cores and twenty-four execution threads, this CPU can reach a maximum boost frequency of 5.6 GHz, it can rely on 12 MB of Level 2 cache and 64 MB of Level 3 cache, and it supports DDR5 memory only. The only AMD processor that’s faster is the AMD Ryzen 9 7950X, which offers a maximum turbo speed of 5.7 GHz and four cores (8 threads) more. Compared to Intel’s Core i9-13900K, the AMD Ryzen 9 7900X is sold at a more affordable price of about 420 USD.

For this battle of processors, I assembled two desktop computers using the following hardware:

As you can see, the RAM, SSD, and graphics card are the same on both configurations. Now let’s see the results in gaming benchmarks and compare the two processors.

Before we get to the results, keep in mind that I tested all the following games at the highest graphics quality available but without using ray-tracing effects or upscaling technologies such as NVIDIA DLSS or AMD FSR. Furthermore, I ran all the games in 1440p resolution as I’m confident that this is the sweet spot for gaming today. While some still play in 1080p, it’s too low for modern monitors, in my opinion. On the same note, 4K requires a graphics card that’s extremely powerful (and therefore costs an exorbitant amount of money).

I started with 3DMark’s Speed Way benchmark, which tests the computer’s performance when using DirectX 12 Ultimate on the latest graphics cards. With the Intel Core i9-13900K, I got a score of 4972 points, while with the AMD Ryzen 9 7900X, I got 4962 points. These are extremely similar scores that don’t point to any clear winner and show that both CPUs are just as powerful when it comes to the next generation of gaming graphics. 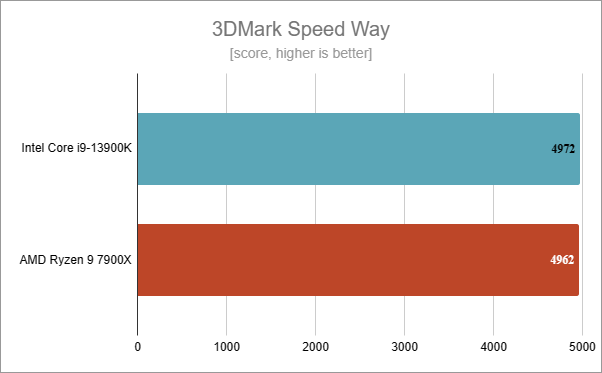 Next, I began testing real games, starting with Shadow of the Tomb Raider. In its benchmark tool, both computers delivered similar averages of frames per second. On the PC equipped with the Intel Core i9-13900K, the benchmark measured an average framerate of 204, which is practically the same as the 202 fps I got with the AMD Ryzen 9 7900X. A two frames per second difference is not meaningful and falls well within the margin of error (less than 1%). 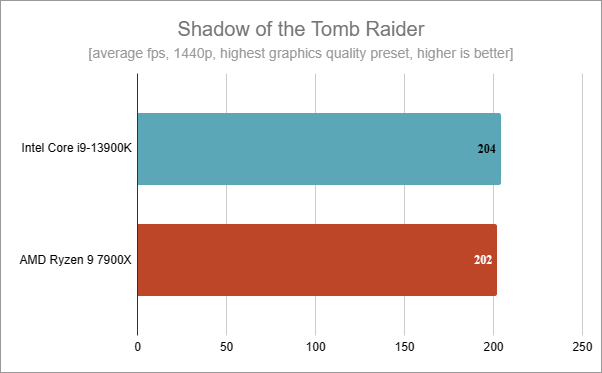 Benchmarks results in Shadow of the Tomb Raider

In Metro Exodus, there was a slightly more meaningful improvement in fps on the PC equipped with the Intel Core i9-13900K. With it, the game was able to render about 5.5% more fps than what the AMD-based computer managed. 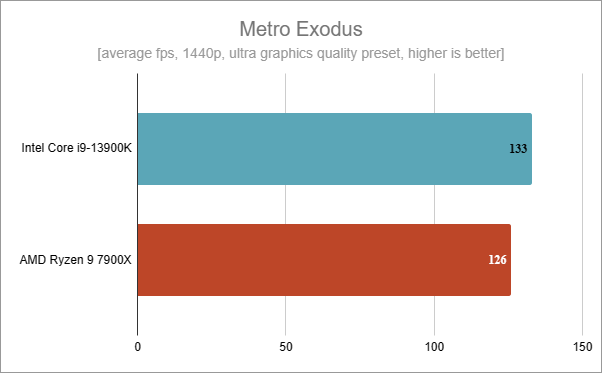 Continuing with Assassin’s Creed Valhalla, the results of the two computers were again pretty similar: 148 fps with the Intel Core i9-13900K and 146 fps with the AMD Ryzen 9 7900X.

That’s an improvement in performance of just over 1 percent for the Intel CPU compared to the AMD one. I’d say that it’s, again, a tie between the two processors, as the results are within the margin of error. 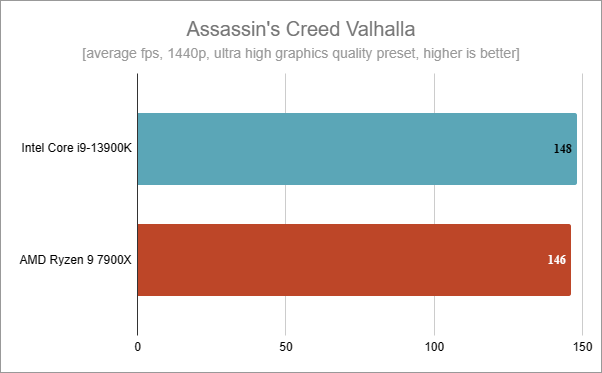 Next, Cyberpunk 2077, a game that punishes any computer, no matter how powerful it is. On the Intel-based PC, I got 121 frames per second, while on the AMD-based one, the game’s benchmark rendered 119 fps. Conclusion: the Intel Core i9-13900K led to an increase in performance of only about 1.6% compared to the AMD Ryzen 9 7900X. 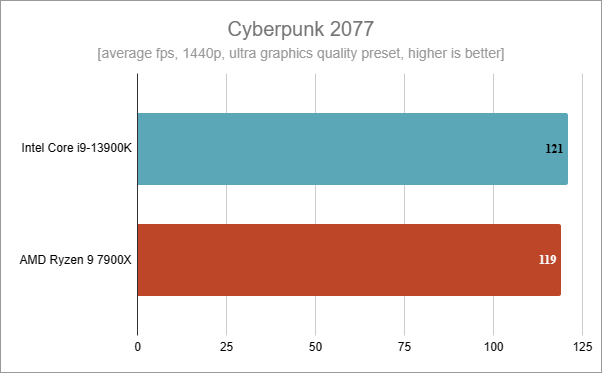 The most notable improvement in performance I’ve seen while testing these two processors was in Far Cry 6. This game is highly dependent on single-thread performance, and as my results show, the Intel Core i9-13900K is significantly better in this regard compared to the AMD Ryzen 9 7900X. With the Intel CPU, I got 172 frames per second, on average, while with the AMD processor, I only got 151. The result: using the Intel Core i9-13900K, I witnessed an fps increase of almost 14% compared to the AMD Ryzen 9 7900X. 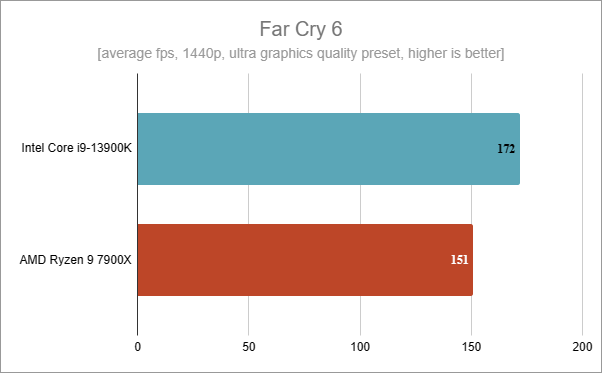 And last but not least, I tested Horizon Zero Dawn, an older but beautiful game that I still love playing to this day. Surprise: both computers, regardless of the processor, rendered exactly the same average number of frames per second. It didn’t matter if I used the Intel Core i9-13900K or the AMD Ryzen 9 7900X; the framerate was 177 in both scenarios. 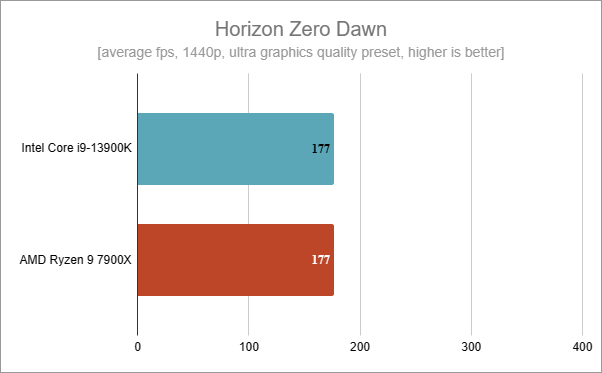 The majority of gaming benchmark results I got show the same thing: the Intel Core i9-13900K processor delivers roughly the same level of performance as the AMD Ryzen 9 7900X. The Core i9-13900K seems to benefit a tiny bit from its slightly higher maximum turbo frequency (5.8 GHz vs. 5.6 GHz for the AMD Ryzen 9 7900X), but the end result is maybe a few frames per second more. Practically, all my results except for the ones in Far Cry 6 were almost identical.

To conclude, you could go either way and choose any of these two processors, and you’ll get the same levels of performance in gaming. But, to be fair, consider the fact that the Intel Core i9-13900K has a price of about 600 USD, while the AMD Ryzen 9 7900X is more affordable at just 420 USD. Also, take into account that the previous benchmarks were run on two computers that were both using DDR5 memory. In this case, the motherboards and RAM have similar prices no matter what processor you choose, so the overall price is higher for a PC based on the Intel Core i9-13900K CPU.

However, if you choose to get an Intel Core i9-13900K, you could keep using your old DDR4 memory and buy a DDR4- compatible motherboard. In this case, the overall costs of a PC based on an Intel Core i9-13900K with DDR4 could be similar to that of a computer running on an AMD Ryzen 9 7900X with DDR5. And the gaming performance would still be similar, as this analysis shows: DDR4 vs. DDR5: Should you upgrade?.

Will you go with Intel or AMD for your next gaming CPU?

That’s what I’ve learned from my tests. Before you close this tab, I’m curious to know what you’ll choose for your next CPU: Intel or AMD? Did my results affect your decision? Also, if you’ve done a similar experiment, don’t hesitate to let me know in a comment below and share your results. Can’t wait to read your stories.