DDR4 has been available for a long time and thus has reached its maximum potential. It’s a mature memory specification that ensures both stability and performance. In comparison, DDR5 was only launched in 2021, and while not in its early days, it is still a work in progress. Though DDR5’s innate performance improvements over DDR4 should be obvious, DDR4 still has a word to say, and things aren’t as clear as you might think. What should you choose? Who’s the winner of the DDR5 vs. DDR4 battle in 2023? More on the subject in the words below, including key differences between DDR4 and DDR5, as well as benchmarks:

NOTE: If you prefer to watch a video going through all the technical details from this article, click Play on the video below. Otherwise, scroll down and enjoy reading the analysis we've made. 🙂

Launched in 2014, DDR4’s main improvements over its predecessor, DDR3, were a higher module density, lower voltage requirements, and faster data rate transfer speeds. It works at a voltage of 1.2 V and runs at a frequency (bus clock) between 800 and 2550 MHz. Data transfer rates are calculated by multiplying the clock by two, ranging between 1600 and 5100 MT/s (Mega Transfers per second). These are the numbers advertised on RAM modules using the standard naming convention (e.g., DDR4-3200, DDR5-6000), regardless of whether you’re looking at DDR4 or DDR5.

DDR5 is the successor of DDR4, and this new type of random-access memory uses even higher-density modules. The voltage decreases to 1.1 V, while the frequency (bus clock) starts at 1600 MHz and goes upwards to 4200 MHz. That means that DDR5 can deliver data transfer speeds stretching from 3200 to 8400 MT/s! Furthermore, because it uses a lower voltage, DDR5 is more power efficient than DDR4 and should also run at lower temperatures. 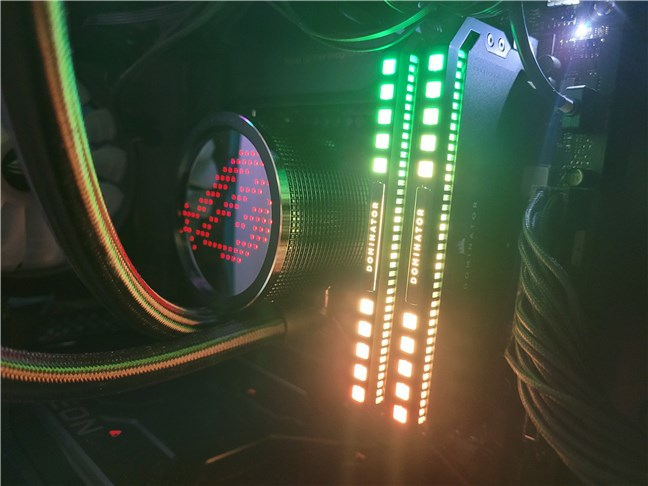 The maximum limit DDR4 allows on an individual module (stick) is 16 GB, while DDR5 can accommodate up to 64 GB. However, current consumer motherboards and processors can only work with up to 128 GB of RAM in total, usually via four DIMM slots. In other words, both DDR4 and DDR5 modules sold these days have a capacity of up to 32 GB.

Regarding the number of pins on each module, both DDR4 and DDR5 use the same 288-pin layout, but the notch is placed differently. This is a choice made by manufacturers only to help us identify the type of memory modules we have and not be able to insert a DDR4 module in a DDR5 slot or the other way around.

Getting back to the main advantage of DDR5 over DDR4, the speed boost, we already know that DDR5 is capable of offering significantly higher speeds. I believe it’s safe to say that the most common DDR4 memory kits in 2023 are and will continue to be DDR4-3000 and DDR4-3200. For DDR5, the most popular are and will likely continue to be DDR5-5200 and DDR5-6000. Just by looking at their data transfer specs, we can see that the DDR5 modules offer roughly twice the speed of DDR4. 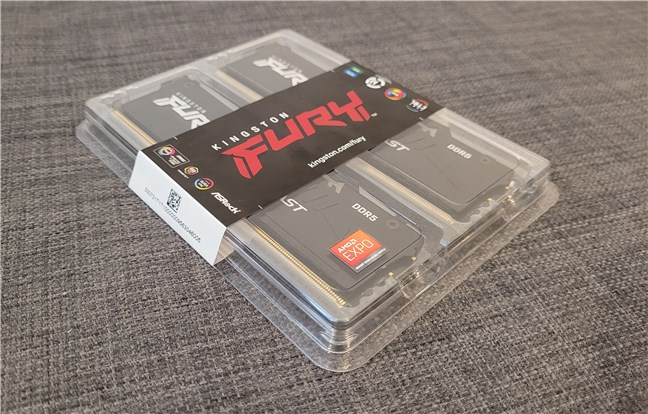 The advance of computer processors during the last few years and the increasing number of cores means that modern CPUs benefit greatly from higher memory bandwidth. Which is exactly what DDR5 offers compared to DDR4. So, it should be evident that you’ll want DDR5 if you get yourself a new performance or high-end Intel Core or AMD Ryzen processor that supports DDR5. The ones that do work with DDR5 are either Intel Core CPUs from the 12th or 13th generations (Alder Lake or Raptor Lake) or AMD Ryzen processors from the 7000 series (Zen 4).

However, in reality, things are not as clear as you might think. Some people say that there’s an elephant in the room: the higher latency of DDR5 memory. It’s true that DDR4 comes with lower latencies compared to DDR5. But that doesn’t mean that DDR4 is necessarily faster than DDR5. The main value in terms of RAM latency is the one called CAS latency (Column Address Signal). This value tells us how much time it takes for a RAM module to access a certain set of data that the processor needs from the module. The CAS latency value is specified in clock cycles; for example, if you have a RAM kit with a CAS latency of 16, that means that the RAM needs 16 clock cycles to access any data required by the processor.

Obviously, a lower latency means faster RAM and overall better performance. Most DDR5 memory kits have a CL (CAS latency) of 40, which is a lot more than what DDR4 offers. Thus, although DDR5 is much faster than DDR4 at doing its work, it needs more time to “understand” what its job is. This is a key aspect that manufacturers should address over time and either decrease the latency somehow or increase the data transfer speeds (frequency) so much that it annuls the time lost because of the higher latencies.

So, even if DDR5 comes with many improvements over DDR4, the performance you really get depends a lot on the type of workload you use your computer for. In some situations, and in certain applications, you will see a significant speed boost when using DDR5. In others, the performance boost might be too small or even inexistent. That’s why I decided to run a couple of benchmarks to see if and when it’s worth upgrading from DDR4 to DDR5.

For the next benchmarks, I used four memory kits (two DDR4 and two DDR5):

The other hardware and software components of the test PC were these:

I started with Cinebench R23, a rendering benchmark. The results I got for the two DDR4 kits and for the DDR5-6000 are roughly the same and within the margin of error. Only the high-end DDR5-7200 memory showed a small improvement compared to the others. In this benchmark, upgrading from DDR4 to DDR5 only led to an increase in performance of about 1 to 5%. 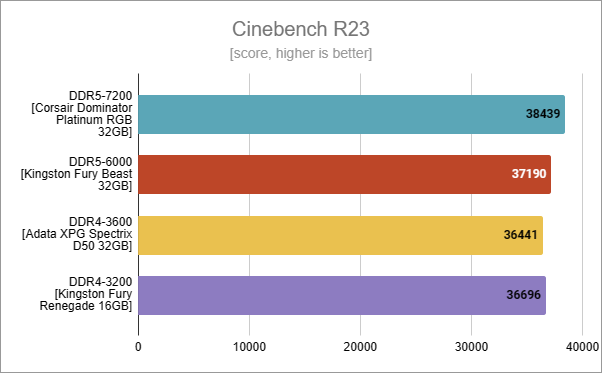 In Blender, another rendering benchmark, the results were relatively similar, though the score differences were a bit more notable. The differences between the two DDR4 kits were insignificant, just as they were between the two DDR5 memory kits. However, going from DDR4-3200 to DDR5-6000 led to an increase in performance of about 6.5%, while going from DDR4-3600 to DDR5-7200 meant a percentage increase of roughly 8.5%. 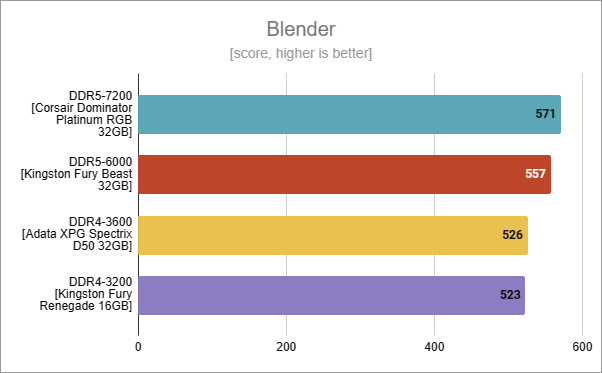 The most remarkable performance boost recorded in all the benchmarks I’ve run was in 7-Zip during its Compression test. Here, each increase in RAM frequency translated into considerably higher compression speed. Upgrading from DDR4-3200 to DDR5-6000 meant a speed increase of 61% while switching from DDR4-3600 to DDR5-7200 offered a speed boost of almost 66%! 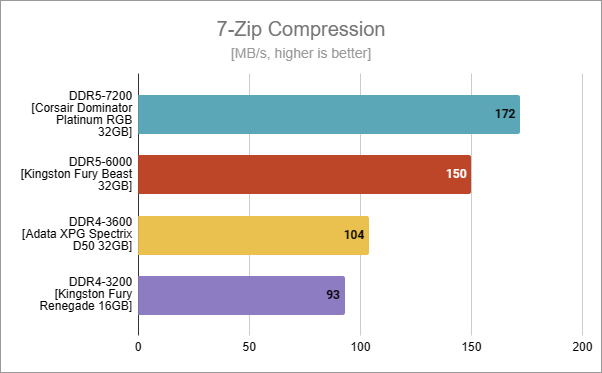 On the other hand, the decompression speeds measured by 7-Zip were virtually the same regardless of what RAM I used. The speed differences were negligible, and it didn’t matter if I had DDR4 or DDR5. 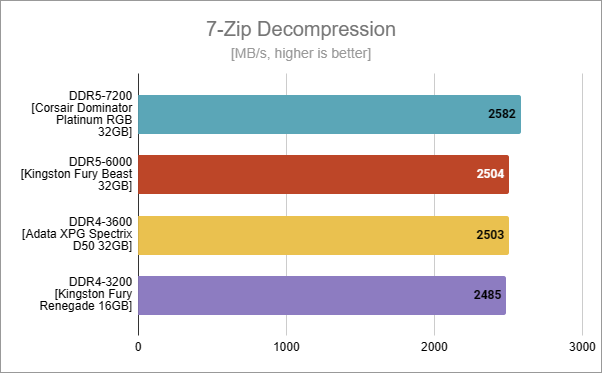 Next, I checked the overall computer performance with PCMark 10, a benchmark that tests different kinds of typical workloads. These include web browsing, editing documents, video conferencing, and digital content creation. The type of RAM I used (DDR5 or DDR4) was of no meaningful consequence in terms of performance. 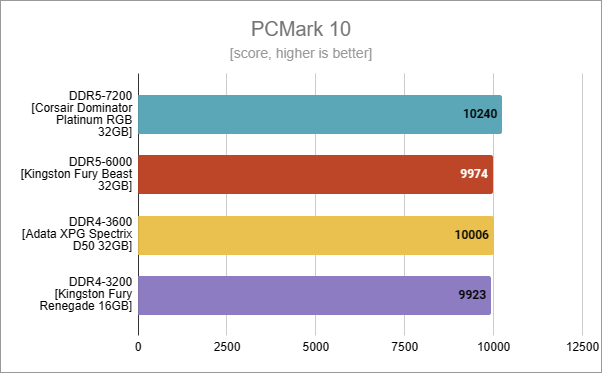 3DMark’s Speed Way benchmark, which measures the performance in gaming with DirectX 12 Ultimate, showed that even in the latest and most demanding games, it doesn’t really matter if you’re using DDR4 or DDR5. The scores were practically the same and within the margin of error. 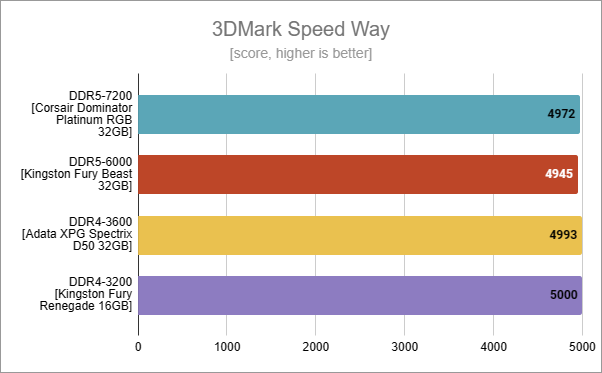 Next, I went on to test a few games that have considerable system requirements to run at high graphics quality. I chose to run them in 1440p resolution as this is, I believe, the sweet spot for gaming these days. 1080p is not enough for current monitors, and 4K is still somewhat prohibitive in terms of costs involved with buying capable graphics cards. Will DDR5 improve your fps?

The first game I tested was Shadow of the Tomb Raider, and its benchmark tool revealed no differences between using DDR4 and DDR5 memory kits. The number of fps was basically identical in all cases. Here, only an even more powerful graphics card would make a difference. 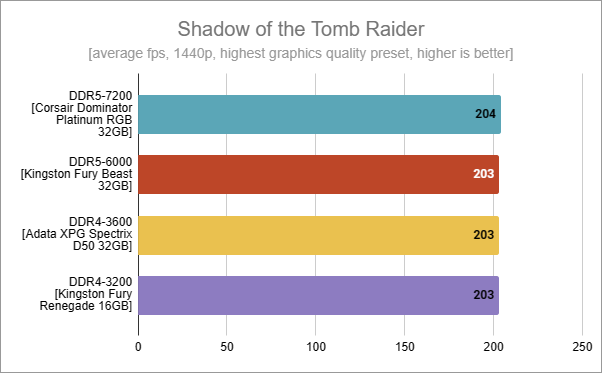 Shadow of the Tomb Raider: DDR5 vs. DDR4 benchmark results

The second game I tested was Metro Exodus. Just like in the previous one, choosing to use any of the four DDR memory kits didn’t really make a difference. I got similar results with both DDR4 and DDR5 memory modules. The differences in the average number of frames per second were insignificant and within the margin of error. 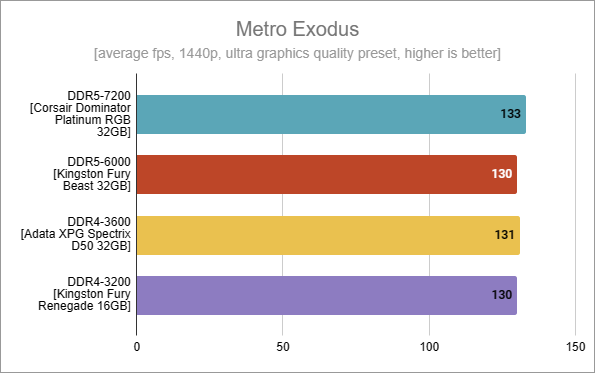 In Assassin’s Creed Valhalla, the average number of frames per second was exactly the same regardless of the type of RAM I used. With either DDR4 or DDR5 memory kit, I got 148 fps. The limitation here comes from the GPU, which is AMD’s second most powerful today (after the Radeon RX 7900 XTX). So, unless you have an Nvidia GeForce RTX 4090, you’ll probably have no benefit from using DDR5 instead of DDR4 in this game. 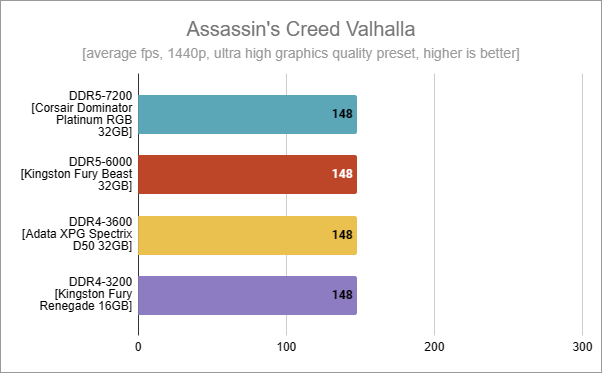 Last but not least, I witnessed the same thing in Cyberpunk 2077, where the average number of frames per second recorded with either DDR5 or DDR4 was identical. No, if you play this game in 1440p on ultra graphics settings, it doesn’t matter if you have DDR5 or DDR4.

So, in the end, is it worth it upgrading from DDR4 to DDR5? The answer depends on a few factors you should take into consideration.

Here’s what you should know about DDR5 and DDR4 when it comes to AMD processors:

If you’re an Intel fan or are already invested in the Intel ecosystem of processors/motherboards, consider this fact:

DDR5 vs. DDR4: Costs and decisions

Now, what about performance gains from using DDR5 instead of DDR4? After walking through the key aspects of DDR5 and DDR4 in terms of design and specs and after checking the benchmarks results, we can draw a couple of conclusions:

Finally, considering that DDR5 memory kits are still sold at high (often prohibitive) prices, I’d say that in the short term, it’s not worth upgrading from DDR4 unless:

Will you choose DDR5 or DDR4?

That’s it for this analysis. As you’ve seen, there are meaningful reasons to get DDR5, just as there are reasons to stick with DDR4 memory modules. Which one will you choose, and what’s your reason for making this decision? Let me know what you think in the comments section below.

How to test your RAM with the Windows Memory Diagnostic tool