The AMD Radeon RX 7900 XT graphics card is one of the best choices if you want:

There are many positives about the AMD Radeon RX 7900 XT:

On the negative side of things, the AMD Radeon RX 7900 XT: The AMD Radeon RX 7900 XT is a great example of what a generational change should look like. AMD’s RDNA 3 architecture moves on from a traditional graphics chipset design to a new chiplet design and manages to improve performance significantly. After testing and benchmarking the AMD Radeon RX 7900 XT in several games, I can conclude with enough certainty that this is one of the best graphics cards you can get today. The framerates it manages are excellent in both 1080p and 1440p resolutions and on the highest graphics settings available. If you’re a gamer and want a first-class GPU that can handle anything you throw at it but aren’t willing to pay the higher prices that NVIDIA asks for its similar cards, you should take a look at the AMD Radeon RX 7900 XT. After all, the closest competitor from NVIDIA, the GeForce RTX 4080, is about 300 USD more. Cost is key here, and the AMD Radeon RX 7900 XT is a prime choice for any enthusiastic gamer right now, at least in my opinion.

The AMD Radeon RX 7900 XT graphics card arrives in a relatively large box made of premium cardboard, with a very attractive design. It’s all black and dark gray, and the stylized image of the GPU on the top cover is enticing. 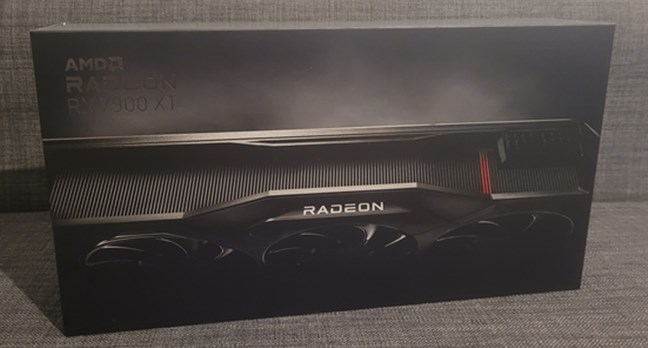 There are no technical specs printed on the package, except for a few details on the back about the AMD Adrenalin Software. Opening the box reveals the same minimalistic approach but also AMD’s care for details. The Radeon RX 7900 XT looks amazing at first glance. 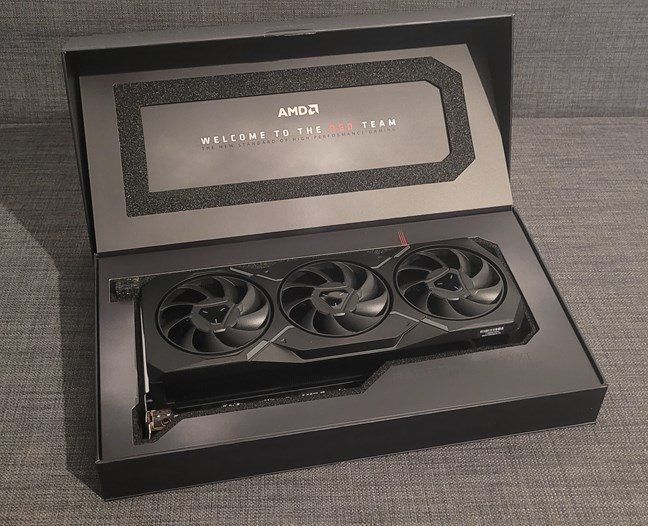 The contents of the box are also kept simple: you get the graphics card, a user manual, and a note welcoming you to the Red Team. 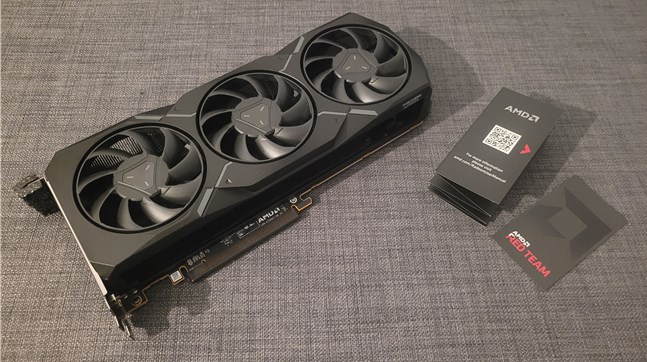 The package of the AMD Radeon RX 7900 XT video card is minimalist, but everything looks awesome, outside and inside.

The Radeon RX 7900 XT is based on AMD’s latest Navi 31 GPU that uses RDNA 3.0 architecture and is built on a 5-nanometer production process. This graphics processing unit has a die size of about 300 mm² and a transistor count of 57,7 billion. No matter how you look at it, this is a very large chip. Furthermore, the RDNA 3 architecture is a first in the world of graphics, as it’s the only one until now using chiplet technology. What does that mean? Well, the GPU doesn’t have only one die where everything’s packed together, but rather multiple dies: a GCD (Graphics Compute Die) and up to six MCDs (Memory Cache Dies). The first one is built on a 5nm process, it holds the core GPU engine and is in charge of all the calculations required by the graphics card. The additional dies, MCDs, are built on a 6nm manufacturing process and are responsible for the GDDR6 RAM interface and AMD’s second-generation Infinity Cache. 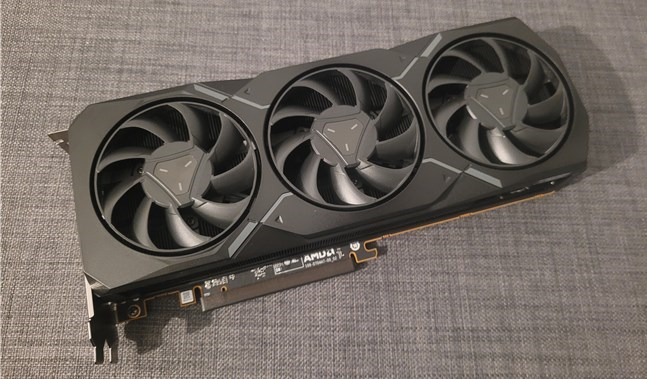 Speaking of which, the 2nd generation AMD Infinity Cache allows the graphics card to get fast data access and massively increase bandwidth. Thanks to its 80 MB of Infinity Cache and a 320-bit memory bus with 20 GB of GDDR6 RAM, the AMD Radeon RX 7900 XT can offer a huge bandwidth of no more, no less than 2912 GB/s. 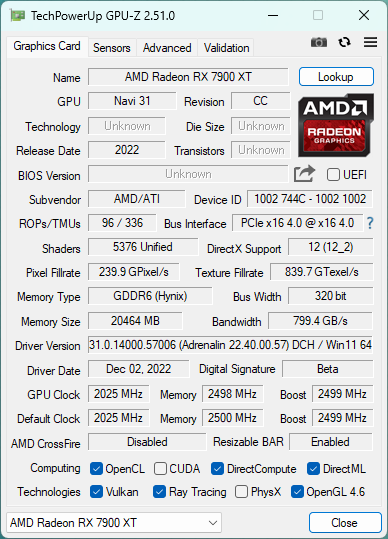 Now that we know a bit more about the insides of this GPU, what about the physical aspects of the AMD Radeon RX 7900 XT? Measuring 276 millimeters (10.87 inches) in length, the card is relatively long but not so long that it can’t fit in any standard desktop computer case. And, as already shown in this review’s previous pictures, it accommodates three fans. In terms of vertical dimensions, the graphics card occupies 2.5 slots. 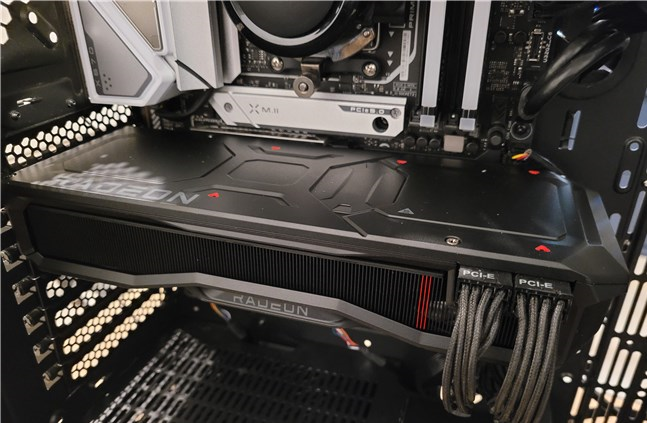 A thing I like about AMD’s design choices for this graphics card is the fact that it’s all black, from fans to the body and to the backplate on top of the card. While I do tend to approve of RGB lights, in this case, the GPU looks better without them. 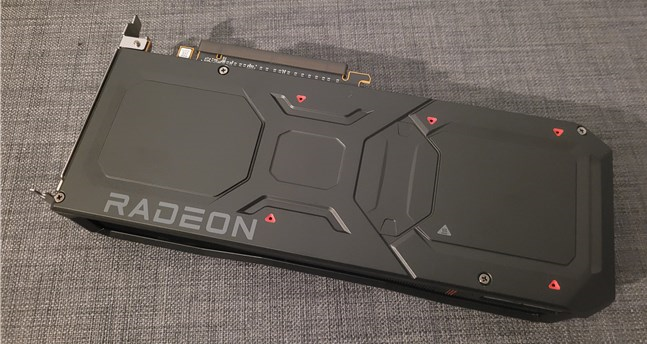 The metal backplate of the AMD Radeon RX 7900 XT

The AMD Radeon RX 7900 XT comes with two DisplayPort(s) (2.1), an HDMI (2.1), and a USB Type-C port. Depending on the resolution and refresh rate of your displays, you can connect to up to four displays simultaneously. What’s noteworthy here is the inclusion of DisplayPort version 2.1, which is available only on Radeon RX 7000 series graphics cards. NVIDIA, for instance, is still using DisplayPort 1.4 even on its highest-end RTX GeForce 4090! Compared to the old DisplayPort 1.4, the 2.1 revision allows for a maximum refresh rate of up to 900 Hz in 1440p resolution, 480 Hz in 4K, and 165 Hz in 8K!

Another positive aspect of the AMD Radeon RX 7900 XT is that it draws its additional power via two standard 8-pin PCIe connectors, unlike NVIDIA’s RTX 4000 series cards, which need a 16-pin connector. Moreover, the power consumption of the AMD Radeon RX 7900 XT graphics card is not over the top either. AMD says that the TBP (Total Board Power) for this card is 315 Watts and recommends a power supply of 750 Watts.

While I’ve only just scratched the surface in terms of features and specs of this graphics card, you can delve deeper into its ins and outs on the official webpage: AMD Radeon RX 7900 XT Tech Specs.

To get a clear idea of how powerful the AMD Radeon RX 7900 XT graphics card is, I put it to the test in a couple of games. To benchmark it, I used a desktop computer with the following hardware and software components:

Also, note that I benchmarked all the next games using the highest possible graphics settings but without enabling ray tracing or AMD FSR.

I started with CyberPunk 2077, a game that looks amazing but demands a lot of performance from the computer you run it on, especially in terms of graphics capabilities. The PC I assembled with the AMD Radeon RX 7900 XT managed to offer very high framerates in both 1080p and 1440p resolutions. Using the Ultra graphics preset, I got 174 fps in 1080p and 120 fps in 1440p. 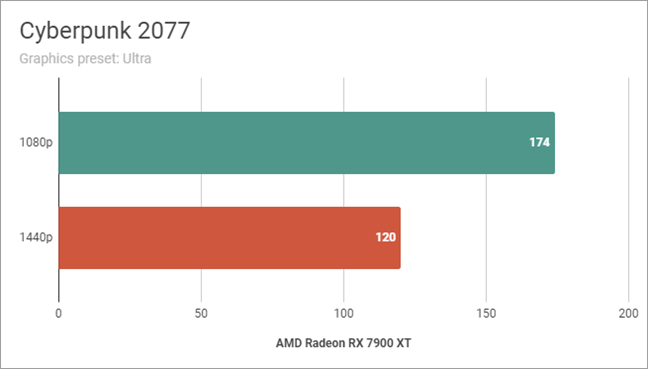 The second game I tested with the AMD Radeon RX 7900 XT graphics card was Shadow of the Tomb Raider. Although a couple of years old, it’s still a beautiful game that requires a powerful gaming machine if you want to play it at maxed graphics quality. As you can see in the next chart, the average framerates I measured were very high. On the Highest quality preset, I got 251 fps in 1080p and 202 fps in 1440p. 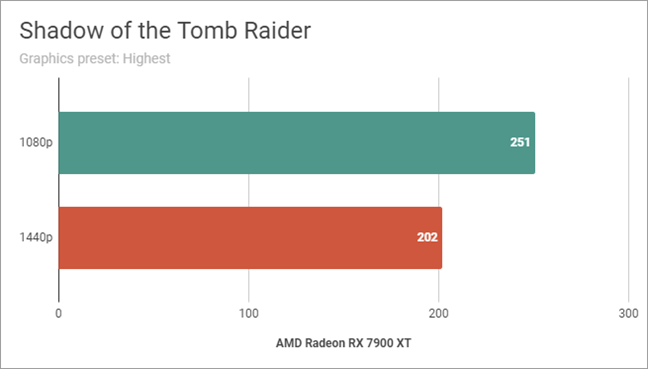 Metro Exodus is yet another game that needs powerful hardware if you want to enjoy its best graphics quality. The AMD Radeon RX 7900 XT graphics card handled it quite effortlessly, managing to render 160 frames per second on average in 1080p, and 130 fps in 1440p resolution. 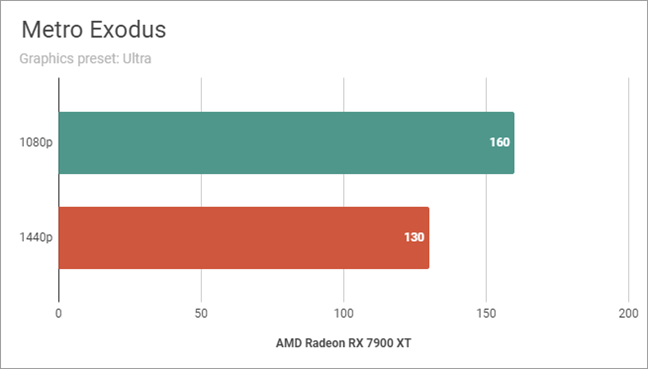 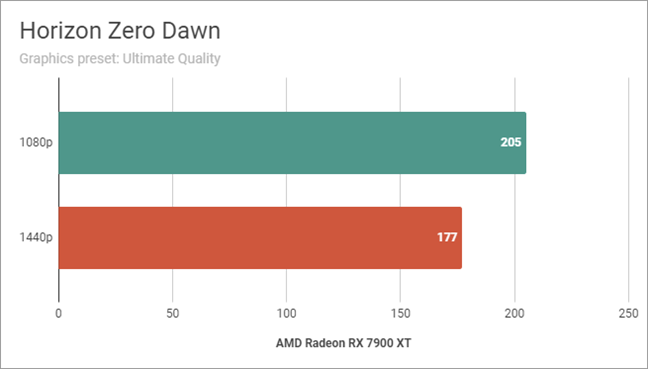 The last game I benchmarked was Ubisoft’s Assassin’s Creed Valhalla, one of the most demanding games to date. Setting it to the Ultra High graphics quality preset, I got 183 fps in 1080p and 147 frames per second in 1440p. 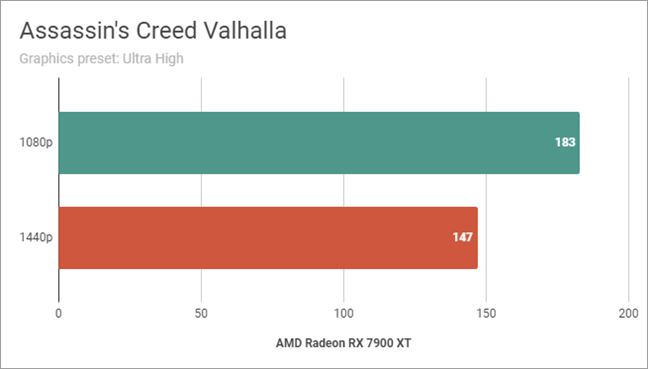 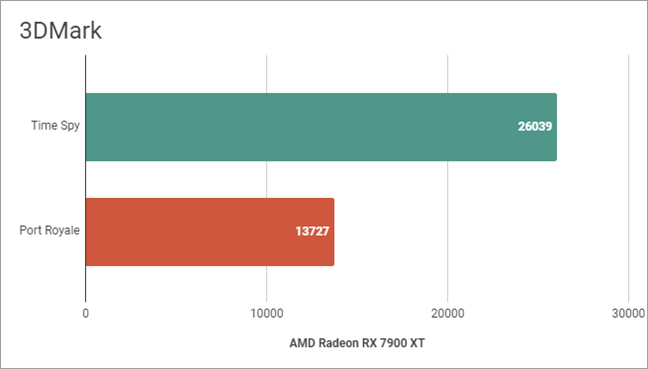 While running the benchmarks, I also kept an eye on the amount of power drawn by the AMD Radeon RX 7900 XT video card, as well as its temperatures. Furthermore, I also checked the maximum values reached while running FurMark, and what I found was that this graphics card manages to stay cool, under 80 degrees Celsius, but can draw up to 310 Watts. A 750 Watts power supply is clearly required if you also have other powerful components such as a new AMD Ryzen 7000 or Intel Raptor Lake processor. 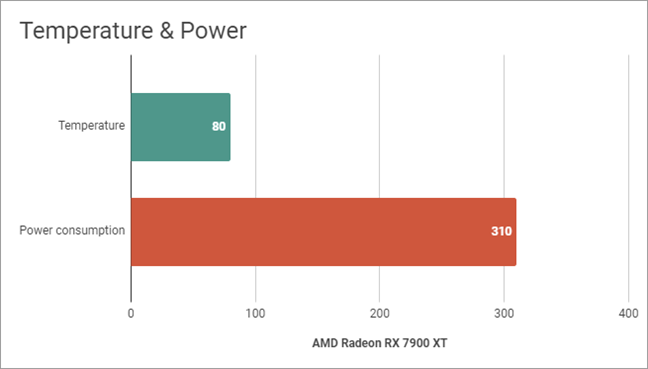 The AMD Radeon RX 7900 XT is one of the best high-end graphics cards you can get. Second in line only to the AMD Radeon RX 7900 XTX, this card manages to deliver excellent performance in any game and at any resolution. Taking into account its price and features, I’d say it’s a great deal for anyone looking to play games at maximum graphics quality and high framerates.

What’s your opinion about the AMD Radeon RX 7900 XT?

Now you know what the AMD Radeon RX 7900 XT graphics card can do and what novelties it brings to the world of gaming. What’s your opinion about it? Do you think it’s a better choice in terms of price per performance than what the competition (NVIDIA) has to offer right now? Let me know in the comments section below.

How to disable the Radeon Software overlay (ALT+R)