The main positive aspects of the AMD Ryzen 9 7900X processor are the following:

After testing and running benchmarks on the AMD Ryzen 9 7900X, I’ve come to the conclusion that this is an amazing desktop processor, especially for those in a creative business who need a powerful computer able to create digital content as fast as possible. Things like video rendering, working with CAD apps, or image-editing software such as Photoshop will run great on it. Sure, there’s also the Ryzen 9 7950X, which is even more powerful, but it’s also pricier. Therefore, if you need an awesome processor for professional workloads but don’t want to splurge on the most expensive choice, AMD Ryzen 9 7900X is a sensational CPU that I wholeheartedly recommend. You won’t be disappointed!

The AMD Ryzen 9 7900X comes inside a large box. I’ve seen the same kind of packaging on the AMD Ryzen 9 7950X, so this is something AMD chose for its high-end desktop CPUs. The box is made of high-quality cardboard with a gray background and orange accents, and it looks beautiful. You can also see the Ryzen 9 7900X processor through a cutout. 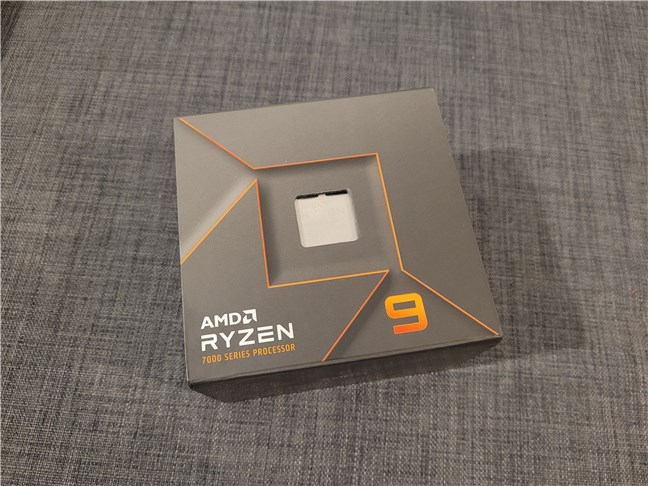 Inside the package, you’ll find the AMD Ryzen 9 7900X processor, a small sticker, and the installation/warranty instructions. Everything’s placed on a large protective foam, and the processor is further secured in another small transparent blister. 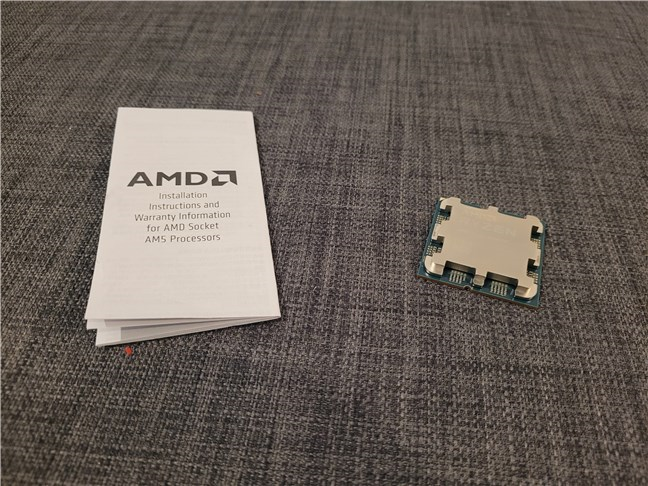 The unboxing experience of the AMD Ryzen 9 7900X is satisfying. Although there’s not much you can bundle with a CPU, the packaging looks great.

One of the most intriguing processors from AMD’s new lineup of desktop CPUs is the AMD Ryzen 9 7900X. As you may already know, the Zen 4 series includes four models: Ryzen 9 7950X, Ryzen 9 7900X, Ryzen 7 7700X, and Ryzen 5 7600X. For now, the 7900X is second only to the 7950X, and while some of the differences between these two are significant, like the number of cores and execution threads, there are also many similarities too. But the improvements over the previous Zen 3 architecture are exceptional: a 13% increase in average IPC (instructions per clock) and 5 GHz plus boost clocks. Furthermore, AMD’s Ryzen processors also promise to be up to 75% more power efficient than their counterparts from Intel. 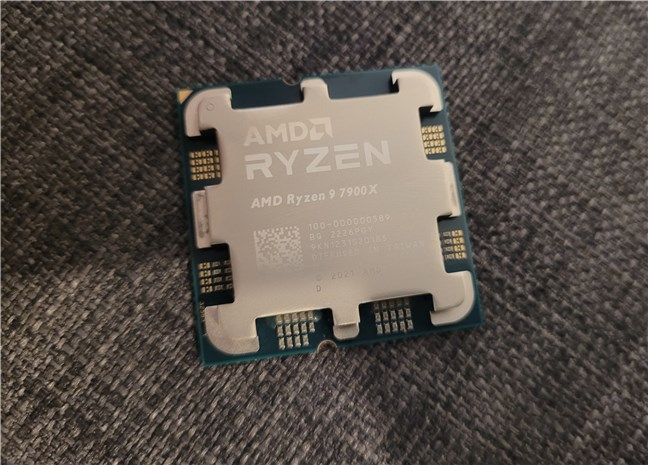 Although the overall cost of switching to the AMD Zen 4 platform is quite high, as you also have to spend a considerable amount of money on a new AM5 motherboard plus DDR5 RAM, the prices of the Ryzen 7000 series are not exactly over the top. For instance, the Ryzen 9 7900X that we’re analyzing in this review is available for a recommended price of 549 USD. Considering what it offers, I believe this price is OK. Speaking of which, let’s walk through its main specs for a bit: 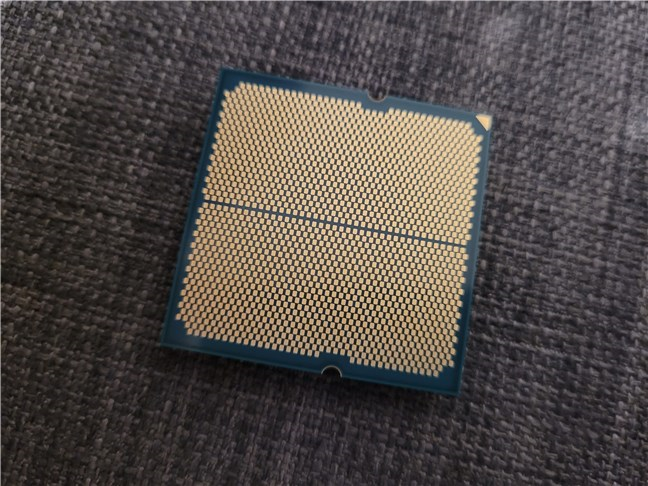 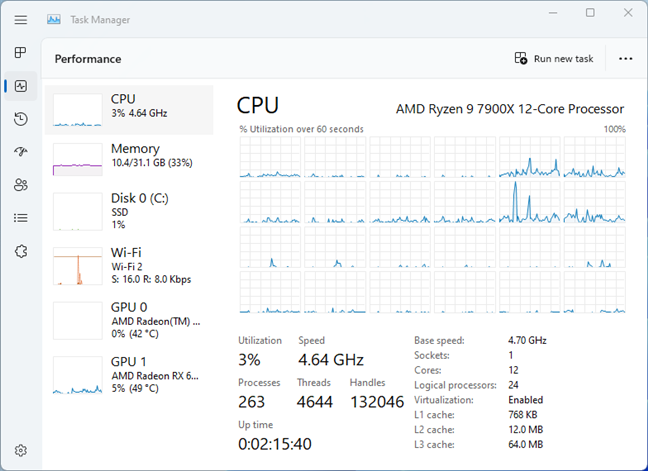 I’ve briefly mentioned earlier that you’ll need to buy DDR5 RAM if you intend to get a Ryzen 7000 processor. That’s because these CPUs, including the Ryzen 9 7900X, only work with DDR5. The standard spec for it mandates a speed of 5200 MT/s (megatransfers per second), but anything higher will do. Actually, DDR5 memory with a speed of 6000 MT/s is what you should aim for, as that’s the sweet spot in terms of price per performance value. Also, when browsing stores for RAM, you might want to look for DDR5 that’s compatible with AMD EXPO (Extended Profiles for Overclocking). These profiles let you easily and quickly set the best timings and frequency for your RAM. 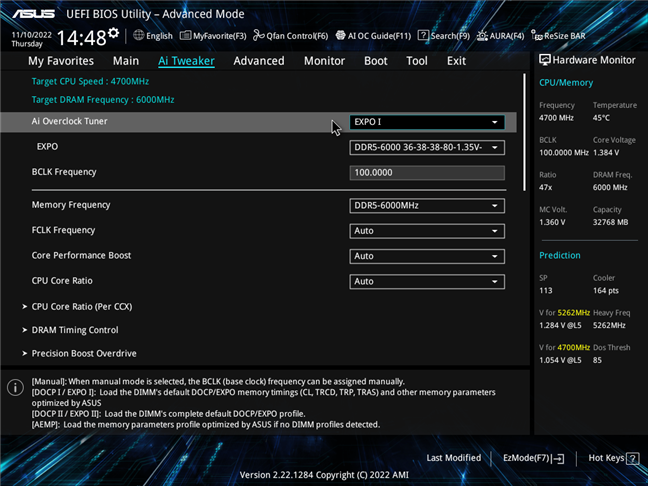 AMD’s Ryzen 9 7900X default TDP (Thermal Design Power) might seem high at first glance: 170 Watts. While it certainly is, you should keep in mind that this energy consumption is something encountered only in demanding tasks such as video rendering or benchmarks. In daily use and in gaming, the processor doesn’t draw this much power. Unfortunately, AMD doesn’t bundle coolers with its new processors and recommends AIO coolers for them, so you should also take that into account if you want to buy a Ryzen 9 7900X processor. 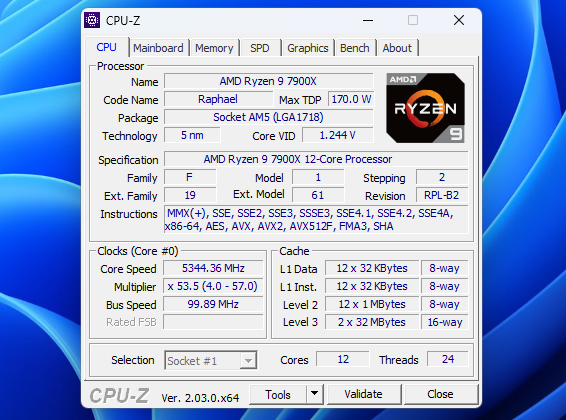 The AMD Ryzen 9 7900X CPU uses the AM5 socket and supports PCI Express 5.0. There are four AMD chipsets that feature the AM5 socket: X670E, X670, B650E, and B650. Your choice of motherboard depends on how much you want to have PCIe 5.0. Motherboards based on the X670 chipset offer four PCIe 5.0 lanes for an M.2 solid-state drive, and those based on the B650 chipset might or might not offer any PCIe 5.0 lanes depending on what the motherboard manufacturer decided. Moreover, these two chipsets come with PCIe 4.0 for the x16 graphics slot, so take that into account. If you want PCIe 5.0 for both the GPU port and additional SSD slots, look for motherboards with X670E or B650E chipsets (E comes from Extreme) that feature 20 PCIe 5.0 lanes.

Spec-wise, the Ryzen 9 7900X looks like a very powerful desktop processor. With a large number of cores and threads, as well as with a high boost clock (5.6 GHz!), this CPU should deliver impressive performance in any kind of workload, be that gaming, productivity, or digital content creation.

The computer on which I reviewed the AMD Ryzen 9 7900X processor has the following hardware and software:

To see what to expect in real life from the AMD Ryzen 9 7900X, I compared its results in benchmarks and games with those I got using an:

The first benchmark I ran was the one offered by the CPU-Z app. In its Single-thread performance test, the AMD Ryzen 9 7900X got an exceptional result: 783 points! That’s actually a bit more than what the more powerful Ryzen 9 7950X managed, although it falls within the margin of error. But what’s important to notice is that the CPU offers an increase in performance of over 18% compared to its forefather, the AMD Ryzen 9 5900X. 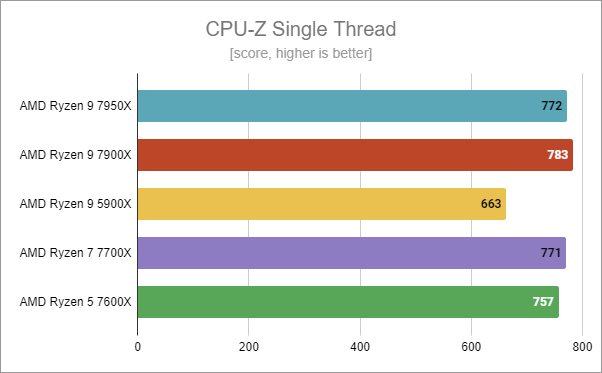 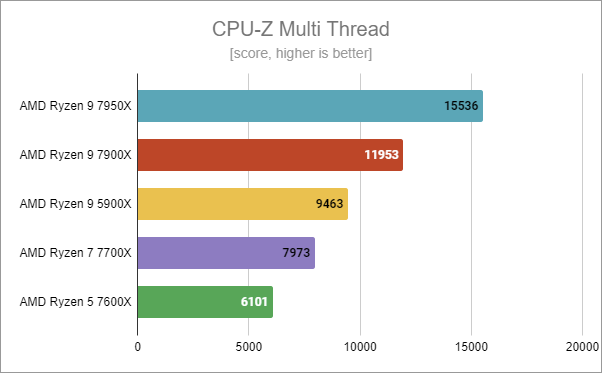 Moving on to the rendering benchmarks, the first one I ran was Cinebench R23. Here, the AMD Ryzen 9 7900X achieved a score of 28900 points. Although it has the same number of cores and threads as its AMD Ryzen 9 5900X predecessor, the Ryzen 9 7900X offers a 39.50% increase in performance! 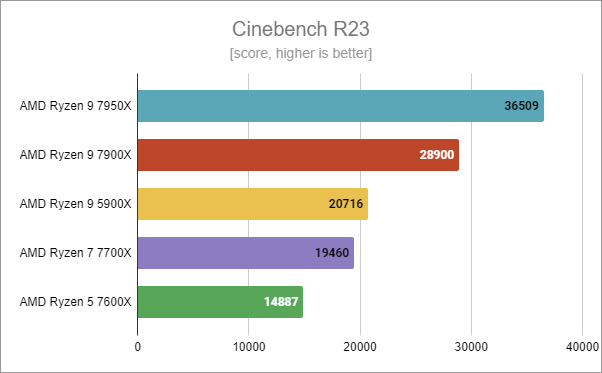 In the second rendering benchmark I ran, Blender, the AMD Ryzen 9 7900X got 465 points, leaving the Ryzen 9 5900X in the rearview mirror with a 43% performance increase. 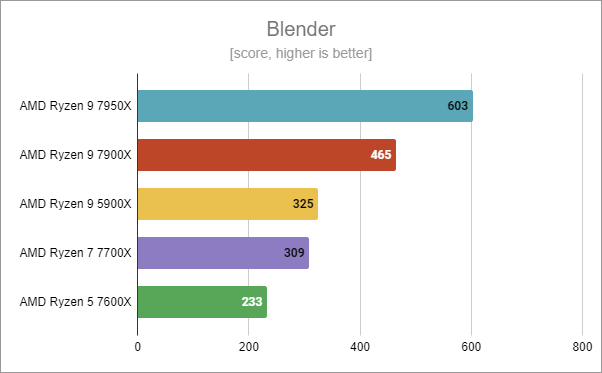 The next benchmark in the toolkit is PCMark 10, which measures the real-life performance of the whole computer in daily tasks such as browsing the web, video conferences, working with office apps, and creating digital content. The Ryzen 9 7900X amazed me once more, as it proved to be faster than all the other processors in the chart. It even overtook the Ryzen 9 7950X, although I have to re-state that the PC I had for the latter was different than the one used for the Ryzen 9 7900X (similar hardware but older Windows 11 version and drivers). 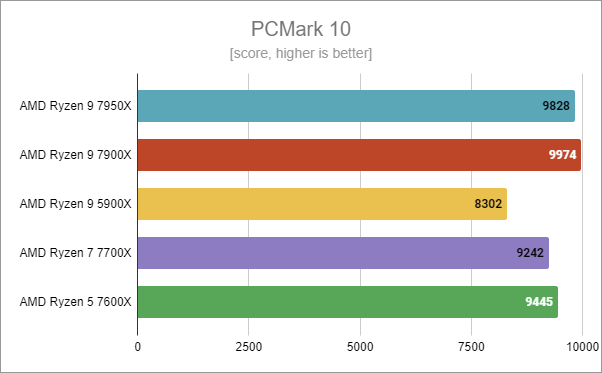 Another important thing is how fast a PC and, evidently, the processor is when browsing the internet. That's what the JetStream 2 browsing benchmark is for. Running it in Google Chrome showed that the AMD Ryzen 9 7900X is a very fast processor, as it was able to achieve a very high score: 319 points. Although all within the margin error, the Ryzen 9 7900X was theoretically a bit slower than the Ryzen 9 7950X and also a bit behind the Ryzen 7 7700X. On the other hand, it offers a performance increase of 21% compared to the old Ryzen 9 5900X. 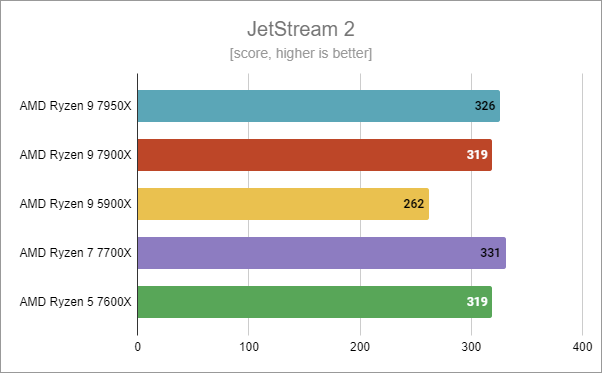 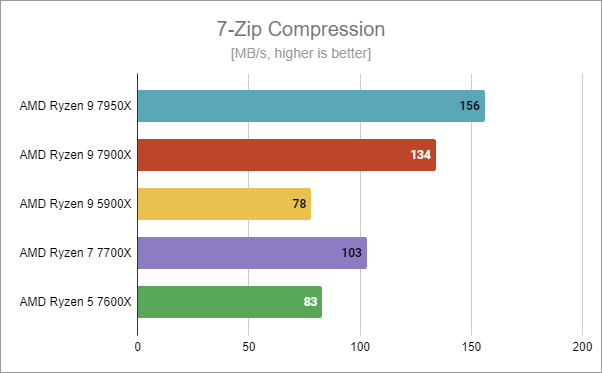 The improvement in decompression speed over the old Ryzen 9 5900X is not that huge, but it’s still significant: 21%. 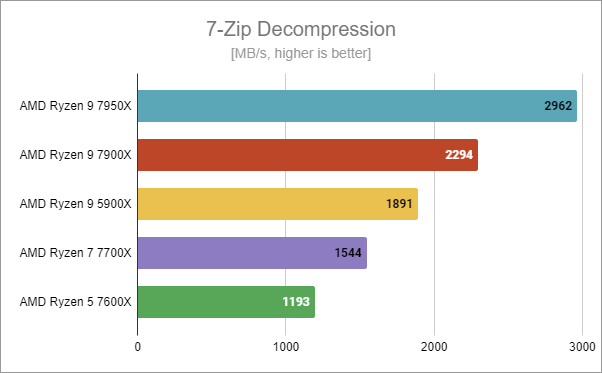 Next, I switched to the gaming benchmarks. Note that, in order to avoid GPU bottlenecks as much as possible, the games I tested were set to run in 1080p resolution and use the lowest graphics quality settings.

First, I used the 3DMark synthetic benchmark. One of the tests it includes, CPU Profile, is designed to measure the gaming performance of the processor only, using different numbers of its cores. The result I’m interested in most is the all-thread score because most modern games know how to work with multiple cores. The AMD Ryzen 9 7900X managed a score of 13140 points - a 23% performance increase compared to an AMD Ryzen 9 5900X! 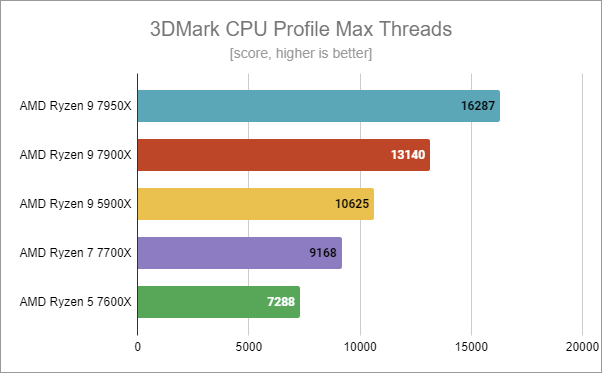 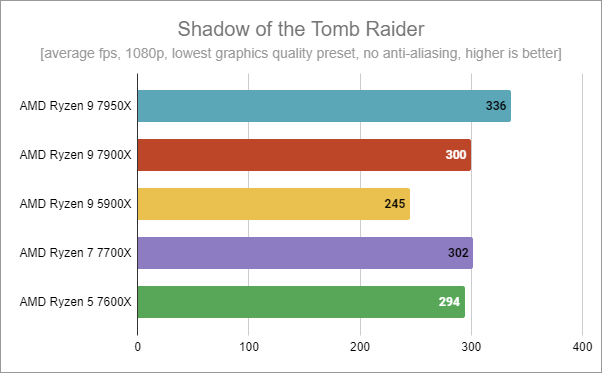 In Metro Exodus, an extremely demanding game, I saw an average of 315 frames per second. While similar to the other Ryzen 7000 processors, the performance increase from the Zen 3 Ryzen 9 5900X is 21%. 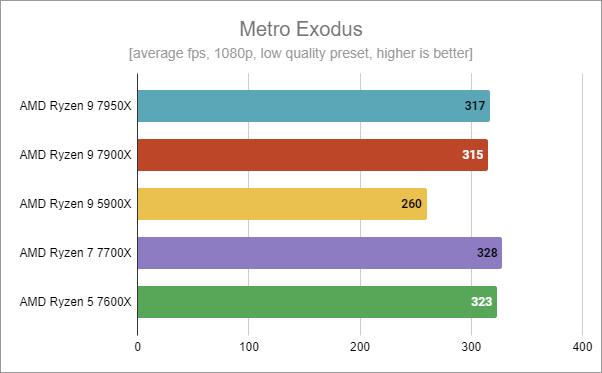 In Cyberpunk 2077, the AMD Radeon RX6800 is likely to have become a bottleneck for the AMD Zen 4 processors, as the average framerates were quite similar. However, the Ryzen 9 7900X offered a 6% fps increase. 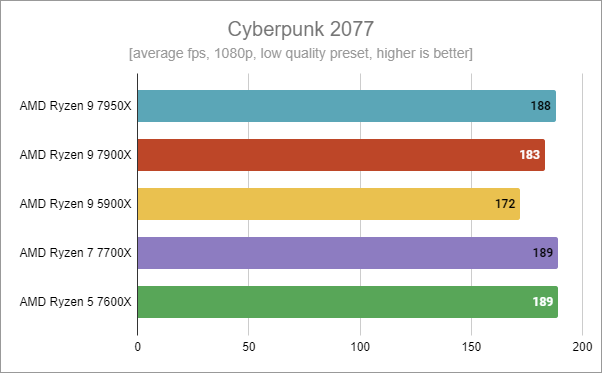 The last game I checked was Assassin's Creed Valhalla. Like in Cyberpunk 2077, the graphics card seems to have bottlenecked the Ryzen 7000 processors, as they all stopped at 204~205 frames per second. However, the increase in performance from the Ryzen 9 5900X is still visible: (at least) 6.8%. 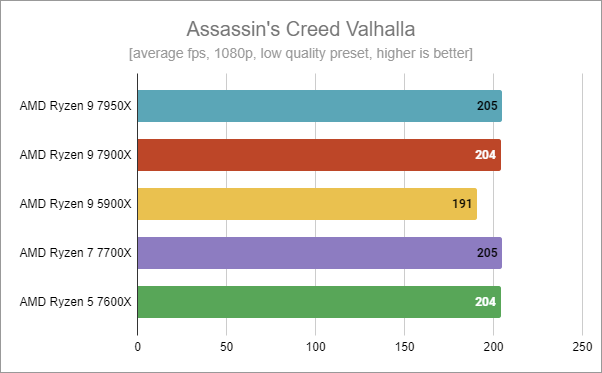 Both during the previous benchmarks and while running Prime95, I monitored the temperature of the AMD Ryzen 9 7900X. As you can see in the chart below, it reached a maximum of 95 degrees Celsius (203 Fahrenheit), which is exactly what AMD says is normal. Although it’s a high number, the processor won’t malfunction at this temperature. However, it proves once more that you’ll need a good AIO cooling solution for it. 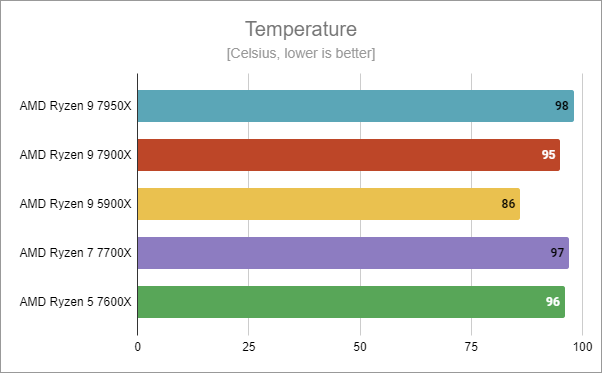 As for the power consumption, the maximum I’ve witnessed while running Prime95 was 221 Watts. It’s a lot, but it only happens in extremely demanding situations. In gaming and everyday activities, it won’t come near that. And considering the performance you get from this processor, I say it’s worth it. 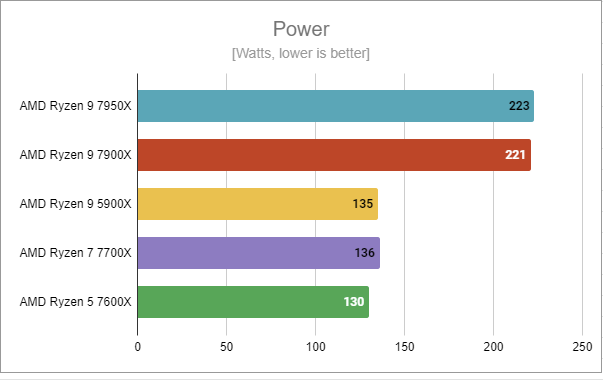 The AMD Ryzen 9 7900X is decisively one of the best desktop processors you can get today. It has more than enough cores and threads to perform extraordinarily in any workload, be that productivity apps, digital content creation, or gaming.

Now you know more about the AMD Ryzen 9 7900X and what it can really do. You know its specs, and you know what the benchmarks and games have to say about it. Are you thinking of buying it and moving on to the AM5 platform? Or is the overall cost associated with a new motherboard and DDR5 keeping you away from it? Let me know in the comments below.