While any path to building a desktop computer based on a brand new AMD Ryzen 7000 processor is expensive, some choices are better than others. For instance, ASUS has a motherboard based on the high-end X670E chipset, called ASUS Prime X670E-Pro WiFi, which could be classified as mid to high-end. As you’ll find out from this review, it looks beautiful, and it offers extended PCI Express 5.0 support as well as other excellent features such as Wi-Fi 6E connectivity. Would you like to know what to expect from the ASUS Prime X670E-Pro WiFi? Then, by all means, read on:

The ASUS Prime X670E-Pro WiFi is the motherboard you should get if:

The most positive aspects of the ASUS Prime X670E-Pro WiFi are:

There are no downsides to this motherboard, as far as I can tell.

After testing a couple of different AM5 motherboards and checking the specs and details of more than just a few, I can say that the ASUS Prime X670E-Pro WiFi is my favorite one so far. It’s one of the most balanced motherboards you can get for AMD Ryzen 7000 processors. Based on the high-end AMD X670E chipset, it offers extended PCI Express 5.0 connectivity, including for the x16 graphics slot and solid-state drives, as well as 2.5 Gbps Ethernet and WiFi 6. While the performance you get for the processor is similar to what you’d get from a mid-range B650 chipset, the other features of the motherboard make all the difference. Overall, the ASUS Prime X670E-Pro WiFi is a fantastic mid to high-end motherboard that gets five stars with a warm recommendation from my part and our “Editor’s Pick” badge.

The Prime X670E-Pro WiFi motherboard comes in a good-looking box with a rather conservative design. It’s made of premium cardboard and uses mainly shades of gray. On the top cover, you get to see what the motherboard looks like, as well as some details about it. You can find additional (more technical) information on the back. 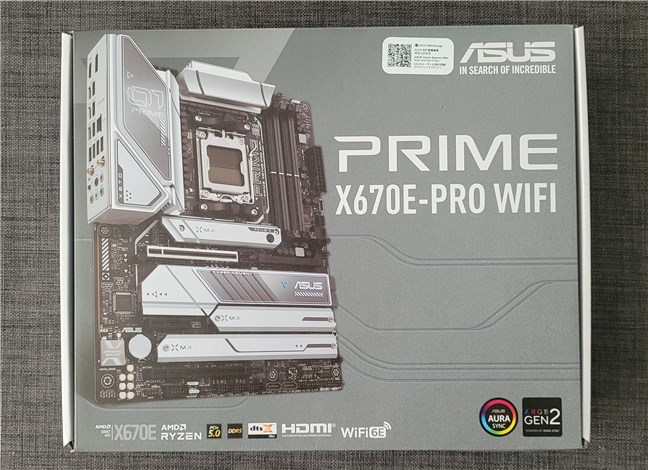 The box of the ASUS Prime X670E-Pro WiFi

The contents of the box are generous: two SATA 6Gb/s cables, an ASUS Wi-Fi antenna kit, M.2 screws and rubber pads (for solid-state drives), a Q-Connector (helpful to connect the front panel of your PC case), a driver DVD, the warranty, and the user manual. 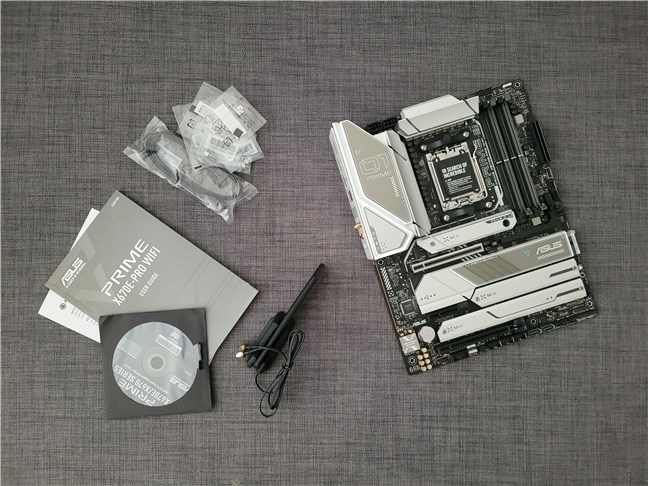 Unboxing the ASUS Prime X670E-Pro WiFi is a satisfying experience: the package looks good, and the contents of the box are generous.

The ASUS Prime X670E-Pro WiFi has a standard ATX form factor, measuring 30.5 cm (12 inches) in length and 24.4 cm (9.6 inches) in width. It’s based on the high-end AMD X670E chipset, which is designed to deliver not only high performance for AMD Ryzen 7000 processors but also as many PCI Express 5.0 lanes as possible. Obviously, the motherboard comes with an AM5 socket and supports only DDR5 memory, just like all the other motherboards based on AMD’s latest chipsets (X670, B650E, B650). 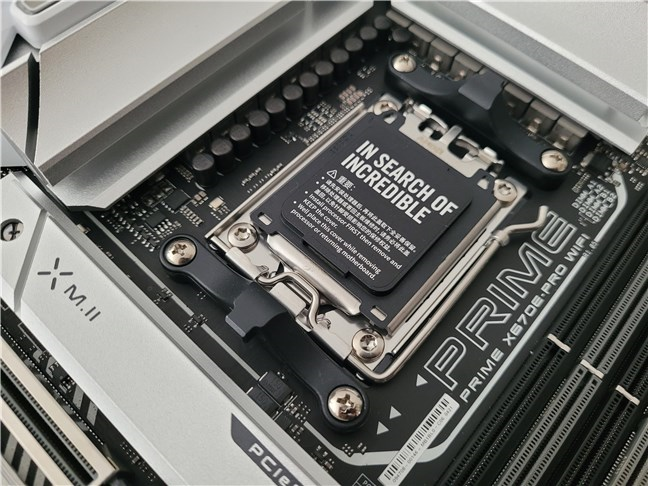 As is the case with all the motherboards in ASUS’ Prime series, the design of the ASUS Prime X670E-Pro WiFi is relatively conservative. This motherboard is colored in gray and white, and it looks professional and elegant. Everything on it appears to be high-quality, from capacitors to slots and heatsinks. Both the CPU VRM, the M.2 drives (solid-state drives), and the chipset are covered by massive heatsinks. Not only do they appear to be doing a very good job at thermoregulation, but they also look great with their white/light gray contrast on top of the darker motherboard PCB (Printed Circuit Board). 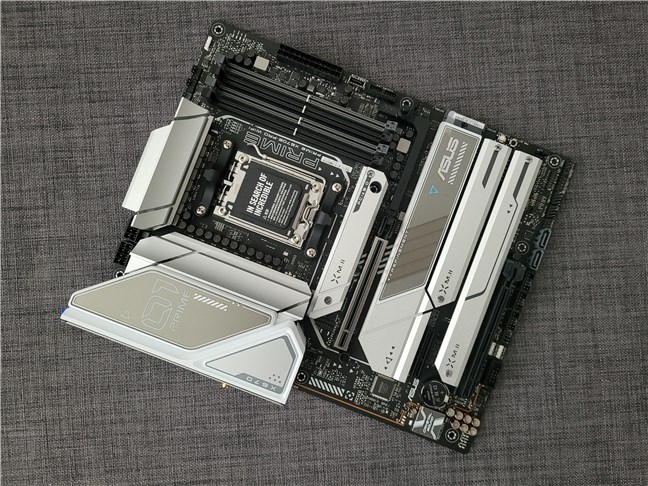 Considering the large heatsinks on the VRM and the fact that the ASUS Prime X670E-Pro WiFi has 14+2 power stages able to handle 70 amperes each, this motherboard should be great for overclocking. By the way, the electrical energy required by the CPU is delivered via two standard 8-pin (12 Volts) EPS power connectors. 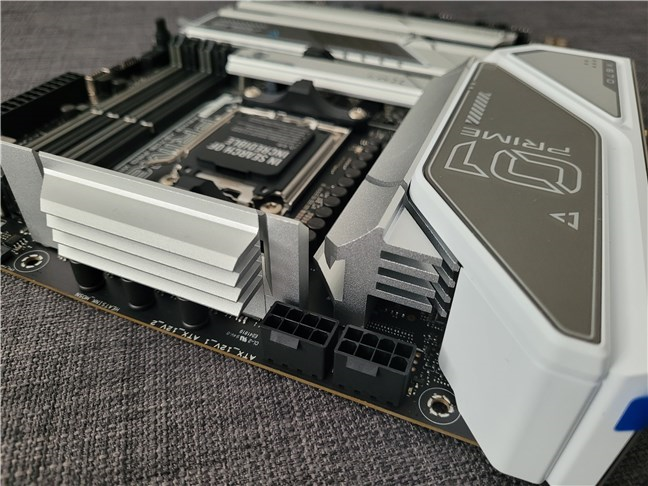 The main 24-pin ATX power connector is found towards the top-right corner. Close by, there are four DIMM slots that can accommodate four DDR5 memory modules with a maximum capacity of 128 GB. The motherboard can work with DDR5 running at 4800 MT/s (mega transfers per second) and upwards. Although you could even get RAM with a speed of 6400 MT/s or even more (anything above 5200 MT/s will work in overclocking mode), the sweet spot for AMD Ryzen 7000 processors is 6000 MT/s. That offers the best price-per-performance ratio. 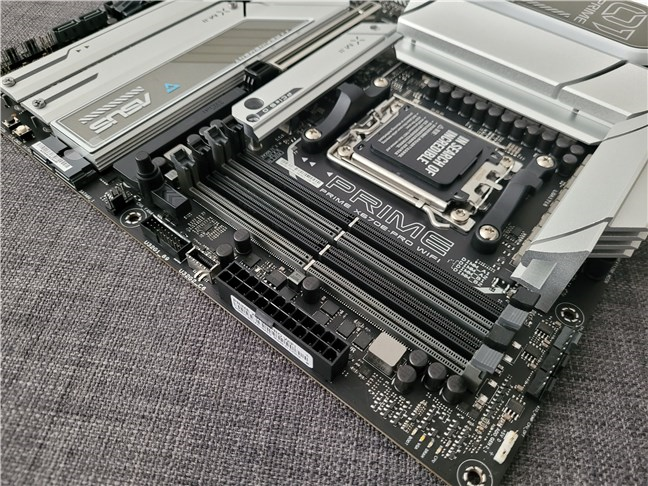 In terms of expansion and storage slots, the motherboard is more than generous. Using the processor’s PCI Express lanes, you get:

Routed to the AMD X670E chipset’s PCI Express lanes, there are: 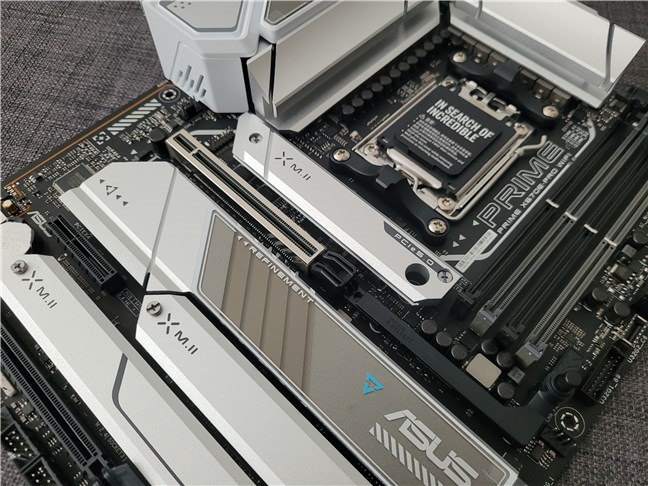 The connectivity area is also high-end: the motherboard comes with a 2.5 Gbps Realtek Ethernet chip and a MediaTek RZ608 Wi-Fi 6E chip. The latter features 2x2 MIMO, support for 802.11 a/b/g/n/ac/ax standards on the 2.4, 5, and 6 GHz frequency bands, and Bluetooth 5.2. The audio part is covered by a Realtek S1220A 7.1 Surround Sound High Definition Audio CODEC that supports up to 32-Bit/192kHz playback. 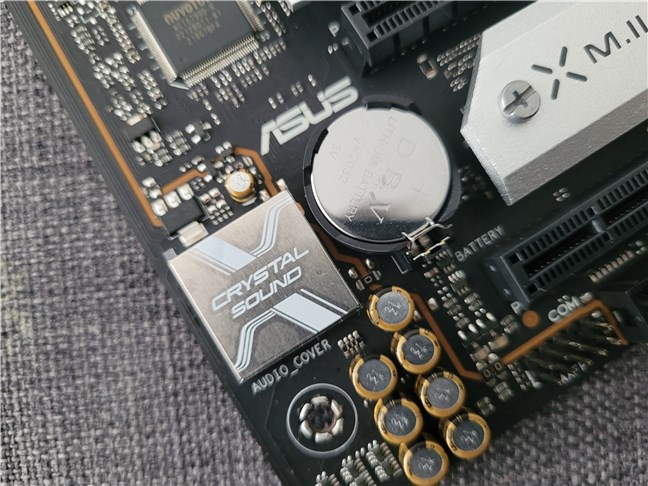 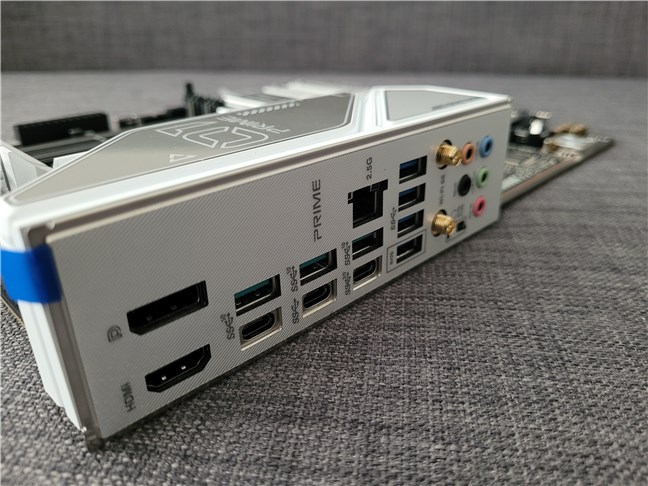 The I/O panel on the ASUS Prime X670E-Pro WiFi

The internal I/O connectors available on the motherboard include CPU and case fan headers, AIO and water pump headers, and RGB headers. You also get one USB 3.2 Gen 2 connector (supports USB Type-C) and USB 3.2 Gen 1 header that supports two additional USB 3.2 Gen 1 ports, and three USB 2.0 headers that you can use to add another six USB 2.0 ports. Moreover, there’s a COM Port header (useful for those who still use legacy devices), a front panel audio header, a power and a Clear CMOS button, and even a Thunderbolt header. 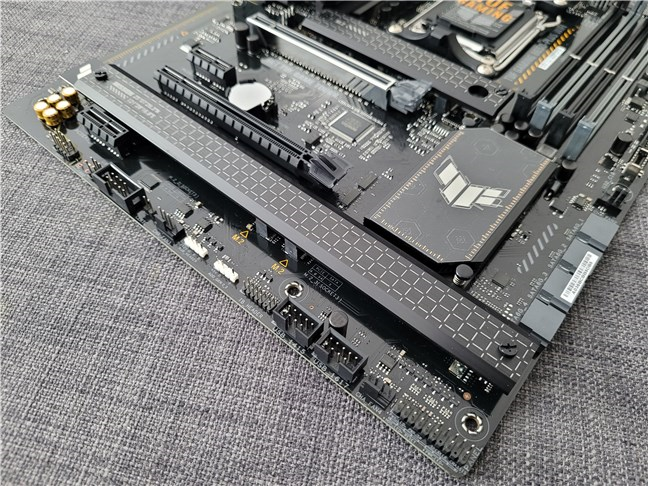 Internal headers and ports on the ASUS Prime X670E-Pro WiFi

I’ve only scratched the surface in terms of technical specs, so if you want to see everything this motherboard offers, you should get into details on its official webpage: ASUS Prime X670E-Pro WiFi Tech Specs.

The ASUS Prime X670E-Pro WiFi is a mid to high-end motherboard. Based on the feature-rich AMD X670E chipset, it offers everything you might want from a modern-day mainboard, and more. Together with PCI Express 5.0 drives, DDR5 memory, a fast graphics card, and an AMD Ryzen 7000 processor, you’ll get a very powerful computer.

Turn the page to see what a test computer based on the ASUS Prime X670E-Pro WiFi motherboard can do in benchmarks and games.