2022 brought us a slew of new and amazing desktop processors, and one of the most interesting ones is AMD’s Ryzen 5 7600X. It is a top-notch processor for gaming, as well as standard workloads, at a price that many people can afford. However, even if it’s an excellent choice already, some will nonetheless try to overclock it. Because why not? If you can get some extra performance for free, would you say no? I know I wouldn’t, and that’s why I decided to overclock my AMD Ryzen 5 7600X processor and see what I can get from it. Here’s how it all worked out:

The Ryzen 5 7600X has six physical cores and twelve threads running at a base clock of 4.70 GHz. By default, it can boost up to 5.3 GHz, but if you have a good AIO cooler, it’s possible to see even higher boost frequencies. For instance, on my test computer, using a Cooler Master MasterLiquid ML360R RGB AIO solution, I’ve seen it reach 5.45 GHz without any overclocking!

Equipped with 6 MB of Level 2 cache and 32 MB of Level 3 cache, the processor’s cores are built on a 5-nanometer manufacturing process, and, despite running at high frequencies, it’s still power efficient, featuring a default TDP of 105 Watts. 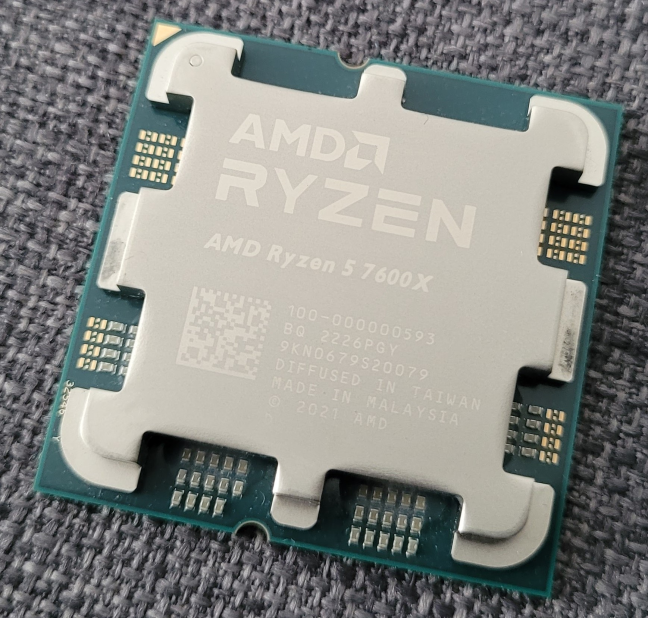 As it doesn’t heat as fast and as much as the more powerful processors in the Ryzen 7000 family, the AMD Ryzen 5 7600X seems like a better candidate for overclocking. It also comes with an unlocked multiplier, and because all the CPU cores are on the same core complex (CCX), you don’t have to worry about setting different frequencies on different (multiple) CCX’s as would be the case for the other Ryzen 7000 processors.

The results you get when attempting to overclock a processor are determined by many factors, especially the cooling solution you use and the other hardware in your desktop PC. Things like a good power supply unit and a motherboard capable of sustaining the electrical energy demands of the CPU are essential. Here’s the hardware configuration I used to overclock the AMD Ryzen 5 7600X:

I wanted to perform an all-core overclock for the AMD Ryzen 5 7600X processor, and for that, I used the settings and options available in the UEFI BIOS of the motherboard. I prefer this path, although you could also use AMD’s Ryzen Master software for the same purpose.

It took some time to tweak the voltages and frequencies in order to get the AMD Ryzen 5 7600X to run stably. The maximum speed I could safely run it was 5.35 GHz at a voltage of 1.35. Going further than that would make the system unstable and crash each time I launched a benchmark. 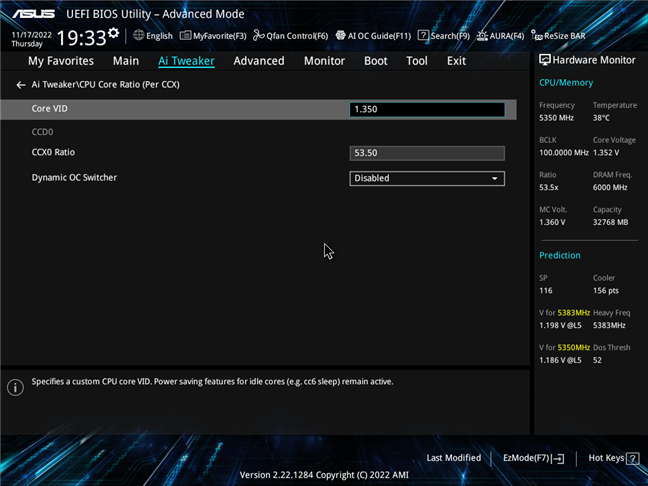 Looking closely at the numbers, overclocking the AMD Ryzen 5 7600X to 5.35 GHz meant a frequency increase of 13.83% from the default base clock of 4.7 GHz. It’s also 500 MHz higher than the official boost frequency advertised by AMD for this processor, although, as mentioned earlier, on my test computer, it could go even higher without any overclocking involved. Also, don’t forget that I’ve done an all-core overclock, which means that all six cores of the AMD Ryzen 5 7600X were constantly and simultaneously running at the same frequency of 5.35 GHz. 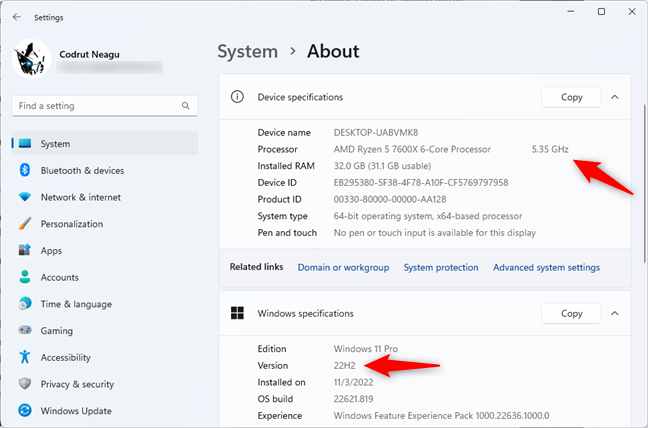 To measure the impact of overclocking, I ran the same benchmarks twice, once with the processor set at default clocks and once with its frequency set at 5.35 GHz. The operating system I used was Windows 11 Pro, version 22H2, and the PC had the latest available drivers installed. Here are the overclocking results in benchmarks and games:

I started with CPU-Z’s benchmark tool. In the Single Thread test, the AMD Ryzen 5 7600X overclocked at 5.35 GHz scored 751 points. That’s actually a bit lower than the 757 points the benchmark measured for the AMD Ryzen 5 7600X running at stock speeds. The decrease in performance is, however, insignificant and within the margin of error: 0.79%. 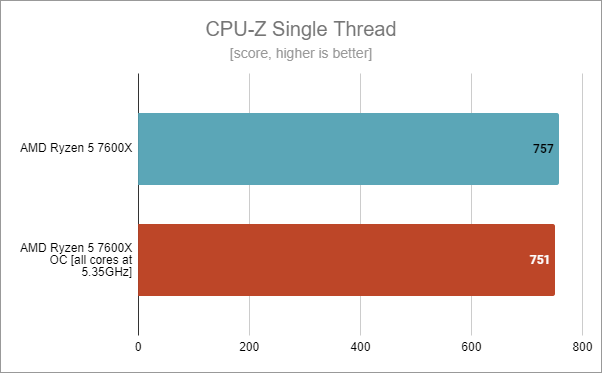 In CPU-Z’s Multi Thread test, the overclocked AMD Ryzen 5 7600X scored 6145 points. The opposite happened here: I got a tiny 0.72% increase in performance compared to running the processor at default speeds. But this is again such a small difference that it falls within the testing’s margin of error. 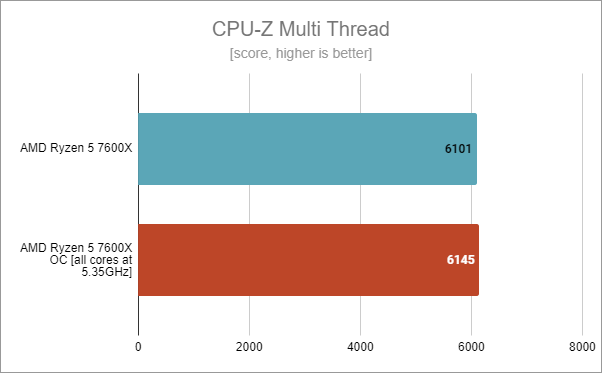 In Cinebench R23, the overclocked AMD Ryzen 5 7600X was faster. This time, the increase in performance compared to the factory version of the CPU was, let’s say, more noticeable: 2.74%. 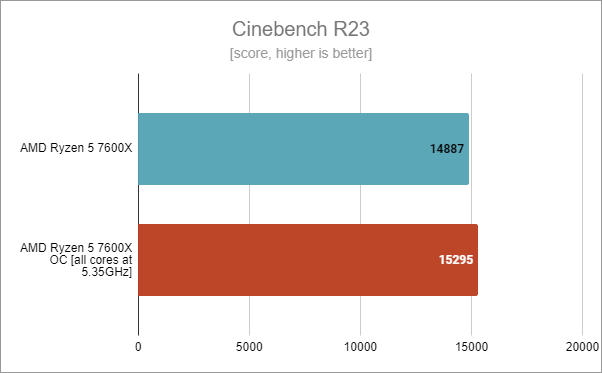 In Blender, the overclocked Ryzen 5 7600X was also faster. The improvement I measured, compared to when running at factory clocks, was 2.57%. It’s not much, but it’s there. 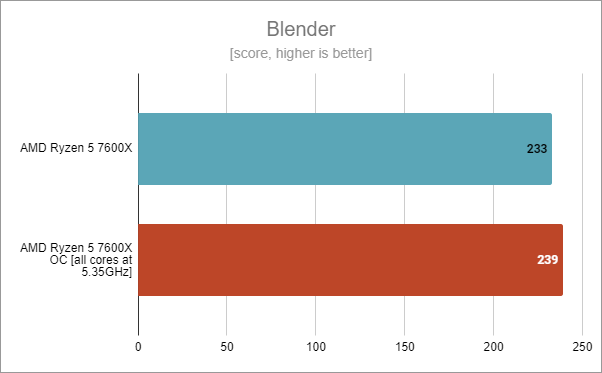 Next, I ran PCMark 10 to see if it’s worth overclocking the AMD Ryzen 5 7600X if you’re mostly interested in performance in daily computing tasks such as web browsing, video conferencing, productivity, and digital content creation. In this benchmark, the overclocked AMD Ryzen 5 7600X offered a speed increase of only 1.37% over the stock version. 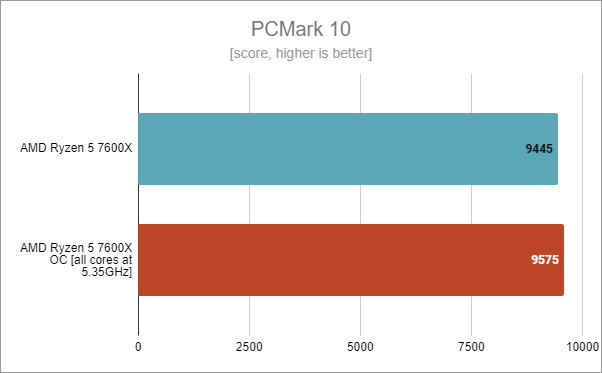 In 7-Zip’s benchmark tool, the overclocked AMD Ryzen 5 7600X was just as fast as its non-overclocked version while testing the file compression speed. 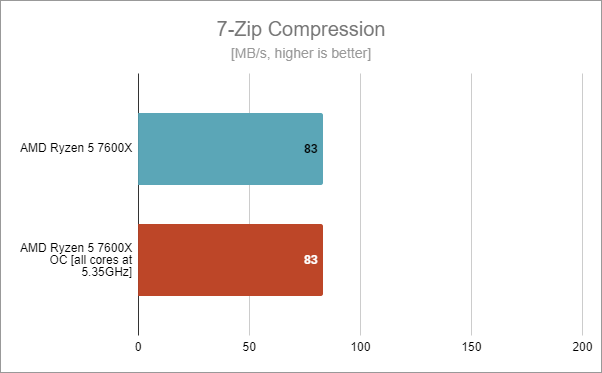 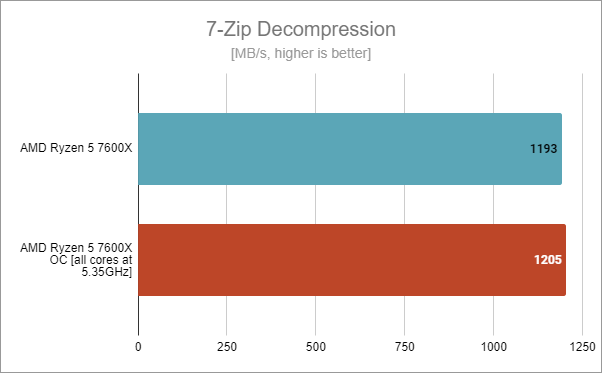 To test the speed of the CPU when browsing the web, I ran the JetStream 2 benchmark in Google Chrome. The AMD Ryzen 5 7600X set to run at default clock speeds was faster than overclocked. The decrease in performance was small, 0.99%, but present nonetheless. 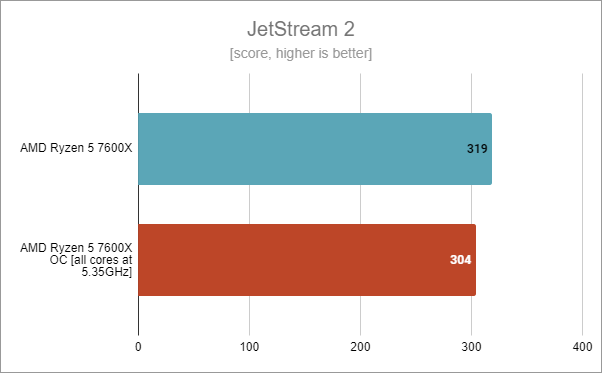 Next, I moved on to the gaming benchmarks, which I believe some of our readers will be most interested in. After all, if you decided to overclock your processor to squeeze every bit of performance out of it, you’re probably either a gamer or a digital content creator. Note that for all games, I used the 1080p resolution and the lowest graphic settings available in order to avoid potential bottlenecks from the graphics card.

I started with 3DMark’s CPU Profile test, a synthetic gaming benchmark. While it’s not a game itself, this test is useful to get an idea of how the processor performs in games. Using all its threads, the AMD Ryzen 5 7600X got 7288 points when running at factory frequencies and 7320 points when overclocked at 5.35 GHz. That’s only a 0.43% improvement, which is so insignificant that it falls within the test’s margin of error. 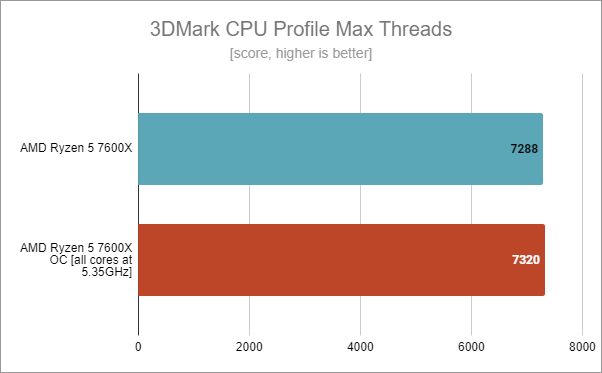 In Shadow of the Tomb Raider, the results were better with the non-overclocked AMD Ryzen 5 7600X. Overclocking it meant a framerate decrease of 32 fps, which is about 10.88%. This is quite a significant change, one that doesn’t recommend overclocking the AMD Ryzen 5 7600X. 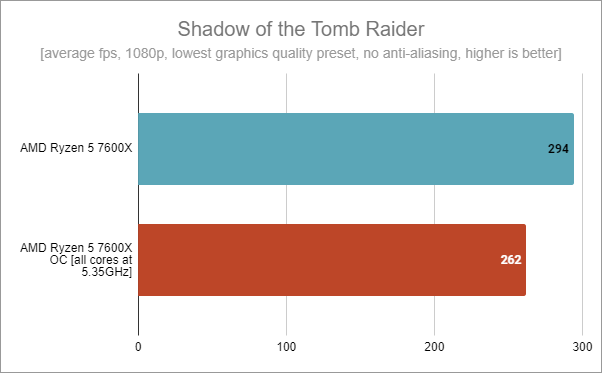 In Metro Exodus, things went the other way: the overclocked AMD Ryzen 5 7600X rendered 8 frames per second more. That translates into a small framerate increase of 2.47%. 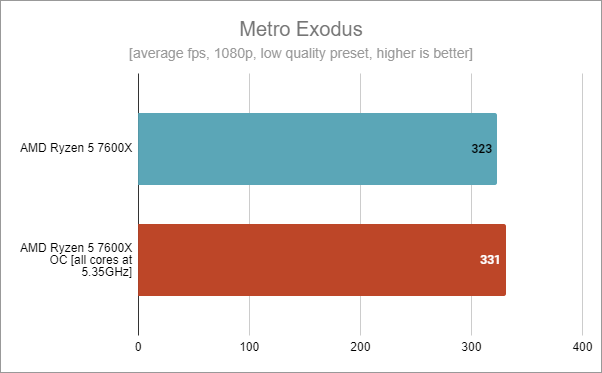 In Assassin’s Creed Valhalla, the overclocked AMD Ryzen 5 7600X rendered three frames more than it did when running at stock clocks. It’s a 1.49% increase, which is negligible and, again, within the margin of error. 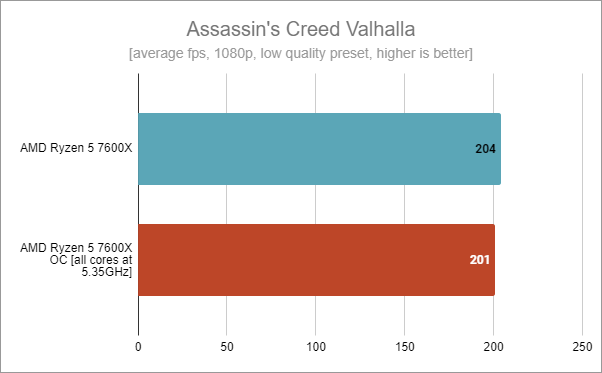 The fourth and last game I tested was Cyberpunk 2077. The average number of frames per second I measured with the AMD Ryzen 5 7600X running at default clocks was almost the same as the one I got when overclocking it. The 2 frames per second difference is, once more, so small and derisory that it could be looked upon as a testing error. 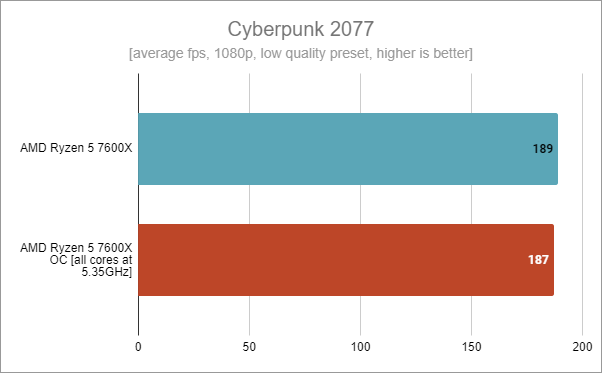 While running the previous benchmarks and games, I monitored the temperatures and power consumption of the processor. The maximum temperature reached by the AMD Ryzen 5 7600X when running at default clocks was 96 degrees Celsius (~205 degrees Fahrenheit), the same as when overclocked. 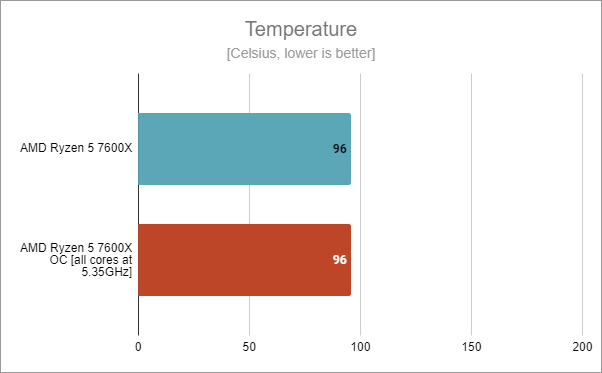 As for the power consumption, the AMD Ryzen 5 7600X drew a maximum of 130 Watts when running Cinebench R23. When overclocked, its wattage was actually a bit lower: 124 Watts. While that made me question whether I could raise the voltage a bit higher, I couldn’t because that made the processor heat too much and too quickly, and my computer would simply restart when running any benchmark. 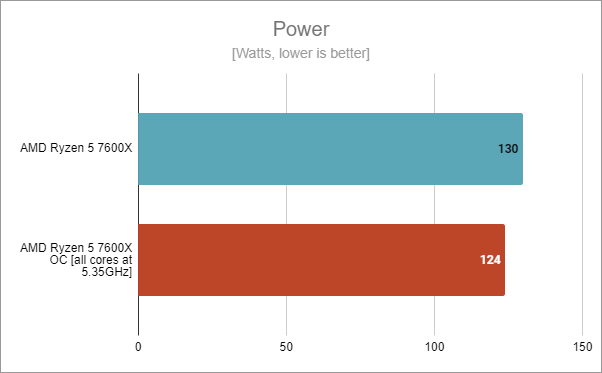 Conclusion: The AMD Ryzen 5 7600X is such a finely tuned processor that it’s not worth overclocking!

The results I got in benchmarks and games convinced me that overclocking the AMD Ryzen 5 7600X is not worth the trouble:

If I put everything into perspective, it’s clear to me that AMD did an amazingly good job at fine-tuning the Ryzen 5 7600X processor. You don’t have to overclock it because it is already running at its maximum potential, and it performs great in any workload and especially in games. While those who like to fiddle with overclocking might be a bit disappointed by my experience, this is very good news for those who want an excellent processor right out of the box, one that simply works and does its best without having to tinker with it.

Did you overclock your AMD Ryzen 5 7600X processor?

Now you know what my experience overclocking the AMD Ryzen 5 7600X desktop processor was like. Did you overclock it too? What was the maximum all-core frequency you could run it without it becoming unstable? Let me know if you have anything to add to the story in the comments section below.