On September 8th, Motorola unveiled three new Android smartphones: the Edge 30 Ultra, Edge 30 Fusion, and Edge 30 Neo. The latter is the first child of a newly announced partnership between Motorola and Pantone, the color experts of the world. Having the pleasure to receive the Motorola Edge 30 Neo in testing as soon as it was launched, I’ve used it daily since. Now, I’d like to share with you my experience with this smartphone, its strengths and weaknesses. If you’re curious to know more about the “fashionable” Motorola Edge 30 Neo, read this review:

Motorola Edge 30 Neo: Who is it good for?

This smartphone is an excellent choice if you:

Here’s what I like about the Motorola Edge 30 Neo:

In my opinion, this smartphone has only one important downside:

The Motorola Edge 30 Neo is a fashionable Android smartphone at a price that many can afford. Marking the first result of the newly-announced partnership between Motorola and Pantone, all the color options available for the Edge 30 Neo look great, especially my favorite one: Very Peri, Pantone’s color of the year 2022. I believe that this smartphone is an excellent choice for anyone looking for a compact smartphone that fits in any pocket and is easy to use with just one hand. I also recommend it for its beautiful display, super fast charging (Samsung should take note), and clean user interface. However, if what you want is a smartphone for gaming or taking good quality photographs and shooting videos in 4K, then you might want to check the market for alternatives.

The Motorola Edge 30 Neo smartphone comes in a minimalist box that’s recyclable and plastic-free. I really appreciate that the company is determined to reduce its environmental footprint. The Motorola logo and the name of the Android phone are printed in soy ink on the top of the box, and a small sticker in a corner indicates the color version you get. On the bottom and sides of the box, you find additional details, including another sticker with the hardware specs. And when you open the box, the first thing you see is the Motorola Edge 30 Neo: 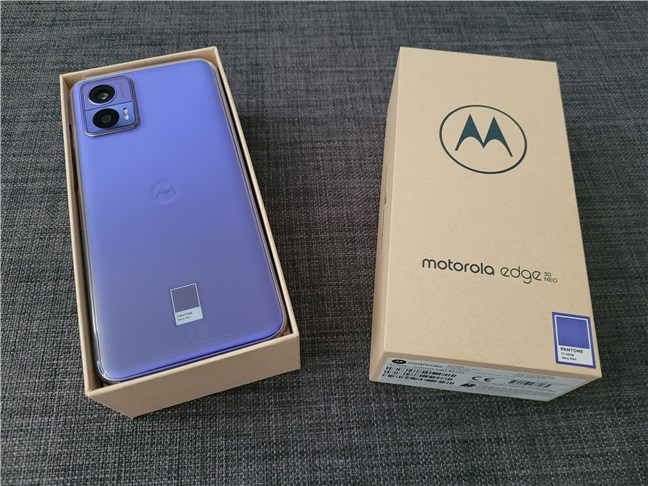 The package of the Motorola Edge 30 Neo

Besides the smartphone, the box also includes a 68W fast charger together with a detachable USB-C to C cable, a transparent silicon cover, a SIM ejection tool, and all the usual documents (user manual, warranty, safety information). 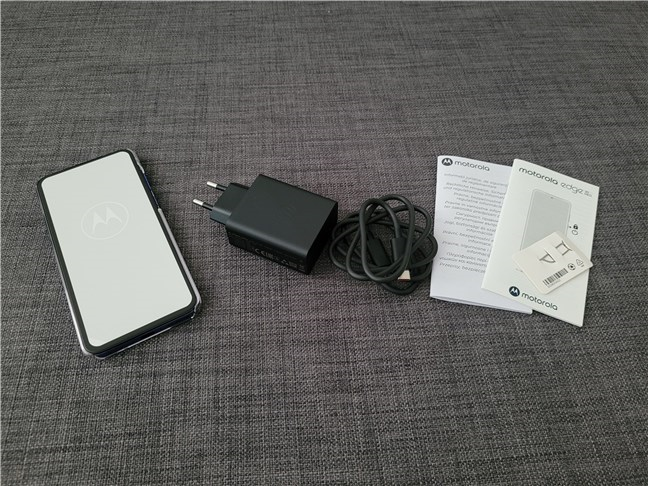 The unboxing offered by the Motorola Edge 30 Neo smartphone is a pleasant experience. I appreciate the fact that the packaging is recyclable, as it shows care for the environment. I also like the fact that Motorola bundles a (very) fast charger with the Edge 30 Neo.

Starting with this smartphone, Motorola began collaborating with Pantone in terms of design and colors. The Edge 30 Neo I received was a Very Peri variant, the Pantone Color of the Year 2022. There are three other versions available to choose from too, all using Pantone colors: Black Onyx, Ice Palace, and Aqua Foam. I imagine that the colors and the design of this phone will be attractive to young audiences looking for fashionable devices. 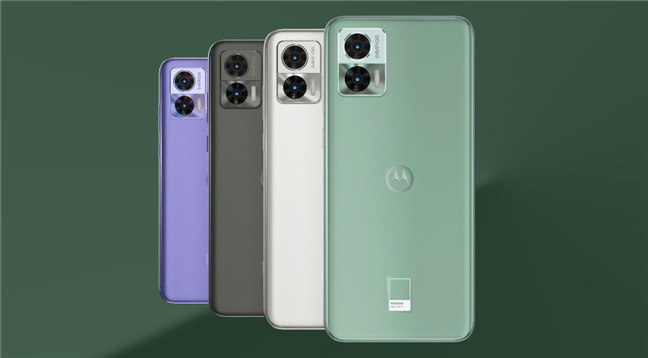 The P-OLED screen looks bright and colorful, its bezels are thin and symmetric, and the only other thing you get on the front is the selfie camera inside a tiny hole at the top center. 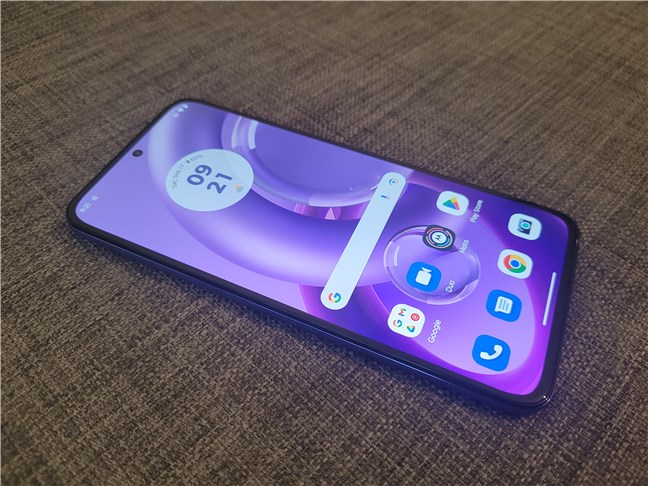 The front of the Motorola Edge 30 Neo

The loudspeaker is found on the bottom edge, together with the USB-C port, the SIM card(s) tray, and a microphone. 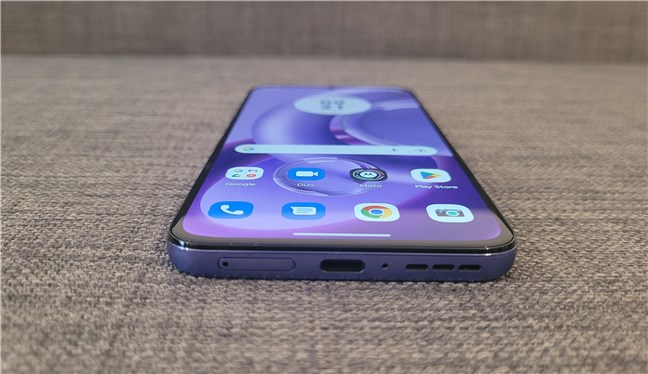 The bottom edge of the Motorola Edge 30 Neo

On the top edge, you only find a Dolby Atmos inscription and the second microphone. But, between the phone’s frame and screen, there’s also a relatively long and extremely thin cutout where the ear speaker resides. 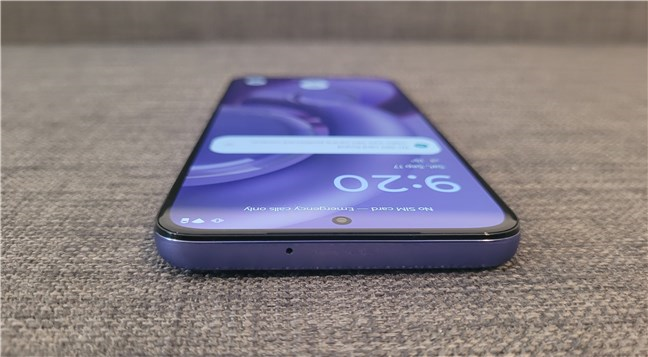 The top edge of the Motorola Edge 30 Neo

The back of the smartphone is made of plastic materials painted in the color you chose for it. I must say that the Very Peri version I had looked great. Also, the plastic back is matte and somewhat “grainy.” That’s nice because it doesn’t slip from your hand easily, but also because it helps keep fingerprints and smudges away. On the other hand, the plastic seems quite prone to gathering scratches. 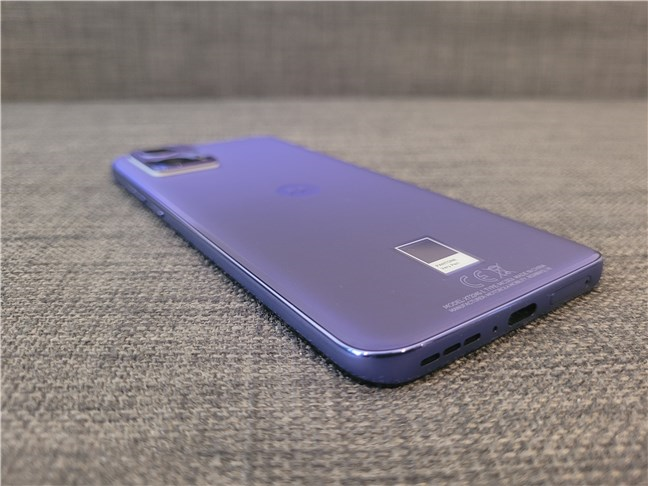 The back of the Motorola Edge 30 Neo

The main camera system is slightly protruding and is divided into two parts: one holding the main 64 MP camera, and one the ultrawide/macro camera and the LED flash. The whole area is surrounded by a white LED band that you can set to light up when you have an incoming call or message, when an alarm is triggered, and also when you’re charging the smartphone. It’s quite a nice feature that I found useful each time I had my phone face down on the sofa. 🙂 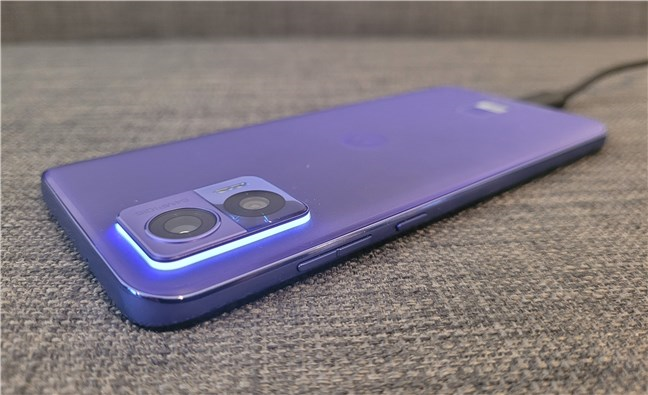 The left edge of the smartphone is void, while the right one is home to the usual Power button and Volume rocker. They’re all found towards the top side of the phone.

The Motorola Edge 30 Neo is a beautiful device, especially in the Very Peri Pantone Color of the Year 2022. This is a compact and lightweight phone that fits in any pocket and is easy to use with only one hand. In short, I believe it’s going to attract a lot of young people.

The Motorola Edge 30 Neo is based on the mid-range Qualcomm SM6375 Snapdragon 695 5G mobile platform. The SoC (System on a Chip) is built on a 6 nm manufacturing process and includes a capable octa-core processor (two 2.20 GHz Kryo 660 Gold cores and six 1.70 GHz Kryo 660 Silver cores) paired with an Adreno 619 graphics chip. The phone also gets enough memory for even the most demanding daily tasks: 6 or 8 GB of RAM, depending on the model you choose, and either 128 or 256 GB of internal flash storage. The one I’m testing in this review has 8 GB of RAM and 128 GB of storage. 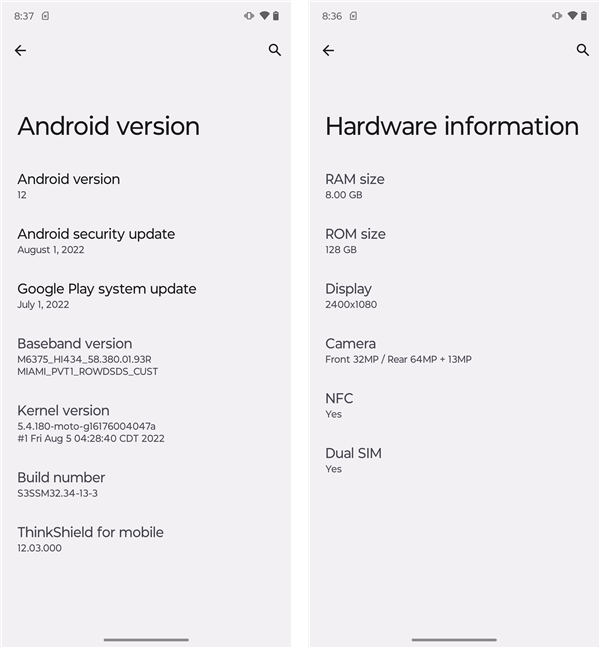 About 113 GB of storage space is actually usable, the rest being occupied by the operating system and bundled apps. Unfortunately, the Edge 30 Neo doesn’t have a memory card slot, so the built-in storage space is all you get - make sure you choose well when you buy it. On the bright side of things, the Motorola Edge 30 Neo supports 5G networks and is also dual SIM (accepting two nano-SIM cards). 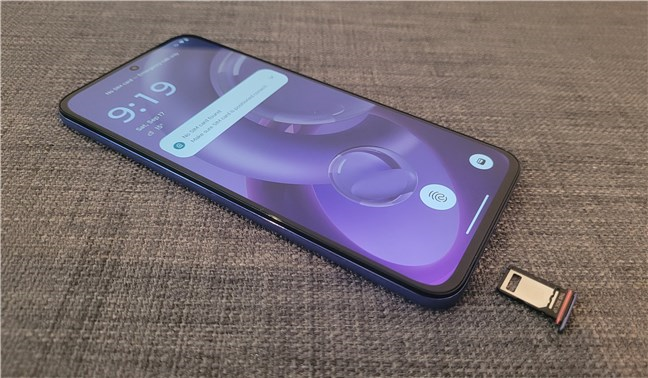 The SIM card tray of the Motorola Edge 30 Neo

The display on the Motorola Edge 30 Neo smartphone is a treat. We get a fairly compact 6.28 inches pOLED screen (plastic-OLED) capable of showing over 1 Billion colors at a resolution of 1080 by 2400 pixels and a refresh rate of 120 Hz. The display has a high pixel density of about 419 ppi (pixel per inch) and is protected by Corning Gorilla Glass 3. 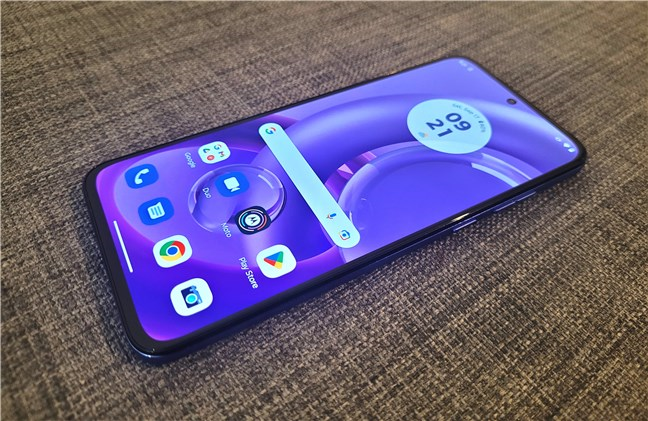 The smartphone benefits from a dual-camera camera system on the back and a selfie camera on the front. Here’s what you get:

The main camera system is backed by a dual-LED flash, and both the main camera and the front one can record videos in 1080p resolution at 30 or 60 frames per second. The ultrawide camera supports video recording in 1080p at 30 fps. In addition, the main camera can also shoot slow-motion videos at 120 fps but is limited to 720p. By the way, as far as I can tell, HDR is available only for photographs, not for videos. 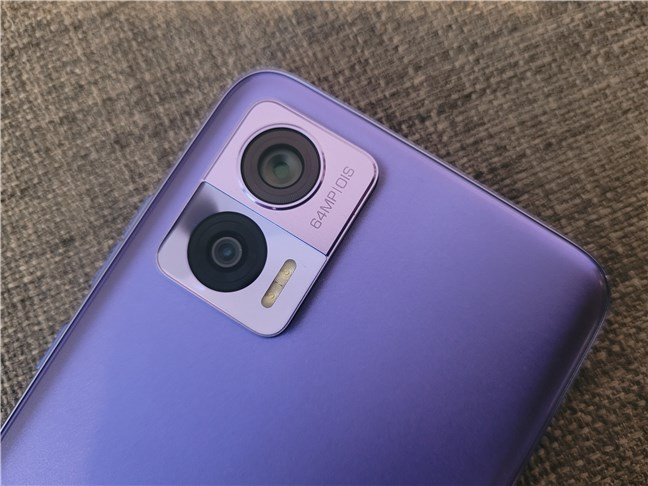 The main camera system on the Motorola Edge 30 Neo

Motorola Edge 30 Neo has a non-removable 4020 mAh battery. That’s slightly less than what I’ve seen on other Motorola smartphones, but it probably helps in keeping the phone light and thin. The good news is that the Motorola Edge 30 Neo supports fast wireless charging at 68 Watts (the packaging includes the right charger for it). The company says that the smartphone can get “power for the day” (about 12 hours of normal use) in just 10 minutes. Additionally, it also has support for (standard) wireless charging at 5 Watts.

In terms of connectivity, the Motorola Edge 30 Neo supports dual-band (2.4 and 5GHz) Wi-Fi 5 (not Wi-Fi 6), Bluetooth 5.1, GPS, and NFC. There’s also an under-display optical fingerprint sensor, as well as all the other basics: accelerometer, proximity, compass.

If you’re curious about the complete list of features and technical specifications, check this webpage: Motorola Edge 30 Neo.

On the next page of this review, you can read more about the user experience offered by the Motorola Edge 30 Neo, its camera quality, performance in benchmarks, and bundled software.