Now, one year after the launch of Windows 11, Microsoft has released its first major update for this operating system (OS): Windows 11 2022 Update or version 22H2. This is only the first of many major updates to come, and many people don’t really know whether they have the latest version installed or not. To help you find the Windows 11 OS version you’re using, read this article. It also teaches you how to find your Windows 11 build number and edition:

The quickest way to find out what version of Windows 11 you have is to use the winver tool. Click or tap on the Search button next to Start, type winver and select the search result bearing the same name. 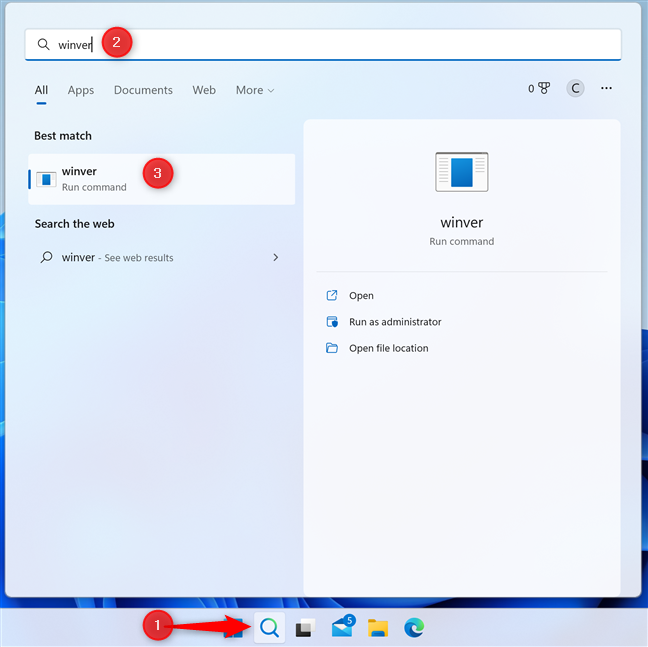 Alternatively, you could press the Windows + R keys to launch the Run window, type winver in its Open text field, and then press Enter or click OK. 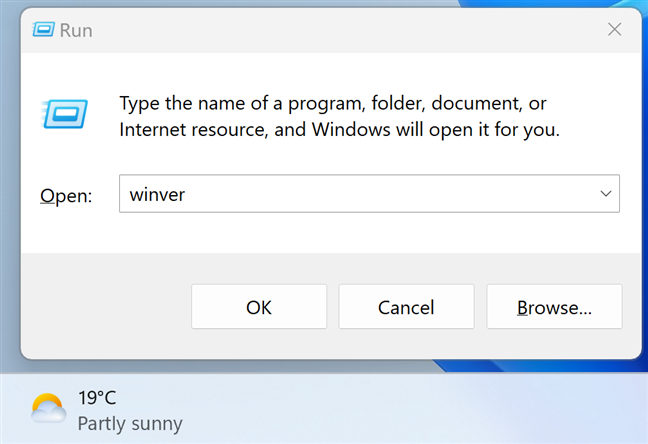 Type winver in the Run window and press Enter 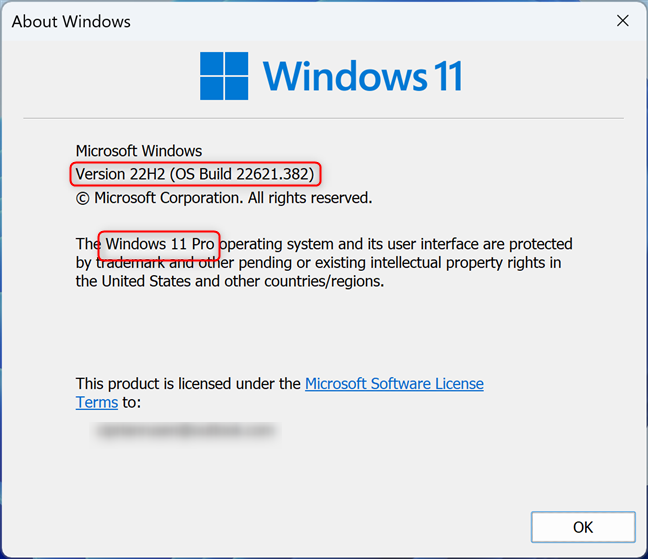 About Windows shows your Windows 11 version, build, and edition

I’ll explain what all these numbers and terms mean in the last sections of this article. Keep reading to find out what Windows 11 versions and editions there are and what the numbers next to OS build mean.

An alternative for getting the same information is offered by the Settings app. Start by opening Settings: a fast way to do that is to simultaneously press Windows + I on your keyboard. With System selected on the left sidebar, scroll down the right side of the window and click or tap About. 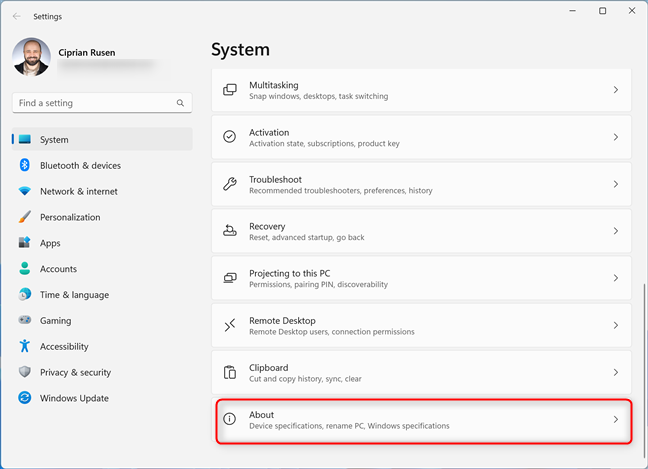 In Windows 11's Settings, go to System > About

This opens the About page for your computer. On it, you get details regarding your computer and operating system. The information we’re looking for is: 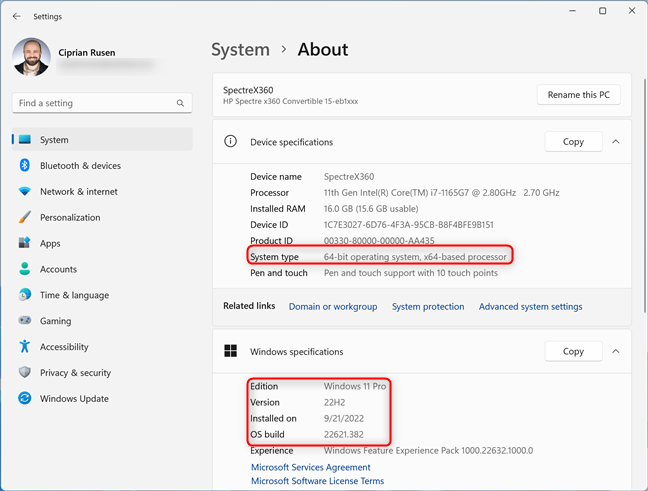 TIP: Notice your computer name on the top side of the About window. If you don’t like how it’s named, here’s how to change your PC name. 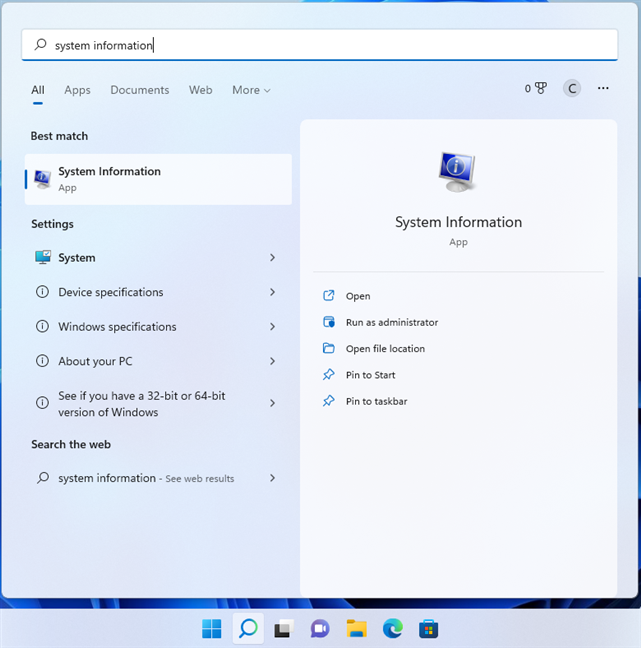 As soon as System Information opens, you see the OS Name and Version fields displayed front and center, letting you know which edition of Windows 11 you’re using, as well as its version number and build number. 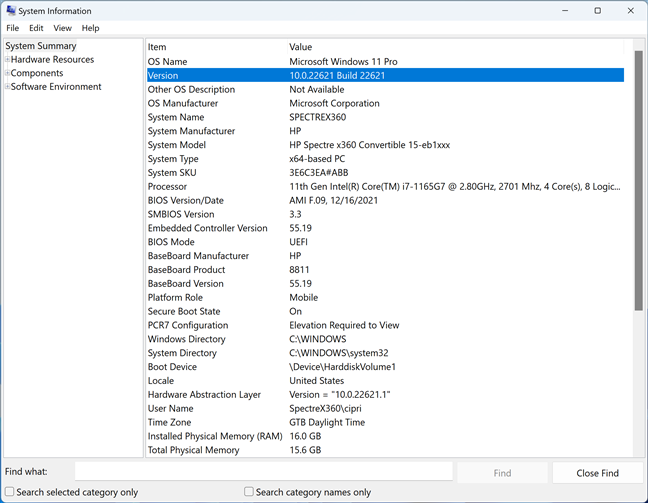 If you prefer using a command-line environment, open your favorite app:

In any of them, type or copy and paste this command:

Then, press the Enter key to execute it and see the information you need.

Notice how each field has its own column, presenting the information you’ve requested: BuildNumber, Caption (telling you the Windows 11 edition you’re using), and Version.

Alternatively, you can also use this command to get the same information:

This command returns the OS Name (the Windows 11 edition you’re using) and the OS Version, which shows you the Windows 11 version number and the Build.

A simpler command you can use, which reveals only the version number and build, is this:

As you might’ve noticed, the commands we’ve shared output information that looks a bit different from the one shown by winver or Settings. The commands list Windows 11’s Version as a series of numbers that also include the OS build. The same goes for the System Information app. In the earlier examples, the (build) numbers shown after 10.0 are 22621. This build number is the one that helps you make sense of the exact Windows 11 version you’re using, so continue reading.

What do Windows 11 version numbers mean?

Microsoft will keep updating Windows 11 and, theoretically, release one major update each year. Each update has a specific version number, and each one comes with new features, new apps, under-the-hood changes and improvements, and so on. For now, there are only two Windows 11 versions released to the general public:

Windows 11 editions: What’s different about them?

You can have one of the following editions of Windows 11 installed on your computer or device:

Besides the Windows 11 editions listed above, Microsoft might also sell other types of specialized editions, such as N and KN. These are editions of Windows 11 that don’t come with Windows Media Player, Media Player, and other multimedia features. N versions are sold in Europe, while KN versions are available in Korea. They exist only to comply with antitrust laws in these regions, where Microsoft has been found guilty of abusing its monopoly to hurt competing video and audio applications. N and KN can apply to various editions of Windows 11. For example, you can have Windows 11 Home N, Windows 11 Pro N, etc.

The system type only tells you that Windows 11 uses the 64-bit register of the processor. As Windows 11 only works on 64-bit processors, we find this information rather redundant.

What Windows 11 version and edition do you use?

Windows 11 doesn't require a product key to install and use

How to install Windows 11 on a virtual machine

How to dual boot Windows 10 and Windows 11