Notepad has always been one of the most useful apps in Windows, and that holds true in both Windows 10 and Windows 11. Whenever you need to write a few things, jot down some thoughts, or simply need to get help in Windows, Notepad is right there at your fingertips. But, before anything else, you should know how to open Notepad on your computer. So we thought it would be a good idea to tell you all the ways in which you can launch Notepad. Want to know them? Read on and you might be amazed by how many and how different they can be, from simple double-clicks to desktop and keyboard shortcuts, and even Windows commands for Notepad:

1. How to open Notepad using search

Regardless of whether you’re using Windows 11 or Windows 10, probably the fastest way to launch Notepad is by using search. In either operating system, press the Windows key on your keyboard, start typing notepad and, when Notepad shows up in the search results, press Enter or click/tap on it. 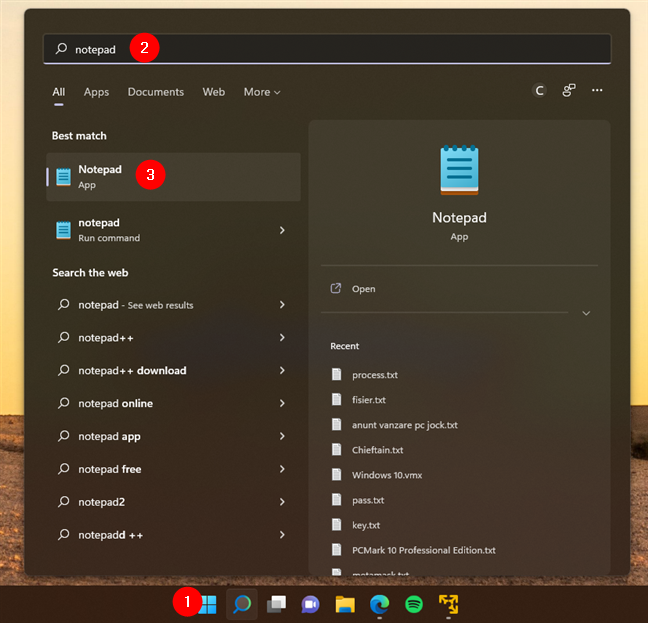 How to open Notepad on your PC fast 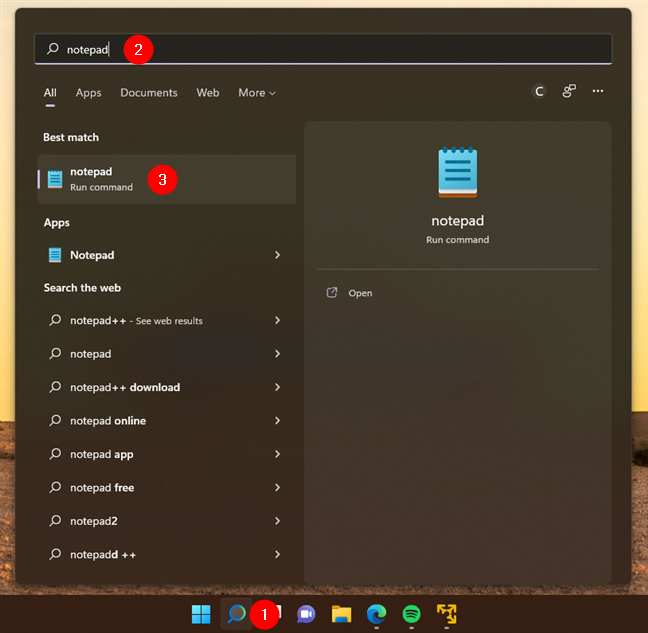 How to open Notepad using search

2. How to start Notepad by double-clicking on a text file

Notepad is the default app for opening text files in Windows. Text files are marked by the operating system with the “.txt” file extension. So, one of the easiest methods to launch Notepad on your computer is to simply double-click or double-tap on a text file.

You can do that anywhere a text file is found: on your desktop, in a folder, or on any drive. Obviously, in the latter cases, you’ll need to first use File Explorer to locate the text file that you want to edit with Notepad.

Open Notepad by double-clicking on a TXT file

3. How to open Notepad from the Start Menu

The Start Menu offers another easy way to open Notepad in Windows. If you’re using Windows 11, open the Start Menu and click or tap on the Notepad shortcut from the Pinned section. 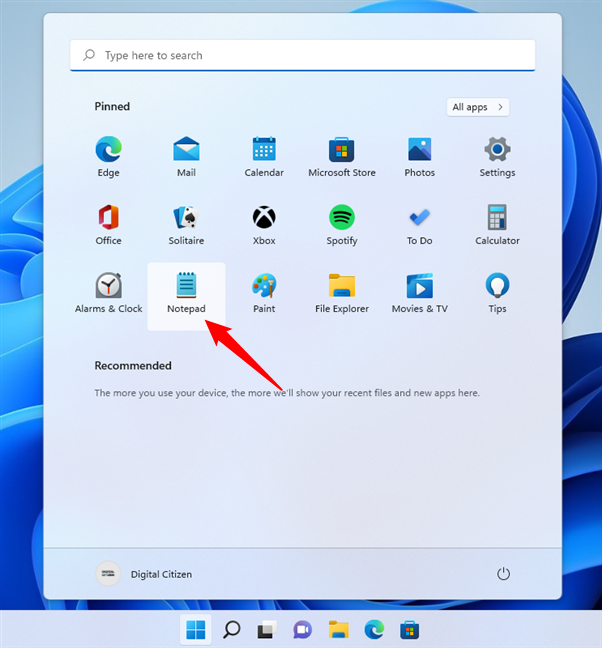 Alternatively, you can also open the All apps list and start scrolling through it. You’ll find a Notepad shortcut when you reach the letter N. 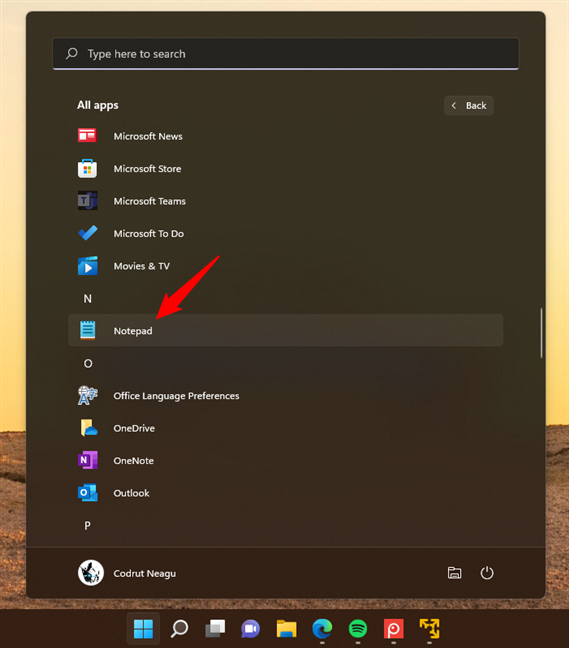 In Windows 10, the Start Menu doesn’t have a default tile for Notepad. Still, you can find its shortcut by scrolling through the list of apps. When you reach the folder called “Windows Accessories,” open it, and you’ll find a Notepad shortcut inside. 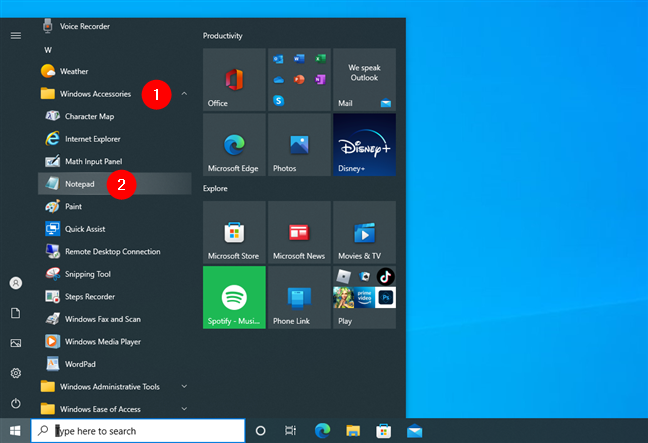 4. How to open Notepad quickly by pinning it to your taskbar or Start Menu

If you’re using Notepad often, you might want to pin its shortcut to the taskbar or, if it’s not already there, to your Start Menu. To do so, open the Start Menu, locate the Notepad shortcut in the apps list, and right-click or press-and-hold on it. In the context menu displayed, select “More” -> “Pin to taskbar” or “Pin to Start,” depending on where you want to pin Notepad. 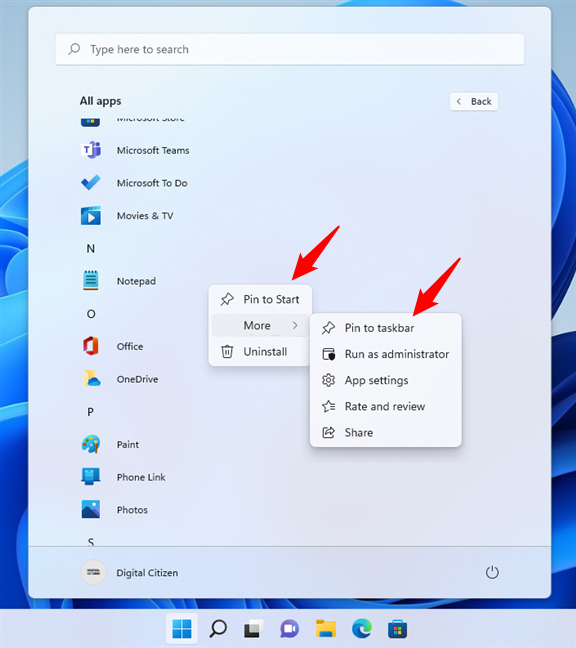 How to pin Notepad to the taskbar or Start Menu

Then, you’ll have Notepad close by on your taskbar or Start Menu, to easily open it anytime you need it.

Notepad shortcut on the taskbar

5. How to create a Notepad shortcut to open it from anywhere

You can always make a shortcut that opens Notepad. If you’re using Windows 11 or Windows 10, an easy way to do it is to drag and drop the Notepad shortcut from the Start Menu onto your desktop or in any other folder you prefer. 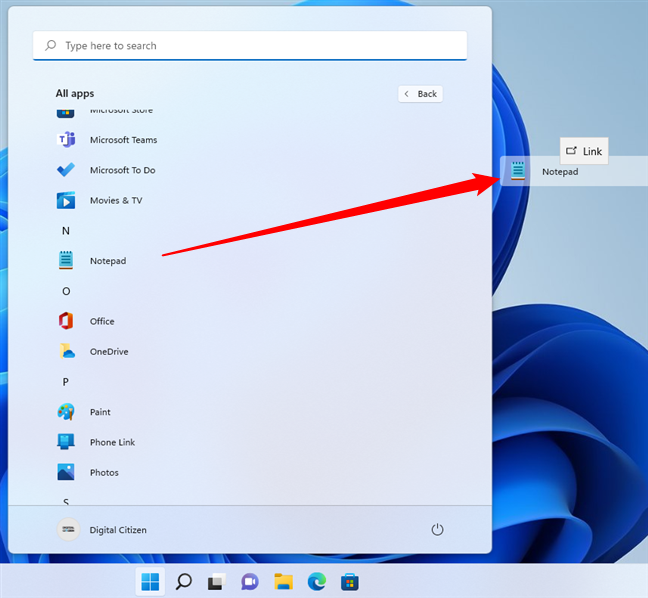 Creating a shortcut to Notepad on the desktop

Another one is to create a Notepad shortcut manually. Just make sure to enter notepad as the shortcut’s “[...] location of the item”. 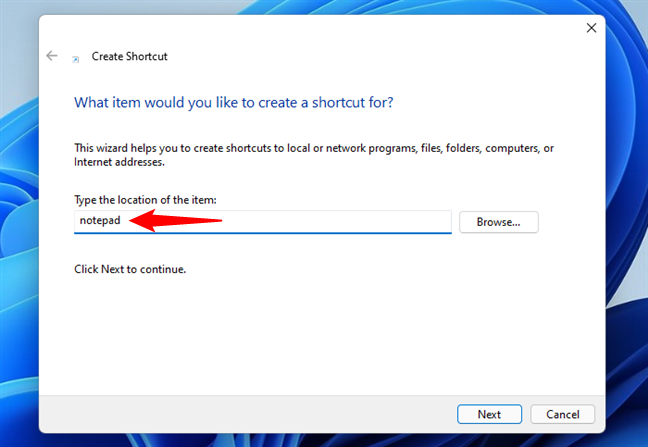 How to make a Notepad shortcut

NOTE: If you need help creating shortcuts, read How to create shortcuts for files, folders, apps, and web pages in Windows.

6. How to start Notepad with a keyboard shortcut 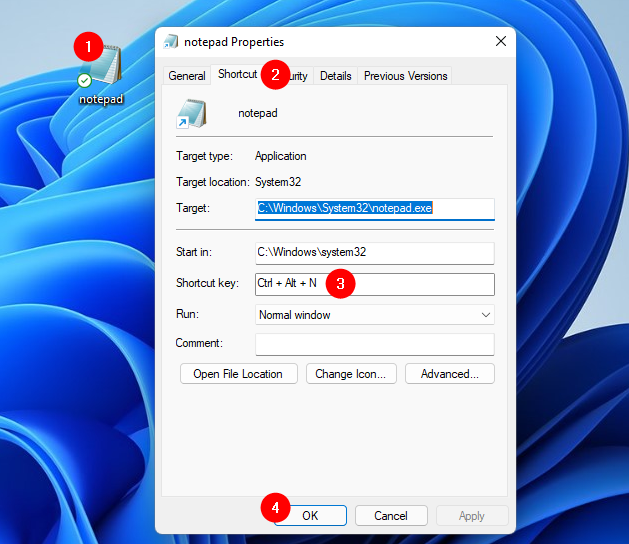 How to open Notepad with a keyboard shortcut

From now on, anytime I want to open Notepad on my computer, all I have to do is press Ctrl + Alt + N.

7. How to open Notepad from CMD using Terminal, Command Prompt, or PowerShell

Did you know that you can also open Notepad from CMD? Yes, there is a Windows command for Notepad. If you like working with Windows Terminal, Command Prompt, or PowerShell, type the command notepad in any of them and press Enter. 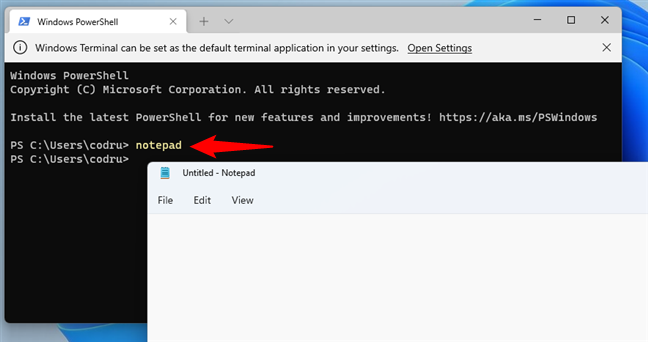 This immediately opens Notepad from CMD in Windows 11 and Windows 10. 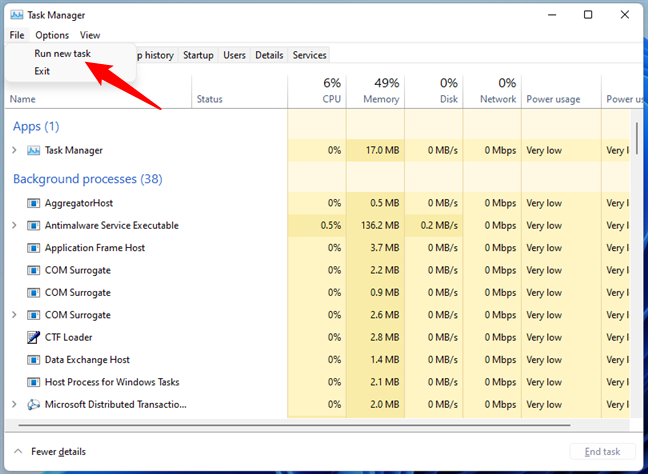 Type notepad in the “Create new task” window and then press Enter or OK.

Open Notepad from the Task Manager

9. How to start Notepad from the Run window

Another method we know for opening Notepad is to use the Run window. Launch Run (Win + R) and type notepad in its Open field. Then, press OK or Enter.

How to launch Notepad from Run

10. How to launch Notepad using Cortana

You can also ask Cortana to open Notepad. Open Cortana, type “open Notepad” in her dialog box, and press Enter. Alternatively, you can also press the microphone button and use your voice to say “Open Notepad!”. 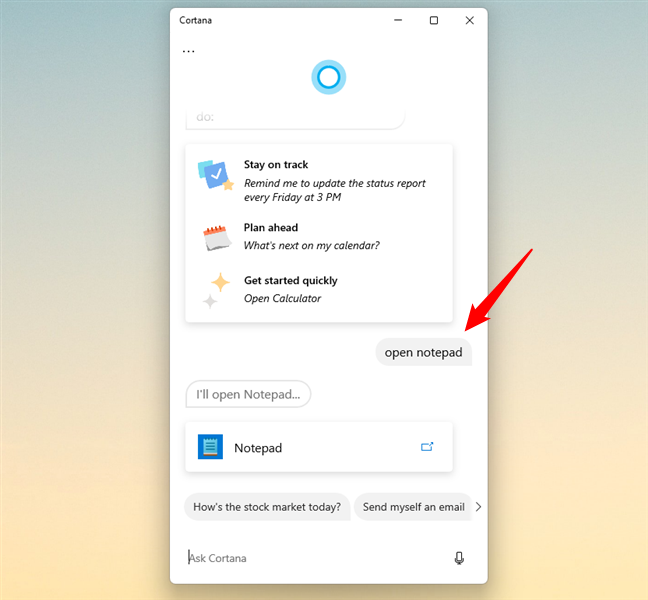 Cortana will then immediately open Notepad.

11. How to open Notepad in Windows by running notepad.exe

Both Windows 11 and Windows 10 store an executable file for Notepad in the default Windows folder. This means that you can use File Explorer to navigate to your Windows folder and double-click on the notepad.exe file to open Notepad. 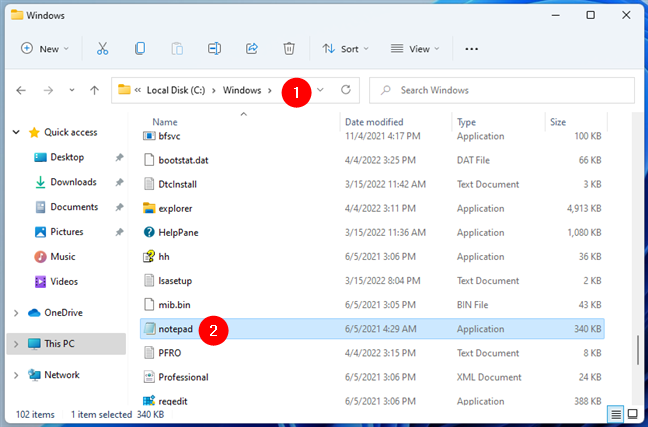 How do you open Notepad?

These are all the methods we know for starting Notepad in Windows. What’s your favorite? Do you know how any other way to open Notepad on a Windows laptop, tablet, or desktop computer? If you do, don’t hesitate to share your methods in the comments section below, and we will update this article as soon as possible.

9 ways to start Paint in Windows

How to open WordPad in Windows (9 ways)

10 ways to start Sticky Notes in Windows (all versions)

How to use Notepad in Windows 11