Back in 2019, Sony WH-1000XM3 was one of our favorite noise-canceling headsets. In the meantime, Sony WH-1000XM4 were launched. The new model promises to be even better than their previous iteration, offering best-in-class noise canceling, as well as superb high-quality audio, all in a single package. After testing and using the Sony WH-1000XM4 for about two weeks, here's what we found and what we like about them:

Sony WH-1000XM4 are excellent headphones if you want:

The main pros of buying the Sony WH-1000XM4 wireless headphones are:

On the not-so-positive side of things: 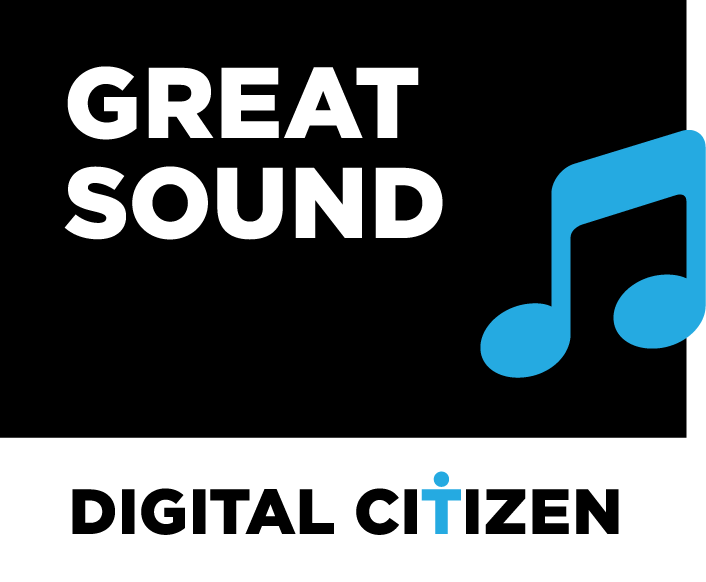 Sony WH-1000XM4 are probably the best noise-canceling Bluetooth headphones you can get today, offering top-notch audio quality in all usage scenarios. Although the design is almost identical to the previous generation Sony-WH1000XM3, that's not a bad thing, as it already proved to be very comfortable and robust. If you have the money Sony asks for these premium headphones, we say they're a great buy that will definitely make you happy.

The Sony WH-1000XM4 wireless headset arrives in a beautiful box. On the front, you can see what the headset looks like from aside, among other information, such as the model name and its main features. 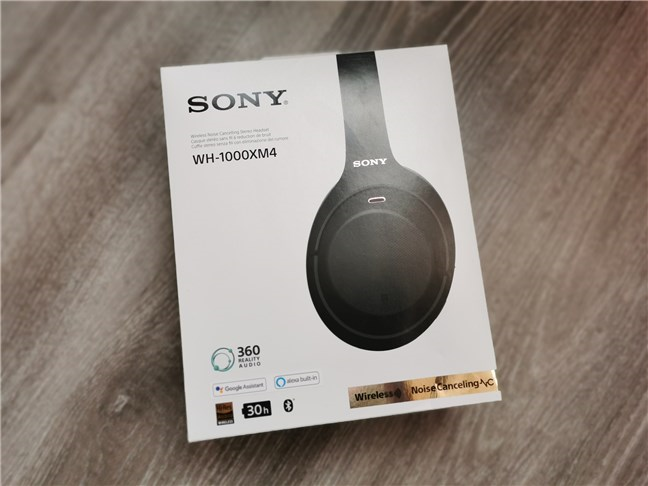 The packaging used for Sony WH-1000XM4

On the back of the box, you get to see other photos of the headphones and also additional information about the Sony WH-1000XM4. This is also the place from where you can quickly install the Sony Headphones Connect app on your smartphone using the printed QR code. 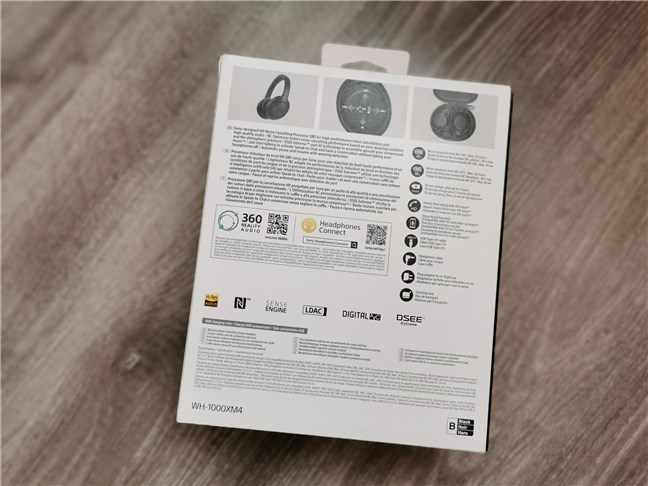 Opening the box reveals a tough carrying case and a series of papers (warranty, quick setup guide, some promotional papers). Inside the case, you find the headphones, a cable, a USB cable with Type-A to Type-C connectors, and an airplane adapter plug. 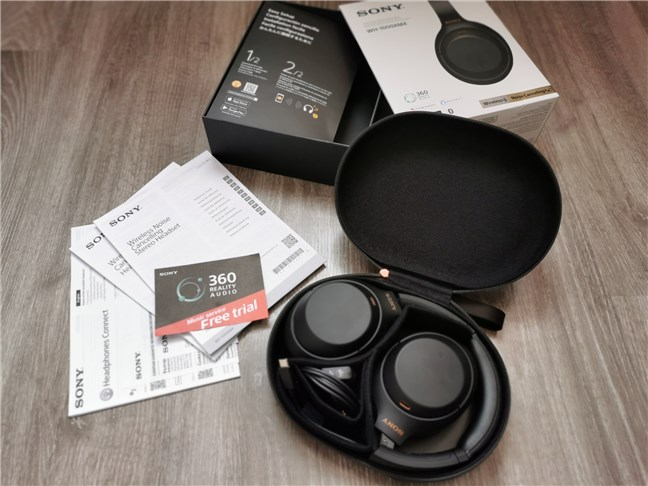 The contents of the Sony WH-1000XM4 package

Unboxing the Sony WH-1000XM4 is pleasant and the box includes plenty of accessories that most people will appreciate.

The Sony WH-1000XM4 is a beautiful pair of headphones. Their ear cups are large and, just like the previous generation Sony WH-1000XM3, use sizable 1.57-inch dome driver units based on neodymium magnets. The response in frequency falls within the 4 to 40,000 Hz range when using a wired connection, on a 44.1 kHz sampling rate. On Bluetooth, the frequency range narrows to 20 – 20,000 Hz, an LDAC 96 kHz sampling rate (990 kbps).

The wireless range of the Sony WH-1000XM4 is approximately 30 feet or 10 meters, which is standard for most Bluetooth devices. 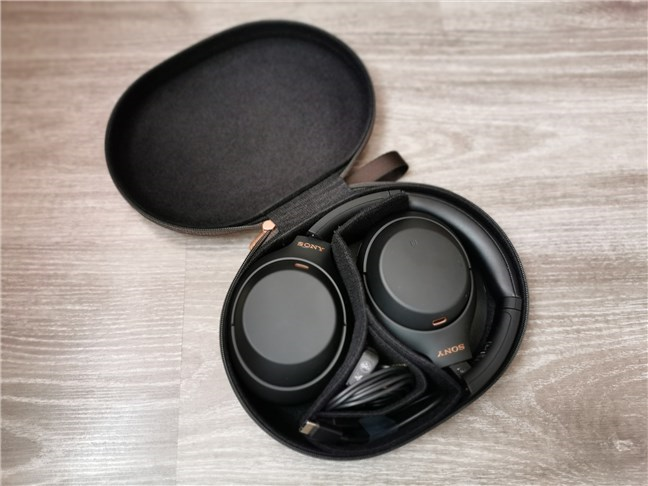 You can also use the Sony WH-1000XM4 with a 3.5mm audio cable. The one you get in the box looks premium, having gold-plated connectors, and is fairly long at 1.2 meters (3.94 feet). Unfortunately, the cable is wrapped in a plastic coating, not in a textile coating that would have made it more robust. As you can see in the picture below, you also get an airplane adapter and a short USB cable for charging the headphones. 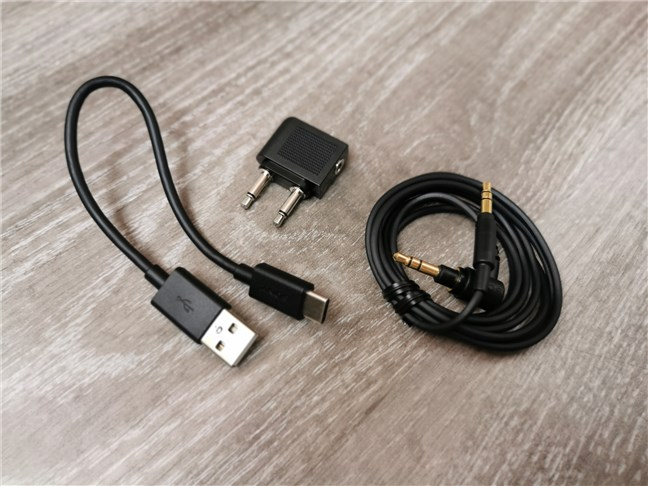 The cables and plugs you get

The Sony WH-1000XM4 headphones are generally made of plastic, although the headband is metallic. The ear cups and the headband are all covered by synthetic leather and soft plush inside. 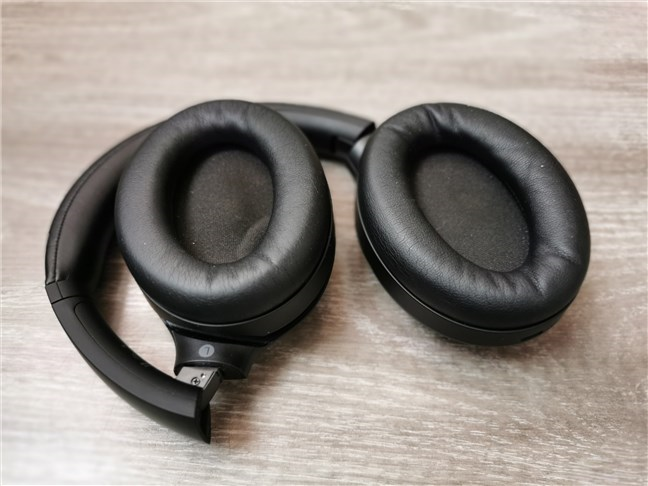 The ear cups on the Sony WH-1000XM4 wireless headset

On the right cup of the Sony WH-1000XM4 headphones, there's a tactile surface with controls. Tapping or sliding your finger on it can do things like adjusting the volume, taking phone calls, or skipping songs. Also, this is where the USB Type-C port is found.

On the left ear cup, there's the 3.5 mm audio jack, as well as the Power and Custom buttons. The Custom button works by default as a switch between noise canceling and ambient sound. However, using the Sony Headphones Connect app, you can assign other actions for the Custom button, like enabling Google Assistant. 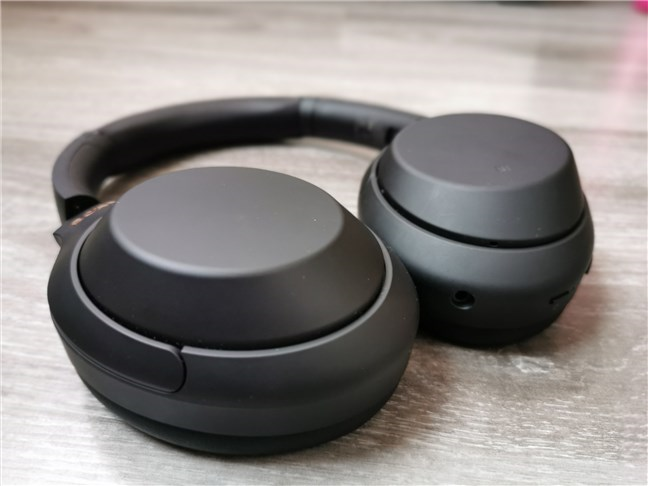 The battery life is 30 hours with noise cancellation turned on and up to 38 hours with it turned off. Charging takes approximately 3 hours.

Regarding style, the Sony WH-1000XM4 headphones are available in two color variants: black and silver. We tested the black version. 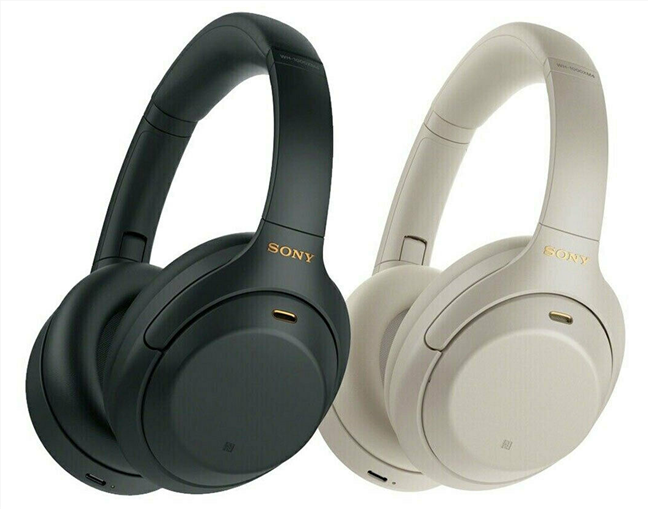 Sony WH-1000XM4 has a beautiful design and we appreciate that. However, they look almost the same as the previous version of the headset: the WH-1000XM3. The only obvious change is that the secondary physical button is called Custom now instead of NC/Ambient. The other change we noticed is that the new WH-1000XM4 no longer supports aptX HD and aptX, which the previous model did. Otherwise, the technical specifications are top-notch and the audio quality should be first-class.

Just like in our previous experiences with the Sony WH-1000XM3 and XM2, the Sony WH-1000XM4 headphones are very comfortable. As both the ear cups and the headband are protected by soft plush, and because the ear cups are large, even if you use them for extended periods of time, they don't make your head or ears hurt, sweat, or otherwise make you uncomfortable. The only people who might get slightly bothered by the faux leather are bald people or those who live in very hot environments, who might start to sweat after a while. 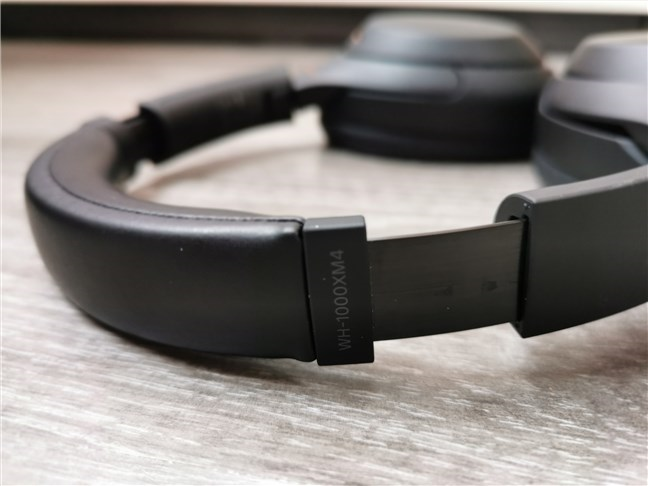 The headband of the Sony WH-1000XM4 wireless headset

Because they are both foldable and can swivel, these headphones are also great for traveling. They don't take as much space as headphones that can't fold, and the bundled case also helps with packaging them in your luggage.

Speaking about touch controls, they're as good as it gets. They're both easy to use and remember, and the headphones are quite responsive. 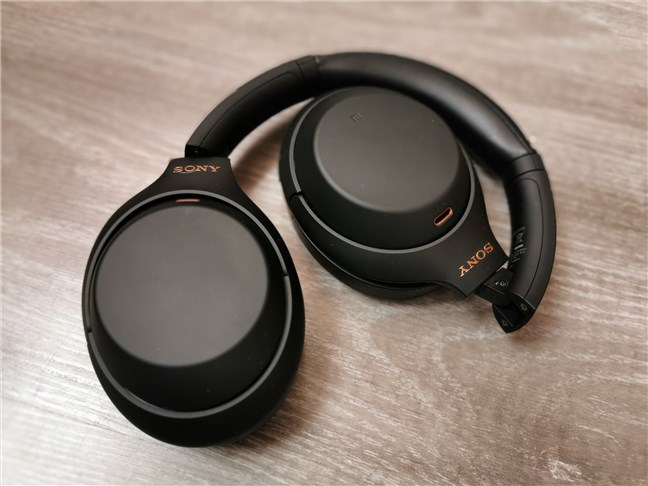 The ear cups on the Sony WH-1000XM4 wireless headset

Noise-canceling works just like you would expect it to. It's probably the best implementation of such a feature that we've ever seen, making us award the Sony WH-1000XM4 with the title of the best noise-canceling headphones in the retail "non-professional" world.

We used the Sony WH-1000XM4 outdoors and indoors, in noisy environments. We've had them cancel noises in a city with heavy traffic, as well as in a room where we had a small family party going on, with very loud music and people talking loudly. Putting the headphones on meant that we could still hear some ambient sounds, but it was so far away and that it appeared as "Elvis has left the building". ?

Music listening is also a first-grade experience, with high audio quality and excellent sound balancing. The low frequencies (bass) are powerful, mids are not overrepresented and highs are clear and precise. There's nothing to complain about when it comes to the audio quality. 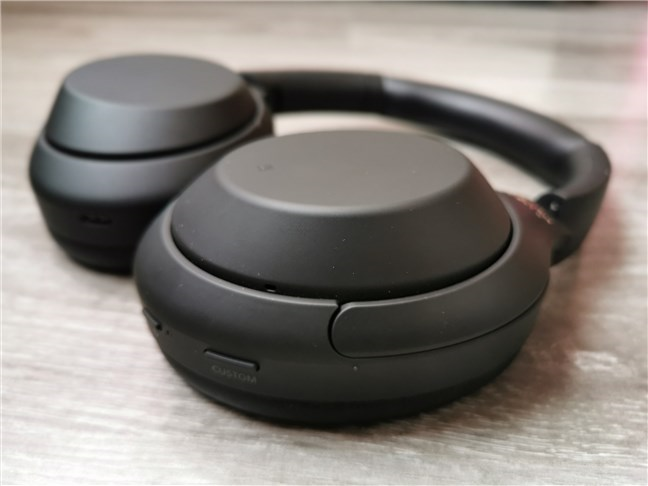 The physical buttons on the Sony WH-1000XM4

In phone calls, the Sony WH-1000XM4 does an excellent job also. The microphone is great and picks up your voice very well, making it clear, while removing most of the noise around you, so that the other party of the phone call can understand what you're saying without asking you to repeat it.

The Sony Headphones Connect mobile app for Android and iOS is required if you want to control and adjust how the Sony WH-1000XM4 works. It's the only means of doing that and, unfortunately, it's not available on Windows or macOS. On your mobile phone, you can use it to customize things like adaptive sound control, sound equalizer, sound quality mode, DSEE Extreme, and so on. It's also the app that you need if you want to optimize the noise-canceling feature of the headphones. 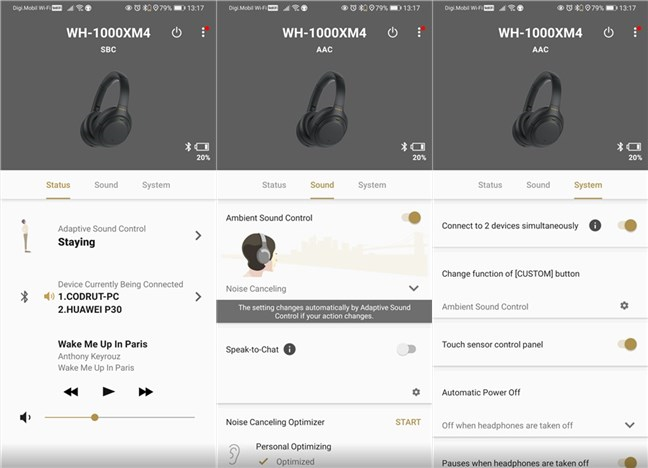 Sony WH-1000XM4 is the new ruler of noise-canceling headphones in the retail audio market. The audio quality you get from it is top-notch, and both the comfort level and the features offered are first-class.

What's your opinion about the Sony WH-1000XM4 headset?

Just like the previous WH-1000XM3 and WH-1000XM2, the Sony WH-1000XM4 impressed us. We like them a lot, and we warmly recommend them to anyone who can afford them. Do you like them too, and would you buy a pair? Let us know what you think in the comments section below.