This graphics card is a good choice for:

Here are the key positive aspects you should know about this graphics card:

As for its downsides, keep in mind:

The Sapphire Nitro+ AMD Radeon RX 6750 XT is a premium implementation of an otherwise mid-range GPU that brings relatively little improvement over its predecessor, the AMD Radeon RX 6700 XT. The Radeon RX 6750 XT brings just a small increase in boost clock but delivers additional performance by using faster memory. Offering excellent frame rates in both 1440p and 1080p gaming, Sapphire’s implementation also benefits from an oversized cooling solution that makes it extremely quiet in all situations. Taking all of the above into account, as well as the increase in price, I’d say that the Sapphire Nitro+ AMD Radeon RX 6750 XT is a good choice for gamers who want a good mid-range graphics card, but not for those who already have an AMD Radeon RX 6700 XT or an Nvidia Geforce RTX 3070.

The Sapphire Nitro+ AMD Radeon RX 6750 XT arrives in a huge box, so you can guess right from the start that the card itself is oversized. The package is colorful and full of details about the graphics card. 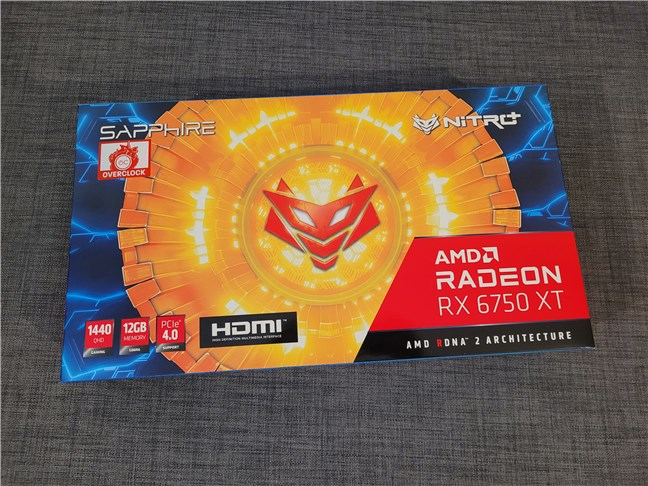 The box of the Sapphire Nitro+ AMD Radeon RX 6750 XT 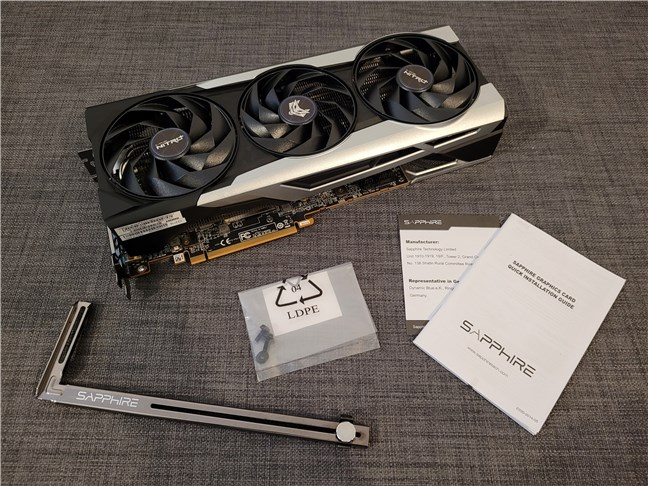 What's inside the box

Unboxing the Sapphire Nitro+ AMD Radeon RX 6750 XT is a pleasant experience. Although it uses a mid-range GPU, the card is equipped with an oversized cooling solution, which means it should deliver every inch of performance it’s capable of, while still being quiet. I also appreciate the inclusion of a bracket support considering that the size of the card also means significant weight. 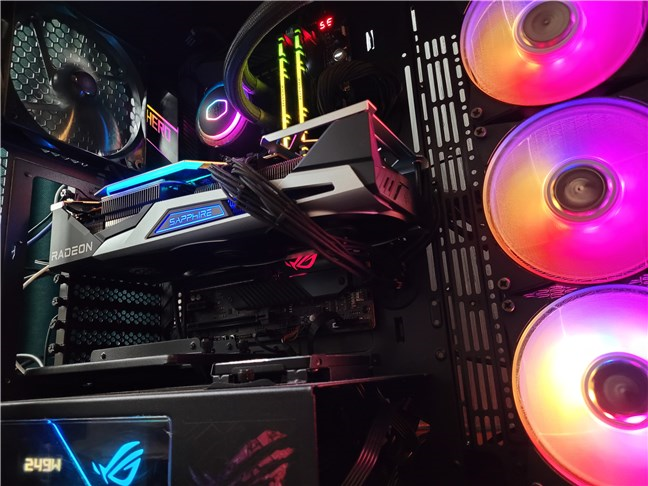 Obviously, that also means that video cards based on this GPU will require a bit more power too: 20 Watts more, to be precise. Furthermore, AMD also increased the price from about 479 USD for the RX 6700 XT to 549 USD for RX 6750 XT. So, what we get, in theory, is a slightly faster GPU for some additional cash.

Moving on, the Sapphire Nitro+ AMD Radeon RX 6750 XT that I’m reviewing today is definitely an imposing card. Just look at it: 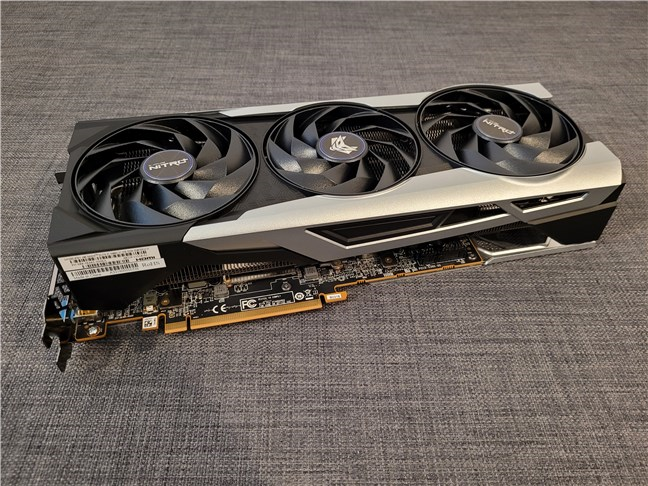 The card looks like a monster and feels like one too. 🙂 The cooling solution chosen by Sapphire is massive: three fans on top of a really thick heatsink, five copper heat pipes, and a metal backplate on the other side. Measuring 31 by 13.08 centimeters (12.2 by 15.5 inches) in length and width, and 6.22 centimeters (2.45 inches) in thickness, this graphics card is so big that it will occupy three PCIe slots on your motherboard. 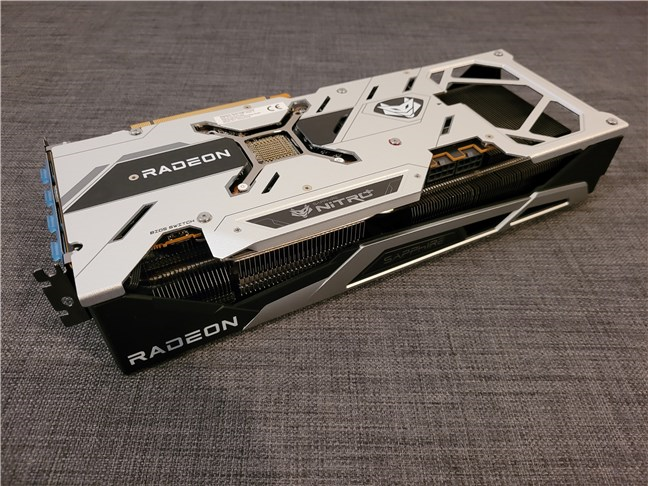 I find the massive cooler to be overkill for the RX 6750 XT GPU used by the card. Nonetheless, besides looking great, it’s certainly helpful in terms of heat dissipation and quietness. Sapphire’s card is only whispering even in the most demanding situations. 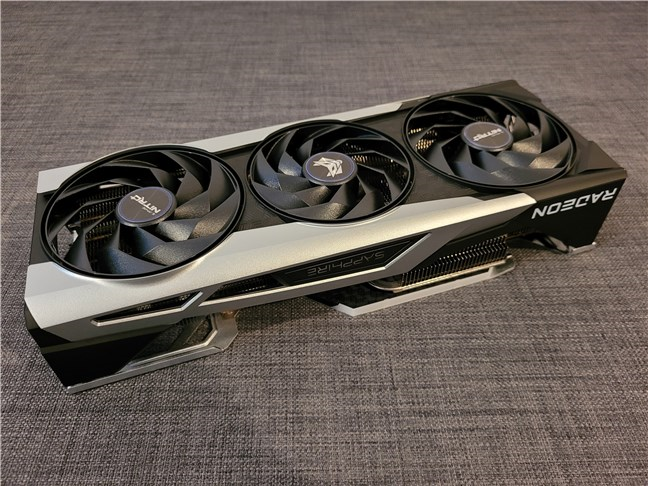 The backplate on the Sapphire Nitro+ AMD Radeon RX 6750 XT looks great too, and besides protecting the circuits, it also keeps the card from bending. Furthermore, you can also take advantage of the bundled bracket support to further sustain the card inside your PC. 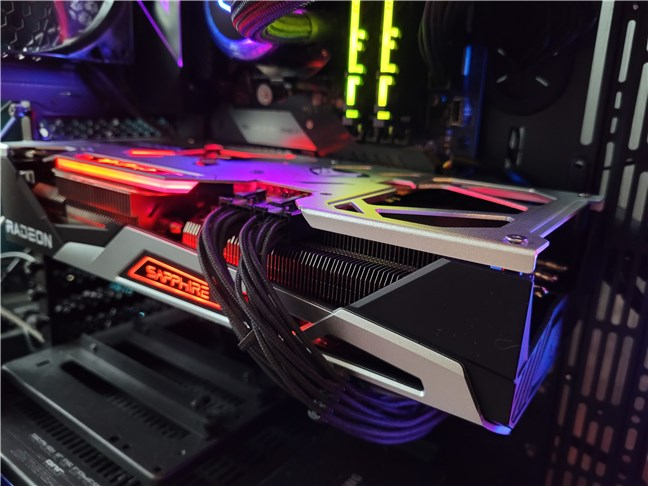 Sapphire’s RX 6750 XT graphics card comes with 12 GB of GDDR6, 2560 stream processors, 40 ray accelerators, and 96 MB of Infinity Cache. Running on PCI Express 4.0 x16 and designed for gaming in resolutions of up to 1440p, the card has three DisplayPort(s) and one HDMI port. 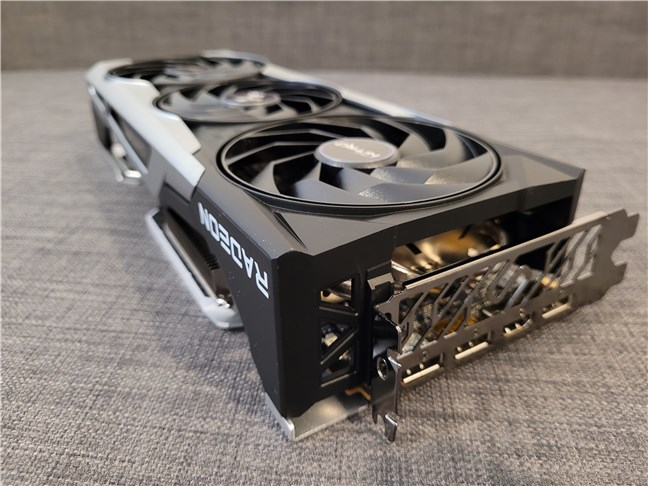 Three DisplayPort and one HDMI are available 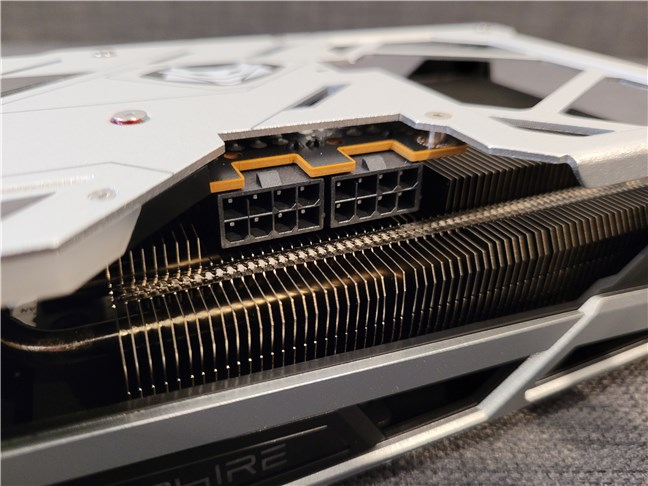 Performance in games and benchmarks

To see what the AMD Radeon RX 5700 XT graphics card can do in real life, I benchmarked it using several games and apps, comparing its results to those I got from a next-tier AMD Radeon RX 6800. The computer used for testing had the following configuration: 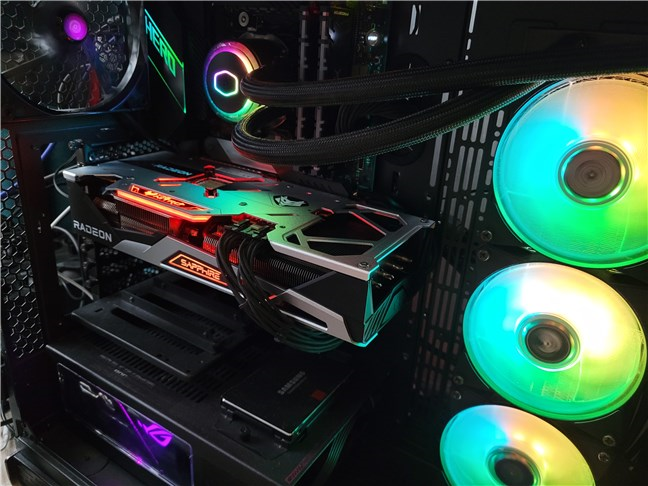 The gaming PC used for benchmarks

I benchmarked all the games using the high or ultra graphics settings presets, depending on which preset was the most demanding.

Shadow of the Tomb Raider is a game with visuals that are still impressive to this day, but all that beauty has its price. Obviously, it requires a powerful graphics card to run at maxed settings. I measured an average of 174 fps in 1080p and an average fps of 117 in 1440p. While the Radeon RX 6770 XT is a bit slower than the AMD Radeon RX 6800 XT, the number of frames per second is top-notch, above 100 fps, in both cases. 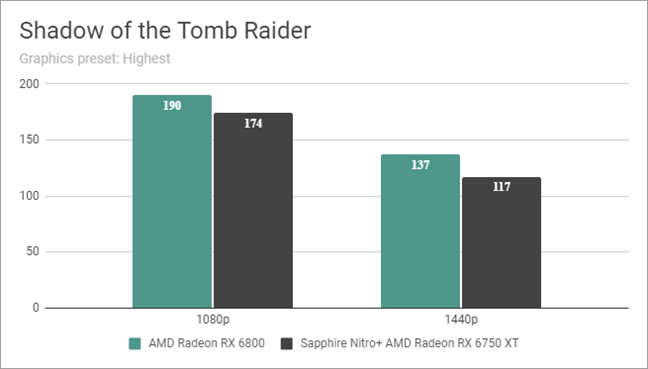 Benchmark results in Shadow of the Tomb Raider

Metro Exodus, released back in 2019, is still one of the most demanding PC games, especially if you want to play it with the best graphics. The Radeon RX 6750 XT delivered excellent frame rates in both 1080p and 1440p resolutions. The average framerate I measured was higher than 60 fps in both cases. 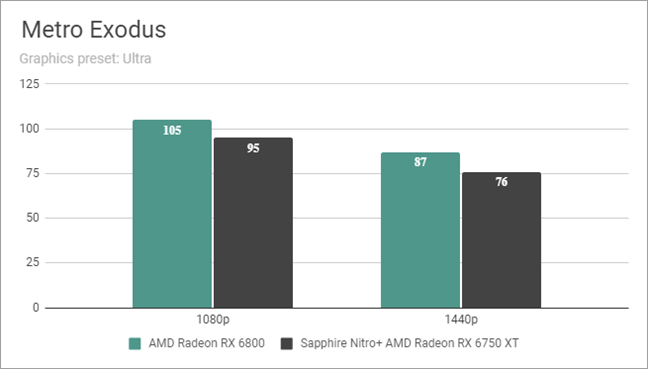 I’ve also benchmarked Horizon Zero Dawn, a game that impressed me with its environment, characters, and “robotic” fauna from the first time I saw it. Although it’s quite a demanding game in terms of graphics performance, the Radeon RX 6750 had no issues rendering over 100 frames per second in both 1080p and 1440p resolutions. 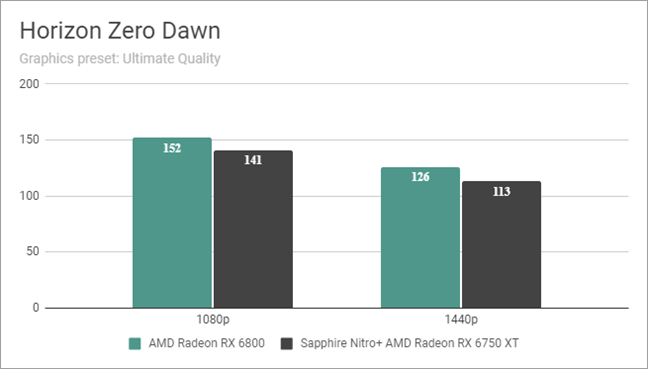 Next on my list was CyberPunk 2077. While it had its fair share of glitches and bugs at launch, most issues have been resolved today, and the game is exquisite. With the Sapphire Nitro+ AMD Radeon RX 6750 XT, on ultra settings but without ray tracing, I got an average of 99 fps in 1080p and precisely 60 fps in 1440p. That’s great, considering how demanding this game is. 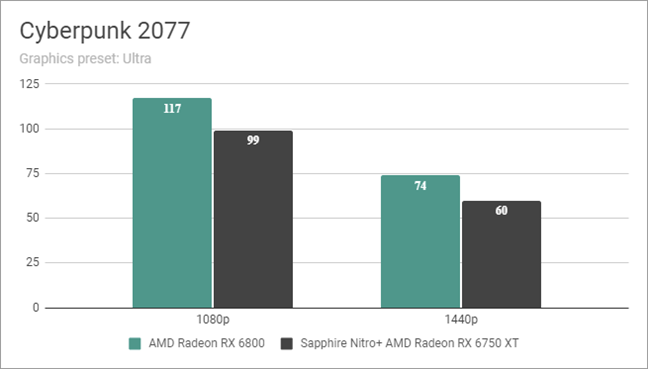 The last game I tested was Assassin’s Creed Valhalla. Sapphire’s Radeon RX 6750 XT graphics card performed excellently. I got over 100 fps in 1080p and 90 fps in 1440p, which is quite an outstanding result. Furthermore, in 1080p, it rendered almost the same number of fps as the Radeon RX 6800. 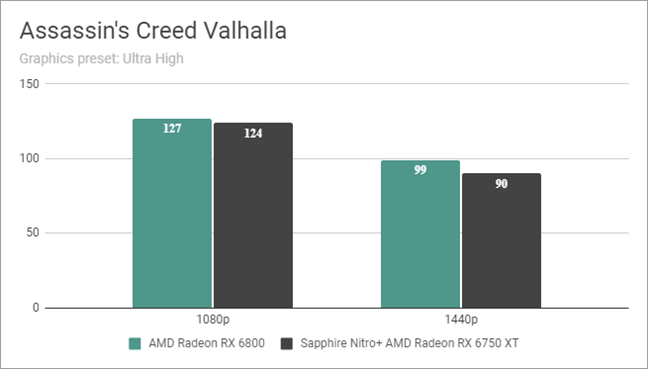 Once I finished checking games, I moved on to benchmarking Sapphire’s Nitro+ AMD Radeon RX 6750 XT with 3DMark. The card got an excellent score of 13602 points in the regular Time Spy test. However, the 40 ray accelerators on the RX 6750 XT are too few to get good ray tracing performance or a good score in 3DMark’s Port Royal benchmark. It only managed 6280 points. And, if you look at the next chart, you’ll see that the AMD Radeon RX 6800 is quite significantly more powerful. 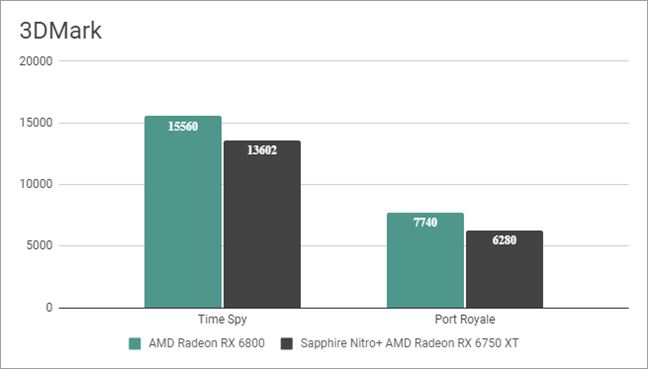 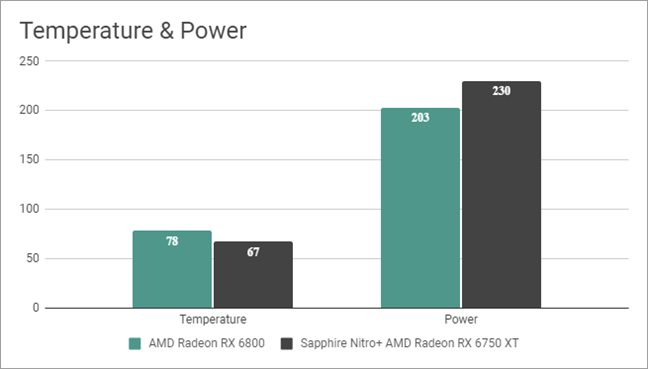 The Sapphire Nitro+ AMD Radeon RX 6750 XT shapes up as an excellent mid-range graphics card. Unless you want ray tracing, the performance it offers for gaming in 1080p and 1440p resolutions is great. Although its price tag and power requirements are a bit higher than that of the Radeon RX 6700 XT, so is its performance.

What is your opinion about the Sapphire Nitro+ AMD Radeon RX 6750 XT?

Now you know what the Sapphire Nitro+ AMD Radeon RX 6750 XT can do and my opinion about it. How about you? Do you like this graphics card? Would you buy it, or would you choose a similar card from the competition? Let me know in the comments section below.