2022 has been a bit of a strange year for the processors market. While Intel regained the performance crown with its new and excellent Alder Lake family of processors, AMD released additional models of their Ryzen 5000 processors. Some are faster than their previous iterations, while some are more affordable in terms of price. One of the CPUs that falls in the latter category is the AMD Ryzen 5 5600, a much better-priced version of the 5600X but with slightly lower clocks. I’ve tested and benchmarked it, and in this review, I’ll tell you more about what to expect from it. Interested? Here’s what the Ryzen 5 5600 is good at:

This processor is probably the best choice if:

There are many good things to say about the AMD Ryzen 5 5600:

Right now, I don’t think there are any meaningful downsides to the AMD Ryzen 5 5600. 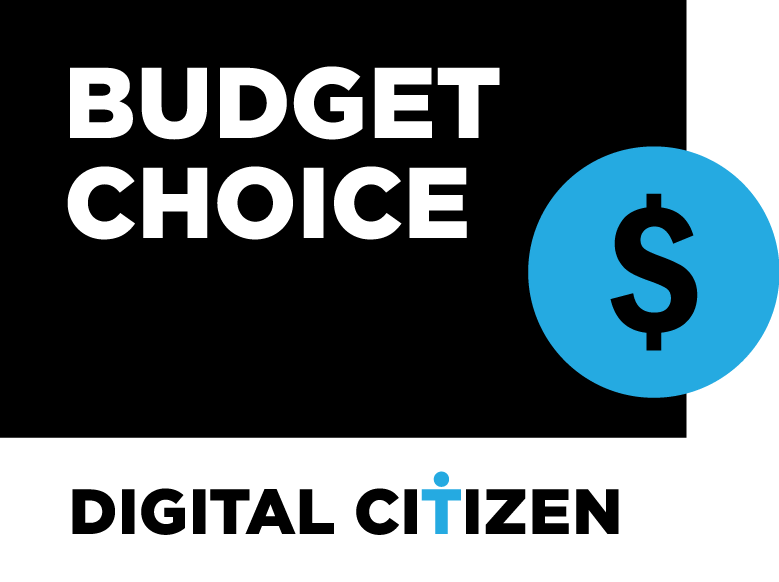 The AMD Ryzen 5 5600 is one of the best affordable mid-range desktop processors you can get today. For about 200 dollars, it delivers a lot of performance in productivity workloads, as well as in gaming. Although the Zen 3 platform is aging, and we’re expecting completely new AMD processors to launch by the end of the year, the Ryzen 5 5600 CPU is still a great choice for PC users in 2022. Especially if you don’t want to spend a fortune, but you do require above-average performance from your computer. In my opinion, AMD Ryzen 5 5600 is a “best buy” option for budget-conscious users.

AMD’s Ryzen 5 5600 comes in an average-sized box made of cardboard. On the front, you can see the company’s logo and the fact that this is a Ryzen 5000 series processor. 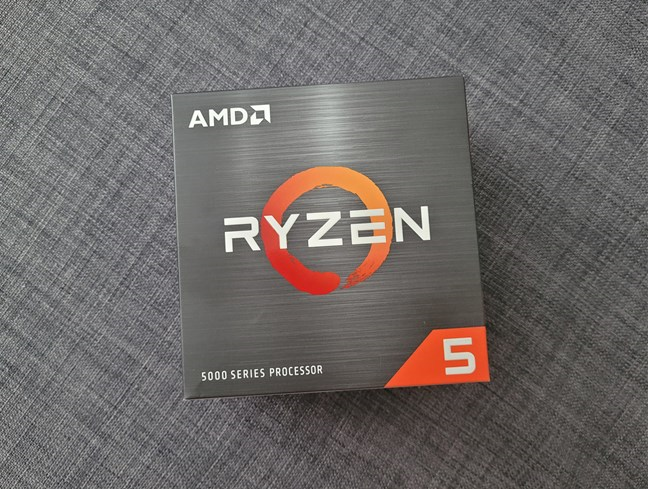 You can also get a quick look at the processor through a cutout on the side of the box. And, on the back of the box, you’ll find some information about it. 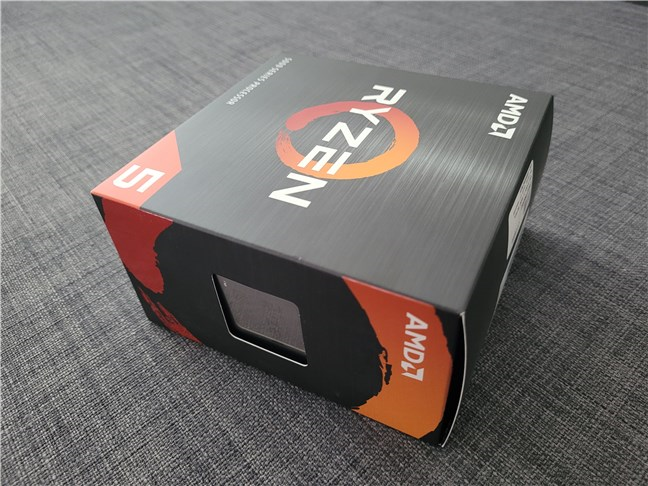 Open the box, and you’ll find the AMD Ryzen 5 5600 processor, a Wraith Stealth cooler, a small AMD Ryzen sticker, and some documentation. 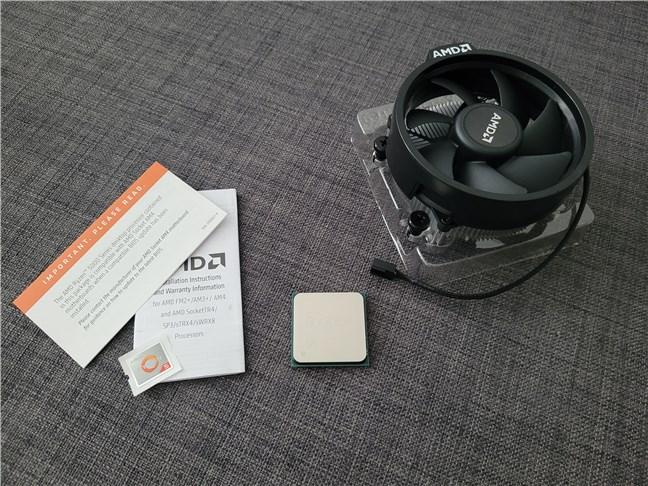 The AMD Ryzen 5 5600 processor arrives in a standard box that looks nice. It’s worth noting that it also bundles a cooler, so you can start using the processor right away without having to spend more money on a custom cooling solution.

The Ryzen 5 5600 is a mid-range processor from AMD that’s almost identical to the 5600X one that I reviewed back in 2020 when it was launched. Just like the Ryzen 5 5600X, the 5600 CPU is built on the Zen 3 architecture (7nm manufacturing process) and features six cores and twelve threads. However, there’s a key difference between the two models: slightly slower clocks for the Ryzen 5 5600. 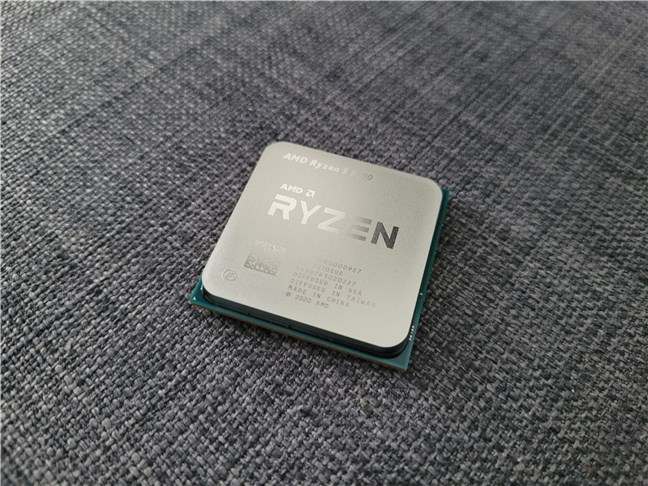 The AMD Ryzen 5 5600 has a base clock of 3.5 GHz and can reach a maximum boost speed of 4.4 GHz. In comparison, the 5600X runs at a base frequency of 3.7 GHz and a boost clock of 4.6 GHz. This small difference makes the Ryzen 5 5600 more accessible in terms of price, but it’s quite insignificant when it comes to real-world use scenarios. Sure, you might get a frame or two more with the 5600X in your favorite game, and maybe in some benchmarks, but that’s pretty much it. So it might very well be a better choice for budget-conscious users, considering that its manufacturer's recommended price is $199, making it $100 cheaper than the 5600X. 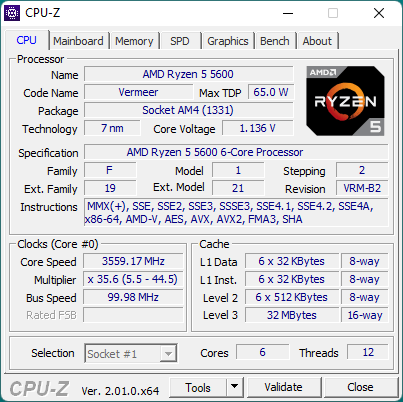 Other than that, everything looks identical: for instance, the Ryzen 5 5600 benefits from 32 MB of Level 3 cache memory, just like the 5600X. The AMD Ryzen 5 5600 works on Socket AM4 and can be mounted on most AMD 400 and 500 series chipsets. In terms of memory support, the AMD Ryzen 5 5600 can use DDR4 in dual-channel, at a maximum speed of 3200 MHz. There’s also support for PCI Express 4.0, which means you can use fast solid-state drives. 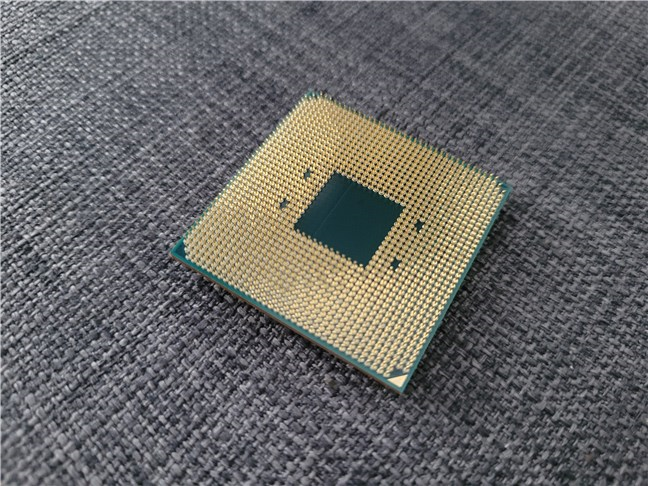 Last but not least, the processor’s TDP is 65 Watts and the Ryzen 5 5600 also comes with a cooler in its box, an AMD Wraith Stealth. As you’ll later see in this review, it does an excellent job of keeping the temperature low. Taking into account all that, it’s pretty clear that this processor can be an excellent choice for people who want to build a budget-friendly, fast, and energy-efficient computer.

If you’d like to browse through all the technical specs of this processor, here’s its official page: AMD Ryzen 5 5600 Specifications.

The AMD Ryzen 5 5600 looks like an excellent mid-range processor. Its technical specifications are good, and its price is even better. But how does it fare in real life? Let’s see what benchmarks tell us about it:

I tested the AMD Ryzen 5 5600 processor on a PC with the following hardware and software:

To get a better image of the performance offered by the AMD Ryzen 5 5600, I compared it with the high-end AMD Ryzen 9 5900X (up to 4.80 GHz, 12 cores, 24 threads). I used the same test computer with the same hardware components for both processors. 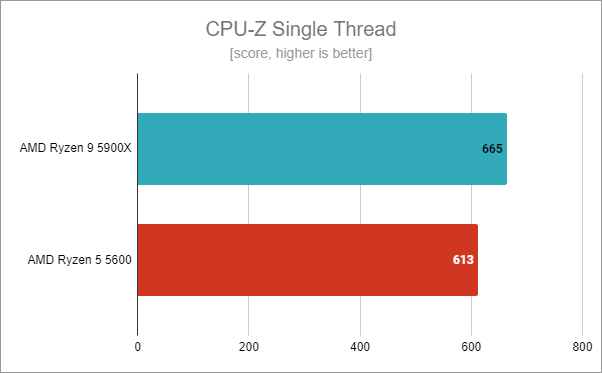 In CPU-Z's Multi-Thread benchmark, however, the fewer number of cores/threads shows. The Ryzen 5 5600 is half as powerful as the Ryzen 9 5900X. 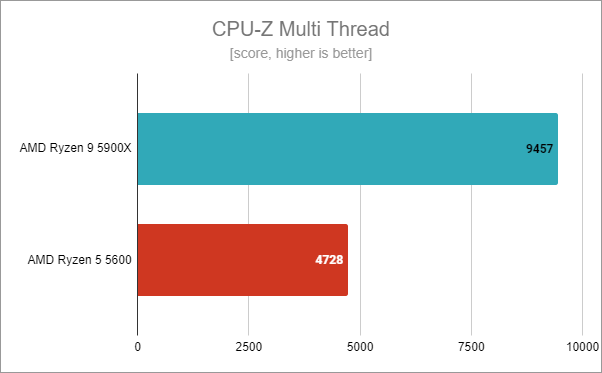 In Cinebench R23, a rendering benchmark, the AMD Ryzen 5 5600 got an all-core score of 10132 points. Again, the higher core number of the 5900X shows its power. The 5600 processor got a good score but clearly not one that would recommend it to users who want to run rendering jobs quickly. 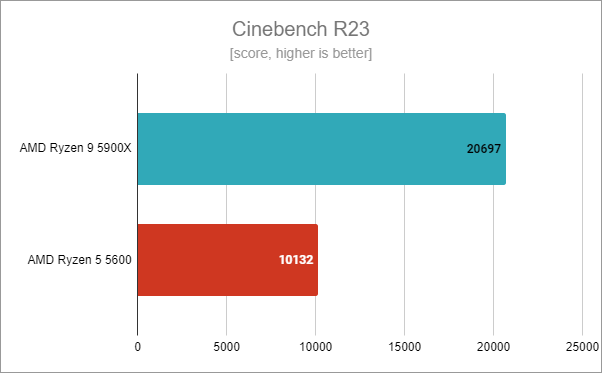 In Blender, another popular rendering benchmark, the same story: AMD Ryzen 5 5600 got a score of 158 points, which is half of what you get from the high-end 5900X. 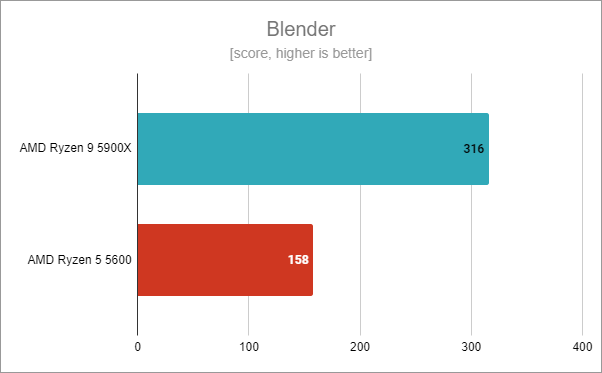 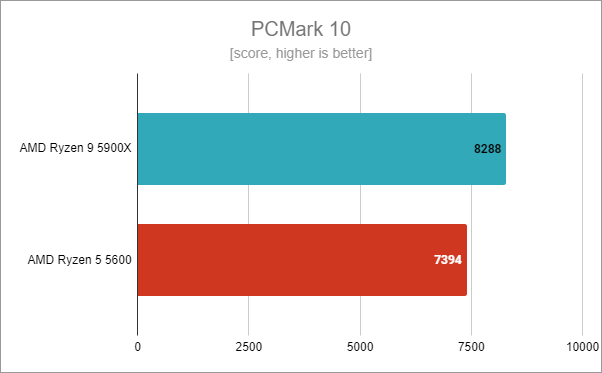 Next, I ran JetStream 2, a benchmark that tests web browsing. The AMD Ryzen 5 5600 proved to be a very capable processor here, only a couple of percent slower than the Ryzen 5 5900X. 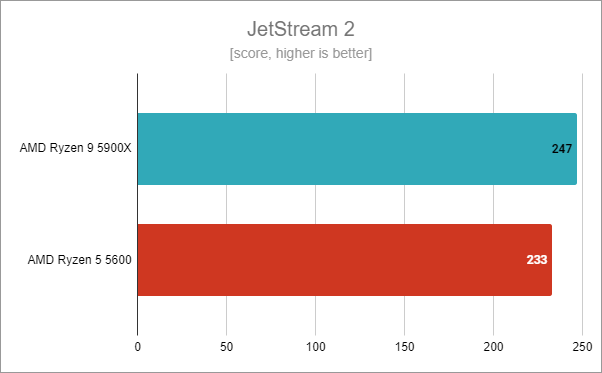 In 7-Zip, the AMD Ryzen 5 5600 managed to achieve a compression rate of 56 MB/s. Considering its technical specifications, it’s an excellent result, about 27% slower than the 5900X. 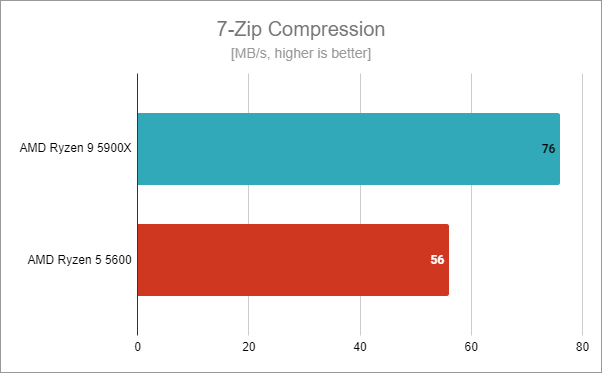 The decompression speed was not extraordinary but still good. According to 7-Zip’s benchmark tool, the Ryzen 5 5600 is about half as fast as the Ryzen 9 5900X. 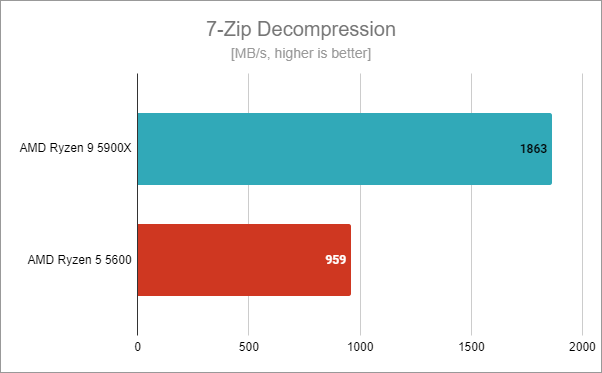 Next, I moved on to gaming. First, I ran the 3DMark CPU Profile, which benchmarks the all-core gaming performance of the processor. The AMD Ryzen 5 5600 managed a score of 5575 points. It’s a good result considering the number of physical cores found on this CPU. 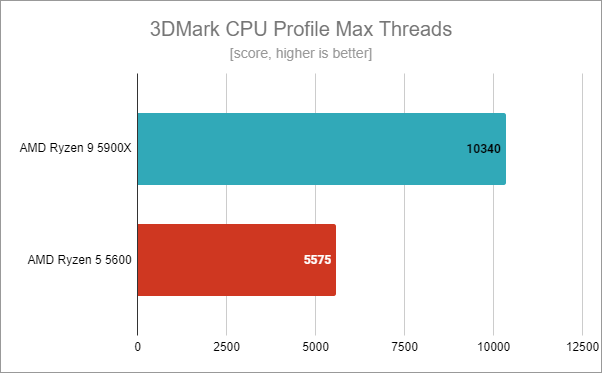 NOTE: For the next gaming benchmarks, I used the 1080p resolution and the lowest visual quality settings, trying to eliminate the GPU bottleneck. The graphics card I used - AMD Radeon RX 5700 - is quite old and not that good a choice for gaming these days. Unfortunately, this was the only one I had available when writing this review. 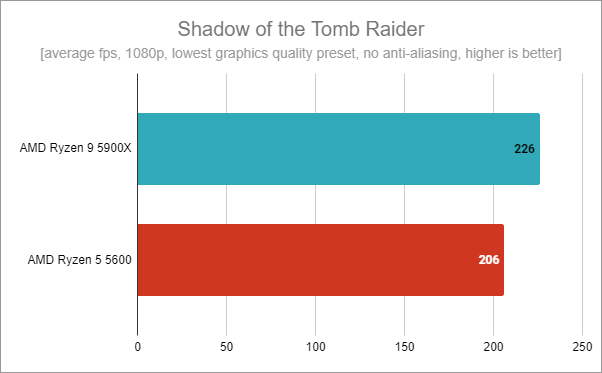 AMD Ryzen 5 5600: Benchmark results in Shadow of the Tomb Raider

In Metro Exodus, a very demanding game in terms of hardware, the graphics card was a bottleneck for both processors. With either of them, I got the same number of frames per second: 221. 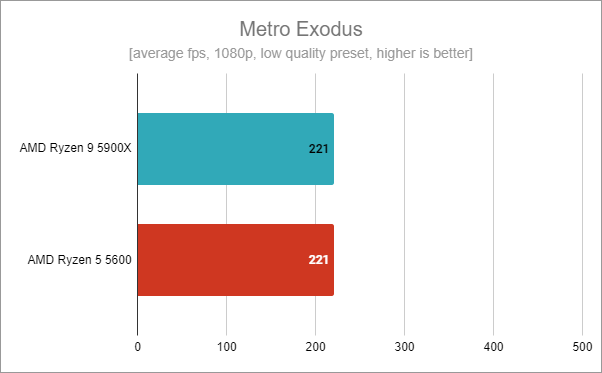 In Assassin's Creed Valhalla, I got the same number of frames per second with both the AMD Ryzen 9 5900X and the AMD Ryzen 5 5600. The graphics card was probably again a bottleneck for both processors here. However, it also shows that the Ryzen 5 5600 is a capable gaming CPU. 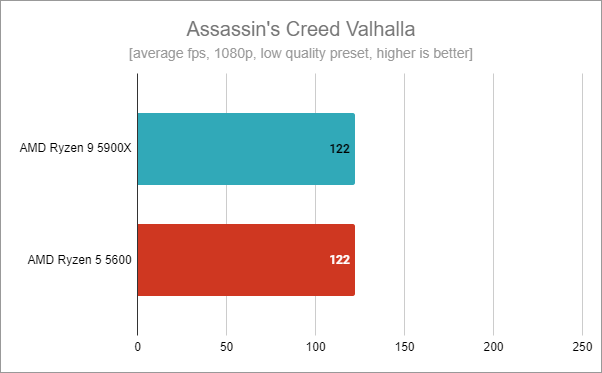 What about heat? As you know, the AMD Ryzen 5 5600 has a TDP of only 65 Watts, and the company also bundles a cooler with it. Using it, I ran a stability test with AIDA64. The good news is that the maximum temperature reached by the processor was not high: 79 degrees Celsius (~ 174 degrees Fahrenheit). In other words, you can safely rely on the bundled cooler, saving the extra money otherwise spent on custom cooling solutions. The Ryzen 5 5600 doesn’t need that. 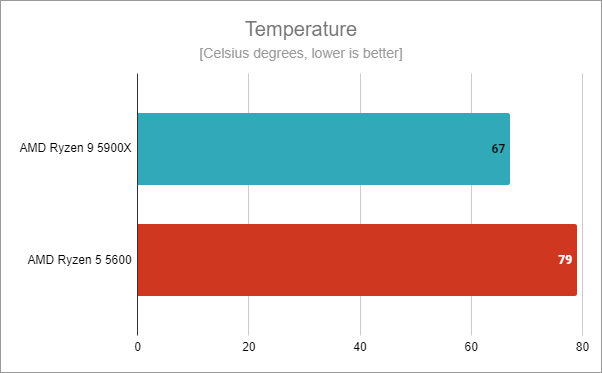 Last but not least, I checked how much electrical power the AMD Ryzen 5 5600 draws. Good news again: it won’t make you wonder why your electricity bills are going up. The Ryzen 5 5600 only needs about 78 Watts at most! 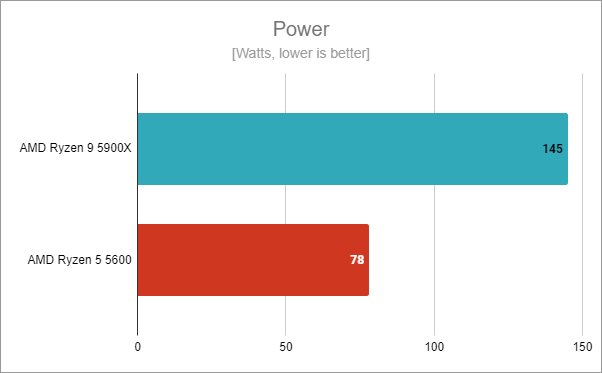 The benchmarks results tell quite a clear story. The AMD Ryzen 5 5600 is an excellent mid-range desktop processor that handles all everyday tasks and even games very well. For an affordable price, it delivers enough performance to please many users.

Now you know more about the AMD Ryzen 5 5600 processor and what it can do. So, after learning about its strengths and weaknesses, are you considering buying one? Do you have something else in mind? Let me know what you think in the comments section below.