In this day and age, you can find many apps that promise to help you recover deleted files. It is great to have lots of options, but the question is, which programs are good at recovering deleted files? Which of them deliver on their promise? To find out, we tested some of the most popular applications in this niche, all of which are free for personal use. Let's see what we discovered:

NOTE: In this article, we test three truly free file recovery software: Recuva vs. PhotoRec vs. IObit Undelete. We also wanted to do a Recuva vs. EaseUS comparison, but, unfortunately, the latter is not a genuinely free app, as it only allows you to recover up to 2 GB of lost data.

How we tested the free file recovery software

We took a USB memory stick and formatted it to make sure there was nothing left on it. Then we copied a wide range of files on it: 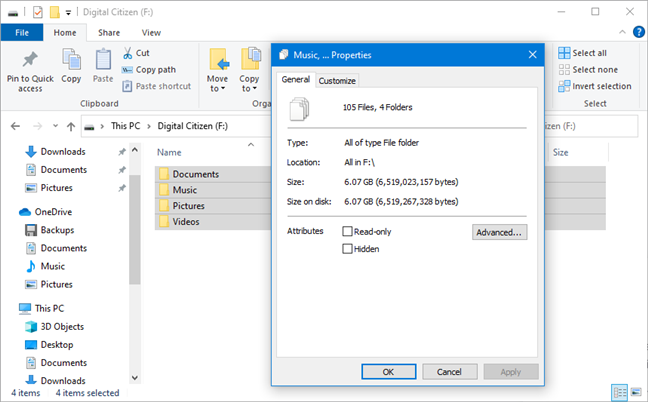 The files we used for testing recovery software

Next, we deleted all the files permanently, using the Shift + Delete keys, and added 20 new files (jpeg images, 57.40 MB total size) on the memory stick. We did that to see how good each program would be at recovering files when there are chances of having some deleted files partially overwritten by others. Since the deleted files were on a USB memory stick, we recovered the files to our computer's solid-state drive.

Then it was time to test the data recovery apps we planned to review. We chose the programs you see below because, at this moment, they are the most popular in the niche. We also wanted to restrict this review only to free apps, without any limitations, because most people are not keen on spending money on apps they might only use once or twice.

Recuva starts with a wizard, which helps you choose the location and file types you are about to scan. The application made the scan in 0.09 seconds and found 85 out of the 105 files we deleted. It recovered them in 5 minutes and 26 seconds, and all of the 85 recovered files were intact. Unfortunately, twenty out of the thirty .mp3 music files we had initially were unrecoverable. 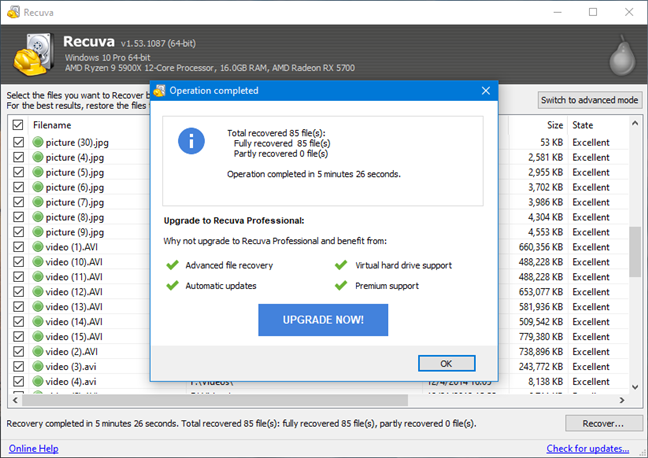 Running Recuva a second time, using the deep scan option gave better results. Although the deep scan itself took much longer (31 minutes and 3 seconds), Recuva identified 144 recoverable files. That’s more than the number of files we copied on the USB memory stick: Recuva managed to detect 59 additional image files that were found on the stick before formatting it. However, the twenty .mp3 files that it didn’t recover on the first (fast) scan were still undetected and unrecoverable. The recovery time was similar to the first one we recorded: 5 minutes and 24 seconds. 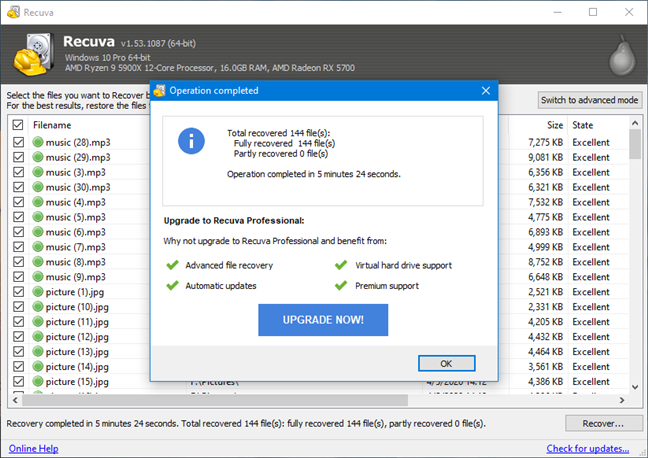 TestDisk PhotoRec is an excellent data recovery app. The software is open-source, meaning that it is entirely free for anyone to use. Inexperienced users might be tempted to dismiss it right from the start because it’s not advertised as having a graphical user interface. However, if you look closely inside the zip file you download, you’re going to find an app called qphotorec_win.exe, which is nothing else but the PhotoRec tool with a graphical interface. 🙂 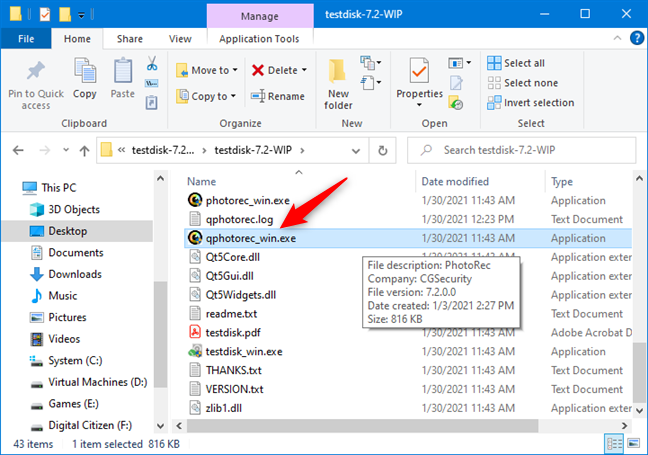 TestDisk PhotoRec has a tool with graphical interface

Looking at PhotoRec vs. Recuva, PhotoRec handles the lost files recovery process differently from Recuva or other similar software. After selecting the drive that you want to scan and the recovered files’ location, it immediately retrieves everything it can.

In our test, it found and rescued 85 files from the 105 deleted files. It managed to do it in 25 minutes and 56 seconds. That is quite a long time, and, unfortunately, this app doesn’t have a deep-scan feature like Recuva. 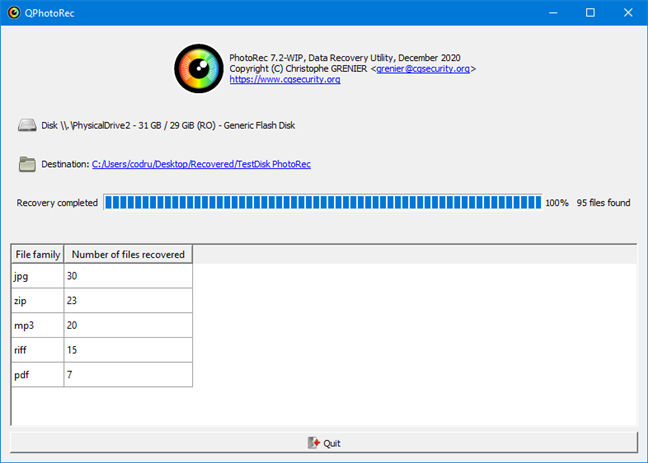 IObit Undelete offers an easy-to-use interface that also looks good. The file recovery process can be as simple as selecting what type of files you lost, choosing the drive on which they were found, and then starting the search. This app does not include many advanced settings, but that means you can jump right into getting your files back without having to read user manuals. 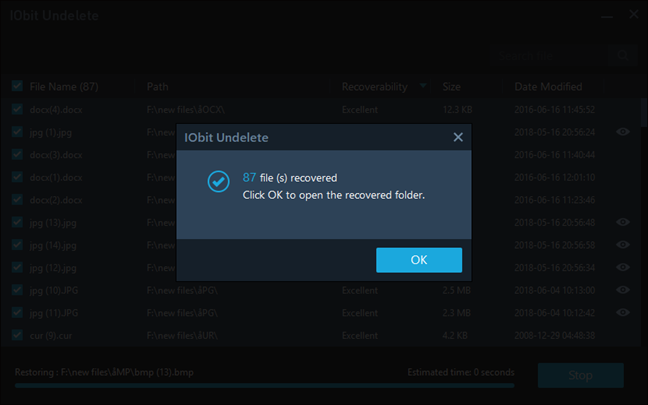 IObit Undelete recovered a total of 85 files out of the 105 files that we’ve deleted. The scan time was 14 seconds, while the total file recovery time was 5 minutes 18 seconds. Unfortunately, IObit Undelete doesn’t offer an in-depth scan feature similar to Recuva.

We created a table with a summary of our findings. Take a look to get a good overview:

Summing everything up, it is evident that the clear winner is Recuva. Looking at the number of deleted files that were recovered, both Recuva, TestDisk PhotoRec, and IObit Undelete managed to retrieve the same number of files. However, when running a deep scan, Recuva managed to recover even some files that were found on the USB memory stick before we formatted it. That’s a better result than what the other two apps managed.

We also noticed meaningful differences regarding the scanning speed and the time it took to recover the deleted files. From any perspective you look at, it seems that the contest of IObit Undelete vs. TestDisk vs. Recuva was won by the latter. Out of the apps we tested, none was better than Recuva.

Which is the best file recovery software in your opinion?

We hope this comparison has been useful to you in making an informed choice. If you have any questions, do not hesitate to leave a comment. Also, if you have used any of these file recovery apps, share your experience below. It will surely help others.

How to recover deleted files with Recuva (from SSD, HDD, USB stick, etc.)

Simple questions: What happens to deleted files? Why can you recover some of them?

2 ways to format an SD Card, a USB memory stick or a hard drive partition, in Windows