TP-Link recommends the mesh systems from their Deco family if you want a network with great coverage for a multi-story house, a large apartment, or your company’s office. We can place as many Deco stations as we need for our location, and they automatically work together to give us the easiest and most efficient Wi-Fi experience. TP-Link Deco systems connect to each other through a Wi-Fi backhaul and generally provide a good experience. But, if you have a space with many thick walls or a very large one, it may be a better idea to create an Ethernet Backhaul for your TP-Link Deco system. Here’s how to do that and what benefits to expect when it comes to your wireless network signal and speed:

What is a backhaul and how does it work for TP-Link Deco mesh systems?

A backhaul is a technical term used in telecommunications that means a connection or direct link between several elements of a whole. In our case, between the stations that make up a mesh Wi-Fi system. If you have a TP-Link Deco mesh Wi-Fi system consisting of two or more units, these are linked to each other automatically via Wi-Fi. If you open the Deco app, on the Network screen, you can see a map of your network and the Wi-Fi symbol displayed for the link between Deco stations. This means that your mesh system uses a Wi-Fi backhaul.

By default, TP-Link Deco systems use a Wi-Fi backhaul

If your TP-Link system is dual-band, then the faster 5 GHz band is used for the backhaul. This is also shared with devices on your network that can connect to it. If your TP-Link system is tri-band, the third band (which can be 5 GHz or 6 GHz, depending on your system) is used for backhaul. This band is reserved solely for the connection between Deco stations, as in the case of the TP-Link Deco XE75 system we recently tested. When you have a dedicated wireless backhaul, the TP-Link Deco mesh system offers better network transfer stability and usually higher transfer speeds. But the fastest and most stable backhaul is the Ethernet Backhaul, which is a connection created using a network cable between the TP-Link Deco stations. 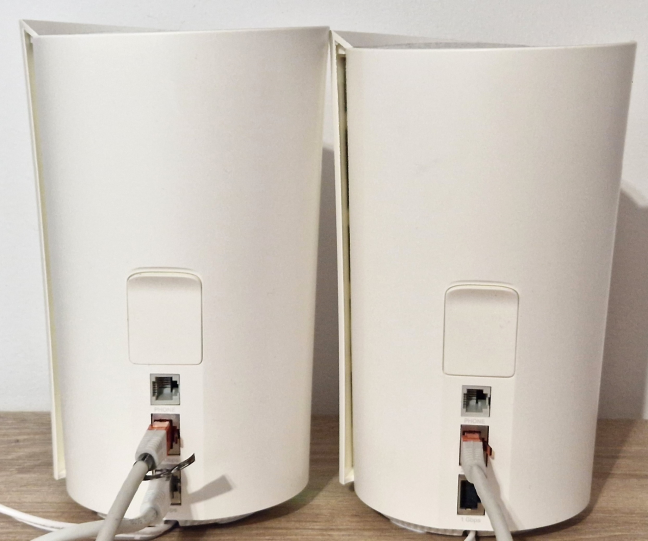 TP-Link Deco stations must first be set up via the Deco app to connect to each other wirelessly. Once configured and displayed in the Deco app, with the settings you want for your network, connect them together using the Ethernet cable. If you have three or more Deco stations, you can connect them to one another in a daisy chain. You can also have some Deco stations connected to one another via Ethernet cable and others via WiFi. In a few moments, you notice how the icon for the connection between stations changes from Wi-Fi to cable.

You can find technical details on creating an Ethernet Backhaul, including examples on structuring your network, on the official TP-Link website: General questions about Ethernet Backhaul feature on your Deco.

I had available two TP-Link Deco X80-5G stations, which I placed in my apartment according to the diagram below. I positioned the main Deco unit in the largest room, where I write content for Digital Citizen.

My apartment is a bit small to fully test such a powerful mesh Wi-Fi system, and I placed the second station in Room 1 to provide better Wi-Fi in Room 2, where most routers struggle. A TP-Link Deco X80-5G system made of two stations, connected through an Ethernet Backhaul, should cope with a four-room apartment or a medium-sized, single-story house.

The apartment where I tested the TP-Link Deco X80-5G

Having said that, I was still able to perform measurements showing the benefits of an Ethernet Backhaul for TP-Link Deco systems.

The benefits of an Ethernet Backhaul on the 2.4 GHz band

Traditionally, the 2.4 GHz band provides a rather large coverage area, but the offered speeds are not exactly amazing. I first measured the signal strength of the 2.4 GHz band on the Wi-Fi 6 standard when using just one Deco X80-5G unit. You can observe the strong wireless signal in the room where this station is located and in Room 1, separated from the station room by a wall, but it’s not so great in Room 2, separated by two walls, where many routers tend to struggle. When using two Deco X80-5G units connected through an Ethernet Backhaul, the signal was great in all rooms. And the difference in Room 2 was significant, about 34%. 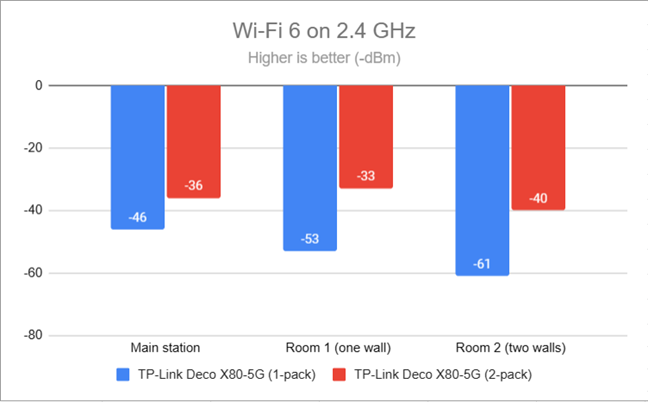 Wireless signal evolution on the 2.4 GHz band via Wi-Fi 6

I then used the SpeedTest app to measure the speed of the internet connection in each room several times. I worked out the averages of these measurements and presented them in the graph below. There is a significant speed improvement when using two TP-Link Deco X80-5G stations connected via an Ethernet Backhaul, versus a single station. The download speed was better, with percentages ranging from 14% to 63%. 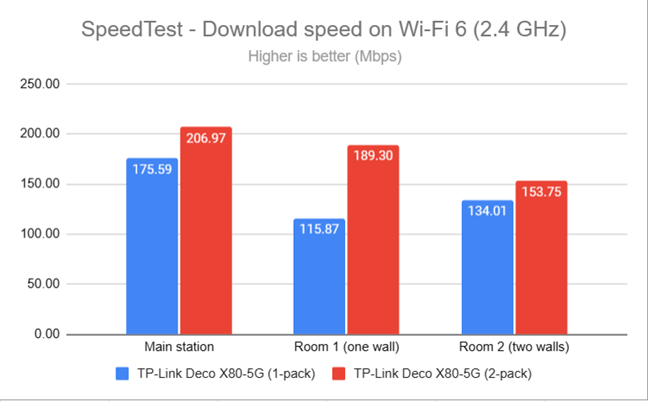 The upload speed was also significantly better, especially in the rooms located far from the main station, reaching differences of up to 82%. 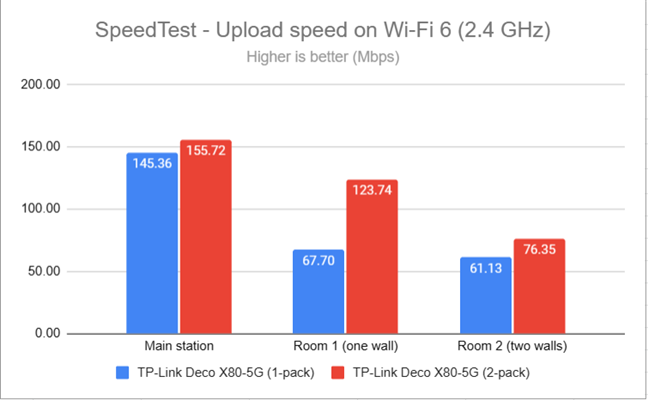 The average upload speed on the 2.4 GHz band

These numbers look excellent. But what about the 5 GHz band?

The benefits of an Ethernet Backhaul on the 5 GHz band

I repeated the same measurements as before, but using the 5 GHz band and the Wi-Fi 6 standard. The wireless signal strength improved significantly in rooms further away from the main station, reaching a maximum improvement of 30% in Room 2, which is separated by two walls from the main TP-Link Deco station. 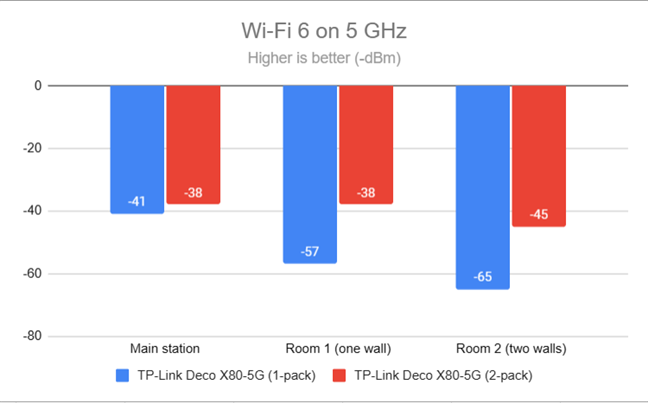 The SpeedTest download speed also increased by up to 28% in Room 2, where I noticed the biggest improvement. 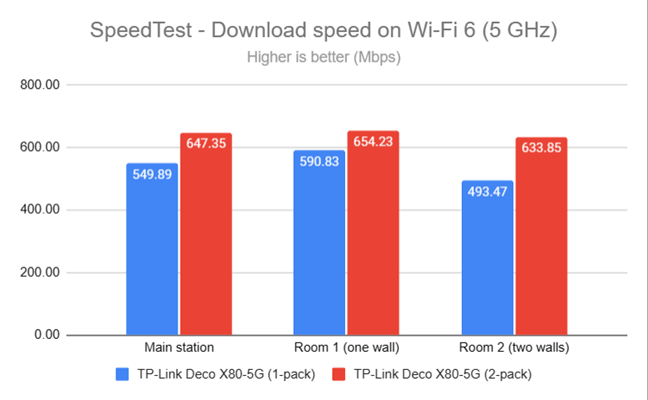 The maximum upload speed of my internet connection is 800 Mbps, limiting the TP-Link Deco X80-5G system. Still, in Room 2, I noticed a 26% increase in upload speed, which is quite significant. 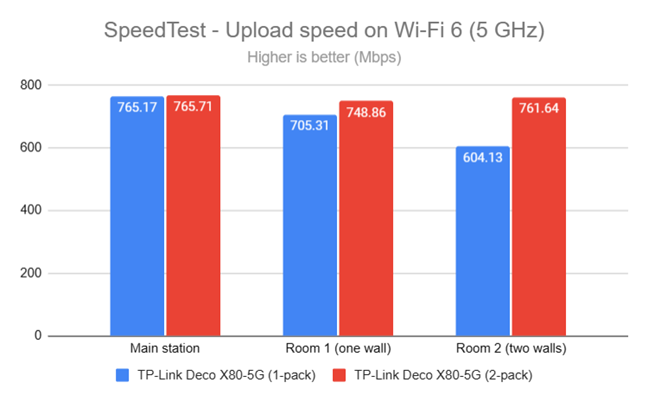 The average upload speed on the 5 GHz band

The improvements in signal and speed were remarkable, even though the apartment used for measurements is rather small. I expect the differences to be even greater if you live in a three or four-room apartment or in a one-story house. You should observe even greater improvements when using two or more TP-Link Deco stations connected together via an Ethernet backhaul.

What do you think about creating an Ethernet Backhaul for your TP-Link Deco system?

I hope you found my experiment and measurements interesting. If you already own a TP-Link Deco mesh system or are planning on purchasing one, and you want the best possible Wi-Fi coverage at the best possible speed, feel free to set up an Ethernet Backhaul. And then, return to this article and let me know what you think and the results you got.

How to factory reset a TP-Link Deco system

How to configure Parental Controls on TP-Link Deco