Galaxy A32 5G is part of Samsung’s latest lineup of affordable smartphones that cater to the needs of people who can’t afford flagship products. The device looks good, has a generous battery, an impressive number of cameras, and 5G connectivity. Plus, the Samsung brand that millions of people love. Are these characteristics enough to make the Samsung Galaxy A32 5G a great product that you should buy? Read our review and find out:

This smartphone is a solid choice for:

There are a lot of good things to say about the Samsung Galaxy A32 5G:

There are some important downsides too:

If you are a Samsung fan and you want 5G connectivity, excellent battery life, good performance, and pleasant design without spending a lot of money, Samsung Galaxy A32 5G is a smartphone that you should consider buying. It performs well for most users, and its camera system does what you expect from a smartphone in its price range. However, the same smartphone without 5G has a better screen, and it costs a bit less, so you may want to take a look at the “standard” Samsung Galaxy A32 too.

Unboxing the Samsung Galaxy A32 5G

Samsung Galaxy A32 5G comes in a beautiful cardboard box with a big picture of the device on the top cover. The box’s back has a sticker on it with more details about the exact model you bought and where it was manufactured. 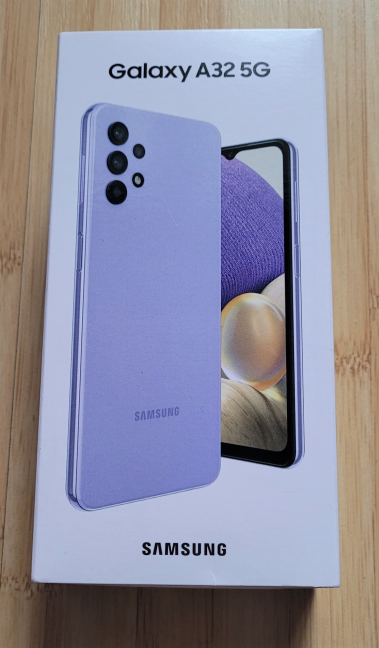 The packaging used for Samsung Galaxy A32 5G

Inside the box, you first see another cardboard box that contains the quick start guide and the warranty. Beneath it, you find the smartphone, and beneath that, the charger, a USB cable, and the ejection pin for the SIM tray.

Unboxing the Samsung Galaxy A32 5G

Here’s how everything looks after finishing the unboxing process. As you can see, Samsung Galaxy A32 5G doesn’t bundle a headset. But, Samsung does bundle a 15W adaptive faster charger, using an old technology that has been around for many years now. 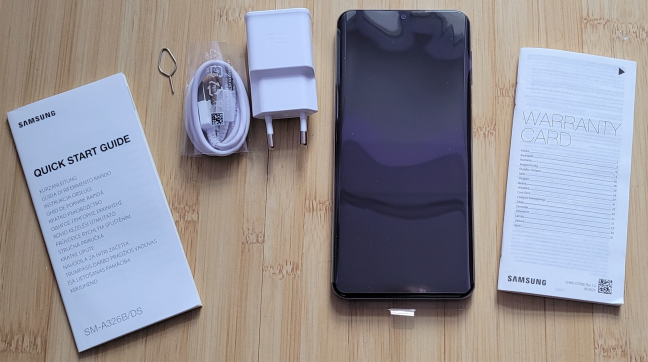 Samsung Galaxy A32 5G: Everything found inside the box

The packaging used for the Samsung Galaxy A32 5G looks good and is easy to unpack everything. However, some users may be disappointed by the lack of a bundled headset.

Samsung Galaxy A32 5G is a large 6.5-inch smartphone with rounded corners and the following dimensions: 6.46 x 3.00 x 0.36 inches or 164.2 x 76.1 x 9.1 mm. It is also relatively heavy, weighing 7.23 oz or 205 grams. This smartphone is available in four color variants: Awesome Black, Awesome White, Awesome Blue, and Awesome Violet. That’s a lot of “Awesome,” and we would have appreciated some more creativity. 🙂 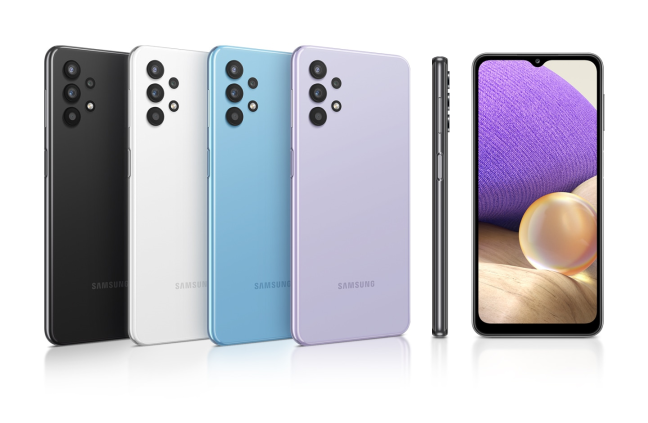 The colors available for Samsung Galaxy A32 5G

We tested the violet color variant, which looks good and is more interesting than the classic black most people opt for. The back of the Samsung Galaxy A32 5G is relatively elegant, even if it’s made entirely of plastic. The frame is also from plastic, even though it feels a lot tougher than the back. Another difference is that the frame has a high-gloss shine, which makes it look similar to the one used on more premium models. The four cameras and the flash on the back are impressive for such an affordable smartphone, and their design is unusual compared to other Samsung Galaxy devices. As you can see in the picture below, three separate camera modules stick out from the flat back panel. 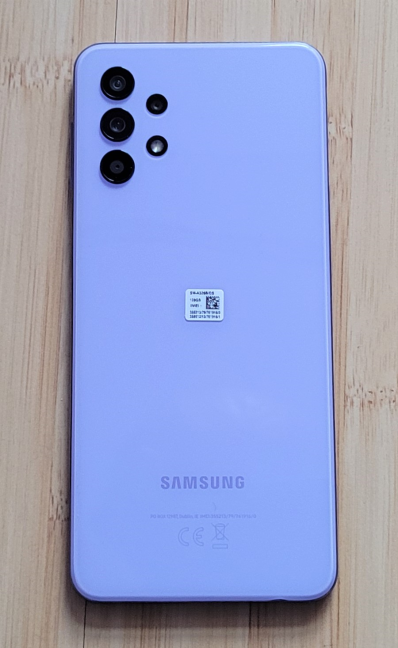 Samsung Galaxy A32 5G: The cameras on the back

Samsung Galaxy A32 comes in 5G and 4G variants, but the two are pretty different. It’s not just the 5G connectivity that’s different, but also the screen, the camera system, the card tray, the fingerprint sensor, and the hardware inside the two smartphones. If you are interested in the non-5G variant, you should look for specific reviews and skip reading this one. Getting back to Samsung Galaxy A32 5G, it has a TFT screen, with a maximum resolution of 720 x 1600 pixels and 270 ppi density. Also, it is protected by Corning Gorilla Glass 5, which helps the smartphone sustain falls and resist scratches. At the top of the screen, you notice a small circular hole that holds the selfie camera right in the middle. 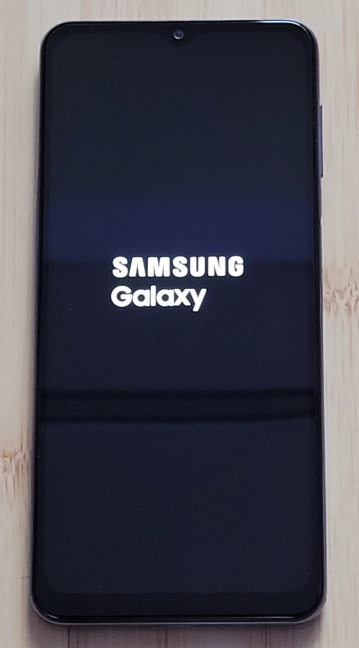 The front side of the Samsung Galaxy A32 5G

On the bottom bezel of the Samsung Galaxy A32 5G, you find the USB-Type C port right in the middle, the headphone jack, the loudspeaker, and a microphone. 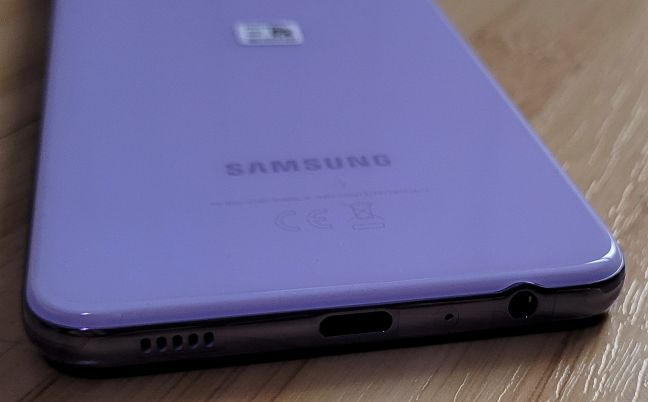 Samsung Galaxy A32 5G: The ports on the bottom bezel

On the left side, you find the card slot that can hold both a microSD card and a nano-SIM. If you don’t use a microSD card, you can turn this phone into a Dual-SIM one.

Samsung Galaxy A32 5G: The buttons on the right side

The top bezel holds just the second microphone. There’s no additional speaker, so there’s no stereo support because you need two speakers for that.

Samsung Galaxy A32 5G has a pleasant design, and it comes in several color variants that look good. The camera system has a unique design approach that you don’t see on other Samsung Galaxy smartphones. This being a relatively affordable model, it is made mainly from plastic materials, and its durability is not going to be comparable to that of more expensive models.

Samsung Galaxy A32 5G features a mid-range eight-core MediaTek MT6853 Dimensity 720 5G System on a Chip (SoC), with two powerful ARM Cortex-A76 cores operating at a speed of up to 2 GHz, and another six lower-performance ARM Cortex-A55 cores also working at 2 GHz.

The SoC found inside the Samsung Galaxy A32 5G

Samsung Galaxy A32 5G: Details about the screen

The camera system seems impressive for a smartphone in its price range. On the back, you find four cameras:

There’s also a LED flash for taking photos in low-light conditions. For selfies, you have a 13MP wide camera in the notch of the display, with an f/2.2 aperture. 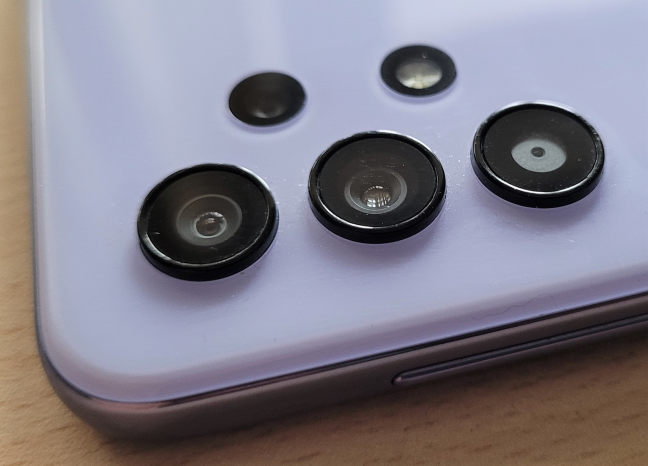 The camera system available on the Samsung Galaxy A32 5G

Samsung Galaxy A32 5G is powered by a non-removable Li-ion battery with a capacity of 5000 mAh. It supports fast charging at 15W, but there’s no support for wireless charging built-in.

Details about the battery on the Samsung Galaxy A32 5G

If you want more details about all the features and hardware specs, visit this page: Samsung Samsung Galaxy A32 5G Specs.

Read the second page of this review for details about the smartphone experience offered by the Samsung Galaxy A32 5G, its cameras, operating system, and bundled apps, as well as its performance in benchmarks.