Many computers use processors with built-in integrated graphics that help them provide basic video features. However, some PCs also have dedicated video cards that are used for more demanding apps and games. Usually, Windows 10 automatically switches between graphics cards, depending on the apps you are using and the games you’re playing. However, sometimes, you might want to force a particular app or game to use the discrete video card or the built-in integrated graphics. So how do you force a game to use a dedicated graphics card? In Windows 10, you can do this directly from the Settings app without having to search through Nvidia’s or AMD’s apps for the right settings. Here's how:

Why would you want to change what graphics card a game uses? Why change the GPU used by specific apps? 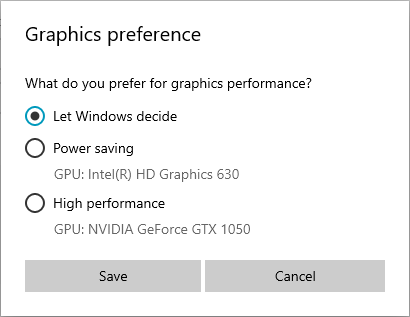 To balance performance versus power usage, computers must be able to use the right graphics option for every app and game you run. If the integrated graphics is powerful enough for Paint 3D, that is what your computer should use. However, if you want to play the latest 3D video game on Steam, it should switch to using the much more powerful Nvidia or AMD video card.

Usually, the switch between the two graphics options is done automatically by your graphics drivers. However, sometimes, you might want to specify by yourself whether an app or game should use the integrated graphics or the discrete video card on your computer.

Now let’s see how to change what graphics card a game uses (or an app):

Start by opening the Settings app. A quick way to do that is to click or tap on its button on the Start Menu. 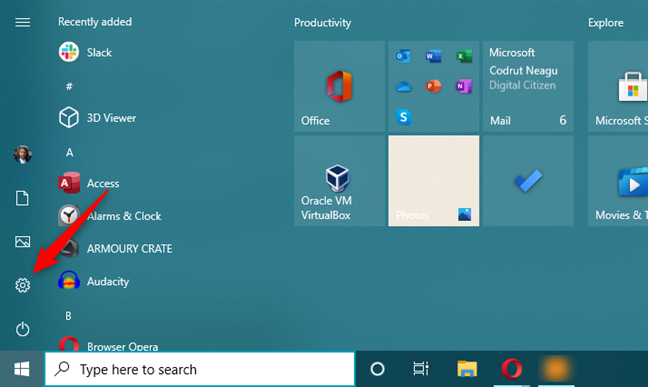 In the Settings app, click or tap on System. 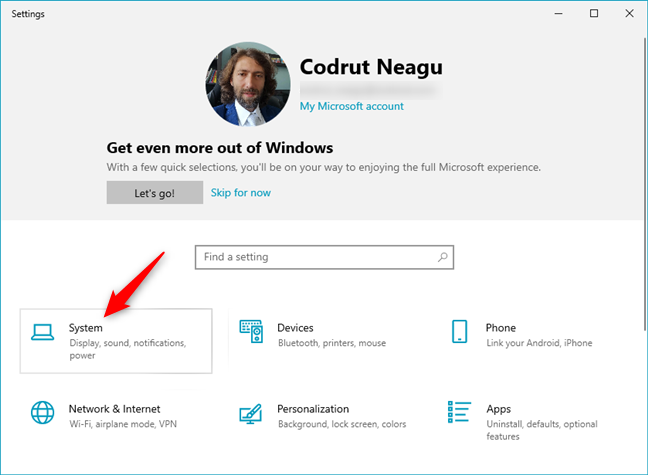 If the Display page is not already shown, make sure you open it by selecting it on the left side of the window. 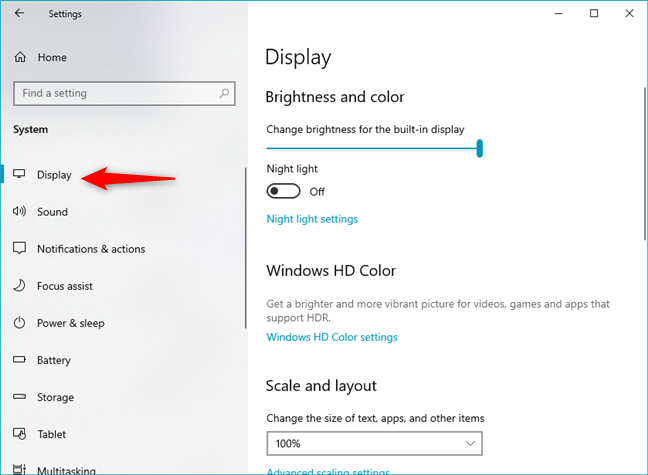 The Display settings from Windows 10 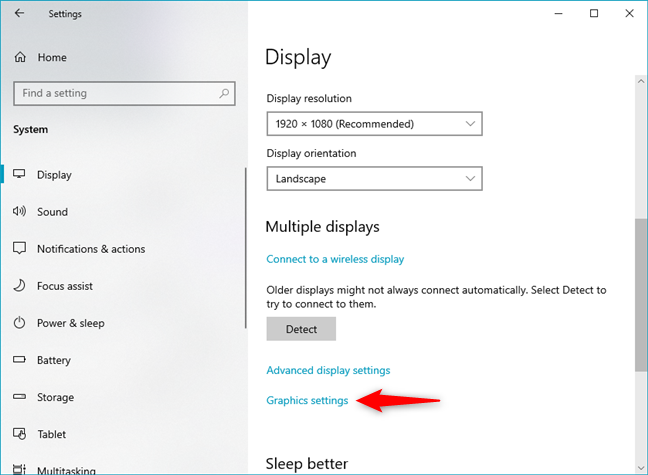 Now the “Graphics settings” page should be displayed. On it, Microsoft explains what you can do in a clear manner: “Choose between better performance or battery life when using an app. You might need to restart the app for your changes to take effect.” 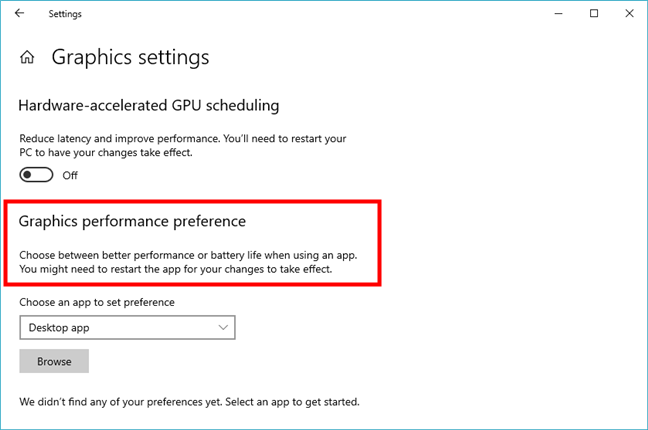 TIP: If you don’t know which video cards you have inside your laptop or PC read: 2 ways to find your exact graphics card model without opening your PC.

Step 2. Select the type of application or game for which you want to change the graphics card that’s being used 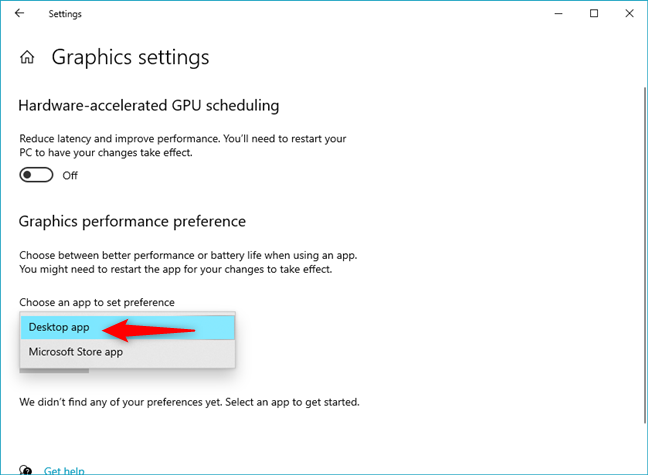 Step 3. Choose the app or game for which you want to change the graphics card

If you chose to configure a “Desktop app,” you should see a Browse button. Click or tap on it to navigate through your Windows 10 computer and select the executable file of the app or game. 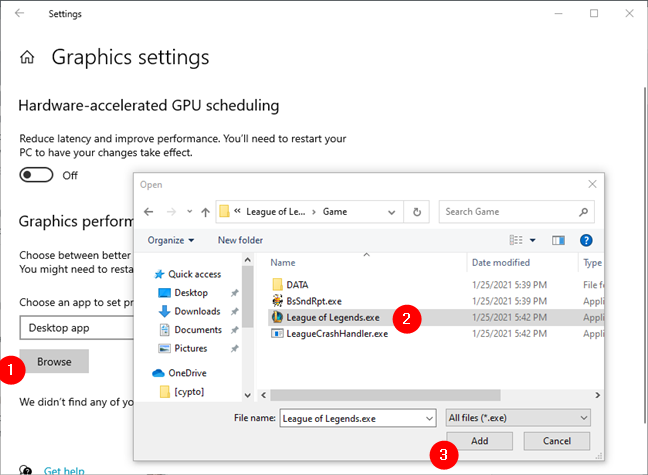 Selecting a game for which to force the graphics card used

After you press the Add button, the application or game is added to the list of apps for which you can set what graphics card is used. 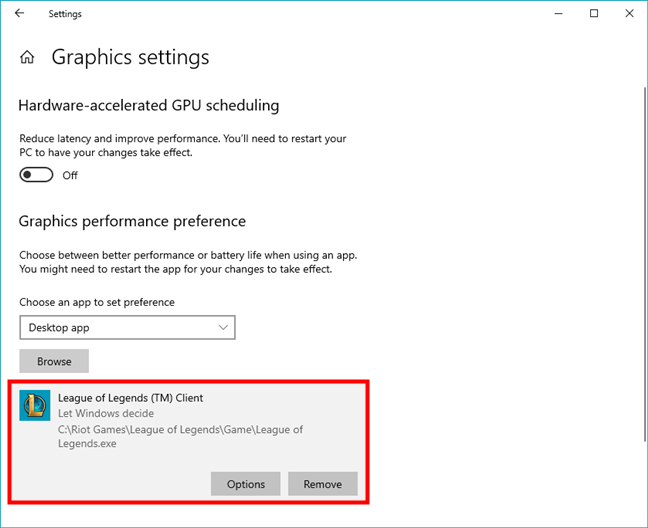 If you chose to configure a “Microsoft Store app,” you get a second selection field called “Select an app.” Click or tap on it. 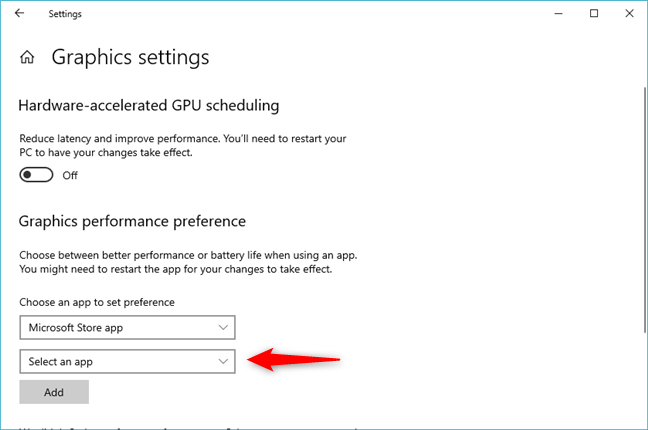 You can now see a list of all the apps and games you have installed from the Microsoft Store. 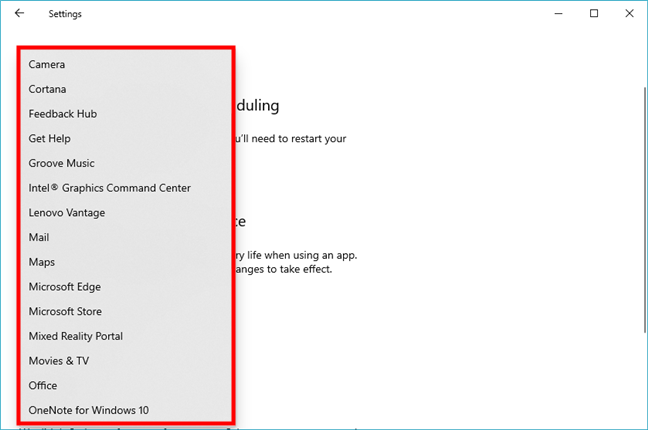 Click or tap on the Microsoft Store app that you want to configure, and then press the Add button beneath it. 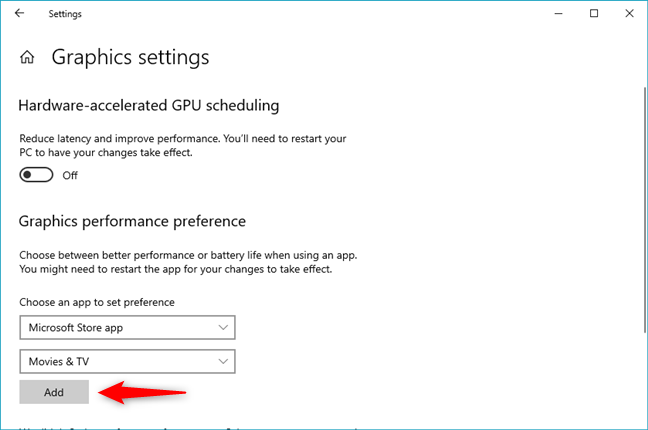 After you press the Add button, the app or game you selected is added to the list of apps for which you can manage graphics preferences. 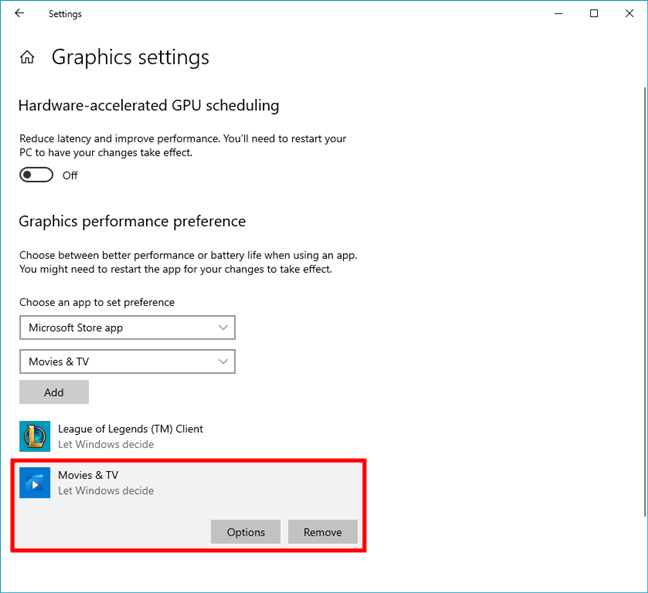 The Microsoft Store app was included in the list

Step 4. How to change what graphics card a game or app uses 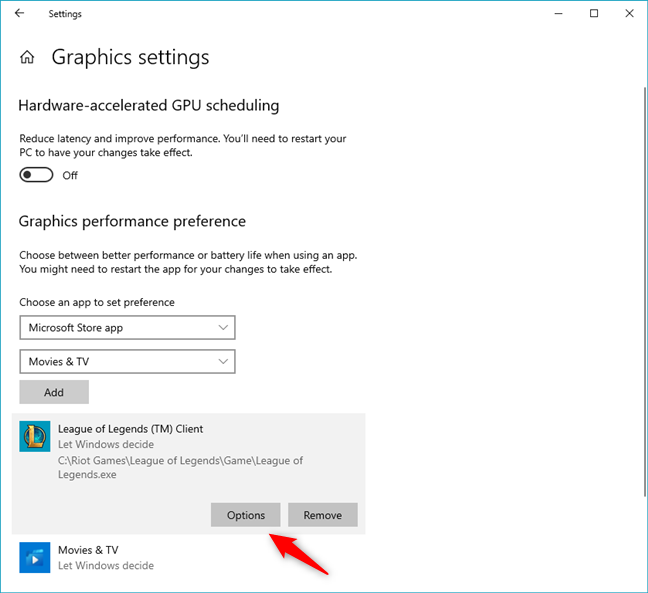 To force the use of a specific graphics card for a game, press Options

A new dialog called “Graphics preference” opens up. You can see the graphics cards that you can use on your computer, and which one saves power or offers better graphical performance. For instance, on our gaming laptop, we can “Let Windows decide,” or we can choose between:

Make the selection you prefer and click or tap Save. 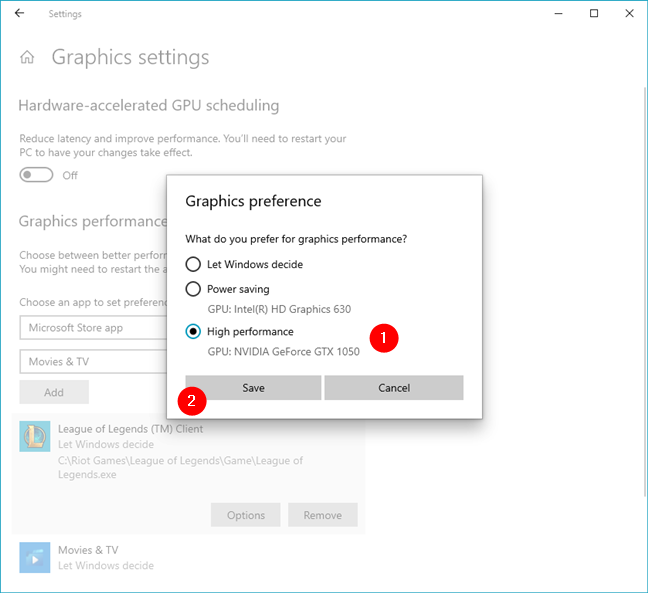 How to change what graphics card a game uses

Repeat the process for every app or game that you want to configure and, the next time you launch them, Windows 10 will use the video card you chose, offering you either higher performance or longer battery time, depending on your preferences.

How to remove an app or game graphics performance profile

If you change your mind and no longer want to manage what video card is used by an app or game using the “Graphics performance” feature, you can. In the list of managed apps and games, click or tap on the one that you want to stop managing and then press the Remove button. 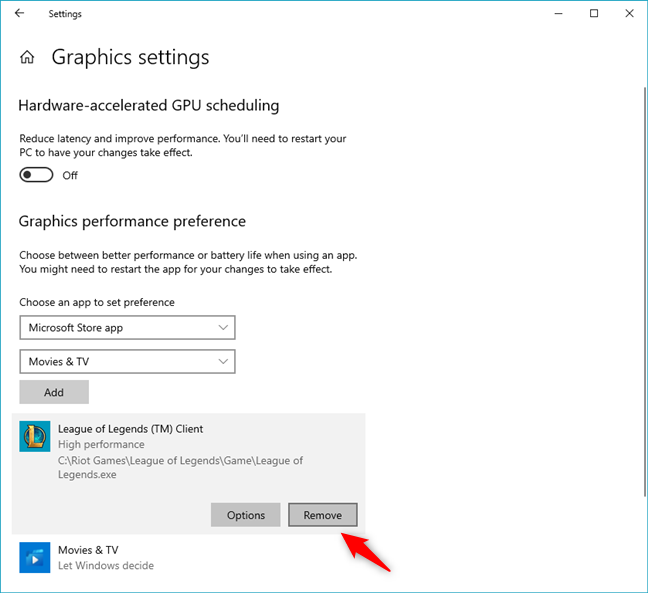 Removing the GPU preference for a game in Windows 10

The graphics performance profile for that app or game is deleted immediately and is no longer used.

Did you force a game to use your dedicated graphics card? Or maybe a Microsoft Store app?

...or do you prefer leaving Windows 10 to automatically choose the best option? Either way, now you know how to get a game (or app) to run on a specific graphics card in Windows 10. We are curious to know whether you like making choices on your own or if it’s too much of a hassle. Also, do you think that this Windows 10 feature is better than making the same settings in Nvidia’s or AMD’s video drivers? Use the comments below to let us know.

When buying a gaming laptop or mini PC, get one with a better video card, not an Intel Core i7 processor

7 ways to tell how many cores your processor has

What model is my Windows 10 PC, laptop, or tablet? 8 ways to find out

SSD vs. HDD: Do SSD drives give you higher frame rates in games?