Finally, a compact Android flagship smartphone from Samsung. Ever since the Galaxy S7, Samsung’s top-of-the-range smartphones have only gotten larger and heavier. Not anymore! While the Samsung Galaxy S22 is by no means tiny, it’s still smaller and thinner than its Android competitors. Does this mean that Samsung made compromises in regards to build quality of the device or its specs? I tested it thoroughly, benchmarked it, and used it daily for two weeks, and the conclusion is, spoiler alert, no, almost no corners have been cut. Samsung has taken the S21 and refined it in every aspect. Read this review to find out more about my experience with the Samsung Galaxy S22:

Samsung Galaxy S22: Who is it good for?

The Samsung Galaxy S22 is a great choice for:

There are very few things that could have been improved, starting with:

We have a winner! And not because of bold moves, not because of fancy, experimental tech, but because Samsung decided to improve on its already great Galaxy S21. The Samsung Galaxy S22 is a natural evolution from its predecessor. Better cameras, better performance, a more compact chassis, the same polished interface and ecosystem integration, and all that at a similar price as last year’s flagship. If it weren’t for that small decrease in battery capacity (and battery life), I would’ve had nothing major to complain about. I highly recommend the Samsung Galaxy S22 for people who want the best all-round Android smartphone and for those who love compact smartphones. 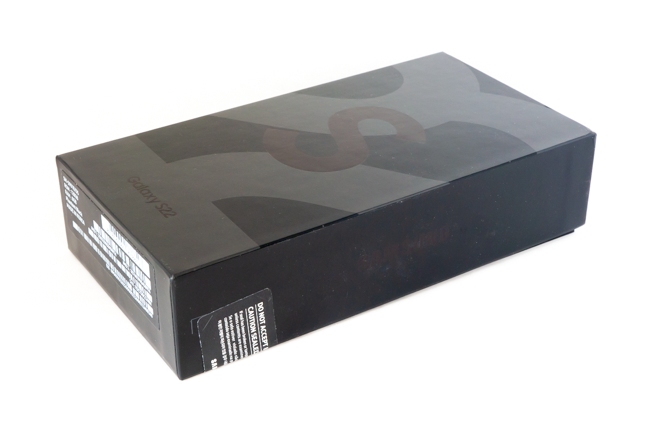 The box the Samsung Galaxy S22 comes in

On the back of the box, you get the same notice you got on the previous generation of Samsung’s flagships, that the box doesn’t include a charger. This, as well as the fact that the package is made out of recycled materials and is printed with soy ink, is consistent with Samsung’s goal to lessen the impact its devices have on the environment. 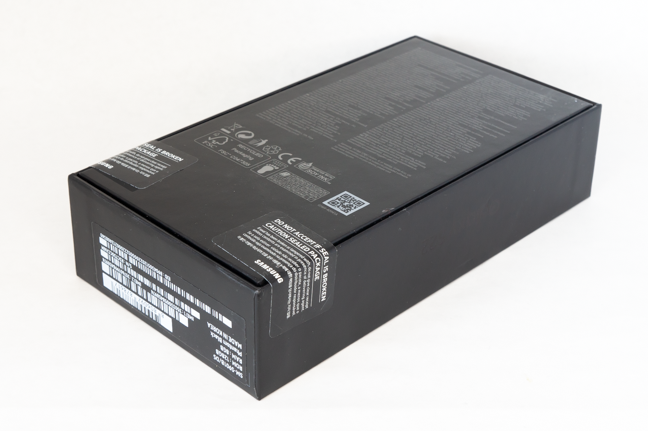 The back of the Samsung Galaxy S22 box

The minimalistic approach is continued inside the box. Here, you only find the usual leaflets, the SIM ejection tool, a 3.3 feet long (1 meter) USB-C to USB-C cable, and, of course, the smartphone. 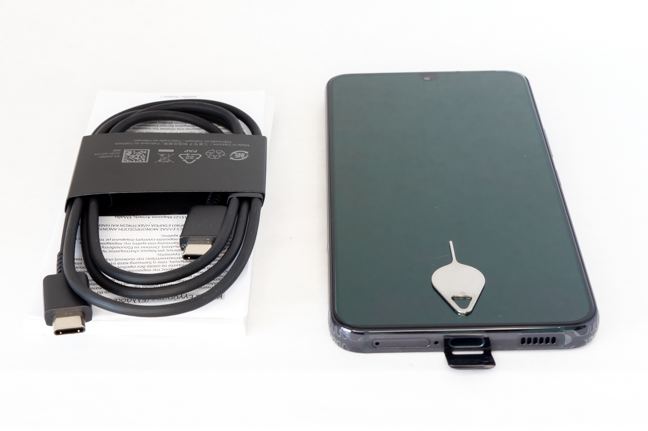 Unboxing the Samsung Galaxy S22 is, as expected, nothing out of the ordinary. Apart from the bare minimum, there are no accessories in the box. The package is sturdy, eco-friendly, and has attractive embossed graphics.

When you compare it to the Galaxy S21, the Samsung Galaxy S22 feels and looks like an iterative update. It’s slightly smaller in all dimensions (5.75 x 2.78 x 0.30 inches or 146 x 70.6 x 7.6 mm versus S21’s 5.97 x 2.80 x 0.31 inches or 151.7 x 71.2 x 7.9 mm), lighter (5.89 oz or 168 grams, three grams lighter than the S21) and its chassis feels sturdier. It’s not just an impression, as due to the shape of the Galaxy S22, the frame is thicker and the overall structural strength of the device has clearly increased. The Galaxy S21 had a rounded back, whereas the Galaxy S22 is almost flat. This is true on the front as well: the S21 had what’s called a 2.5D glass, with rounded edges; the Galaxy S22, on the other hand, has a perfectly flat display, with its edges protected by the same aluminum frame. This bodes well for the drop and scratch resistance, as well as the fact that the display and the back are protected by Corning Gorilla Victus+ glass.

On the front of the Samsung Galaxy S22, you can only see a tiny cutout for the camera. There are other features as well, but they are invisible: a light sensor, a proximity sensor, an ultrasonic fingerprint reader, and the main speaker. If you look closely, you may notice the speaker slit above the camera, but overall, the front is as clean as they get. 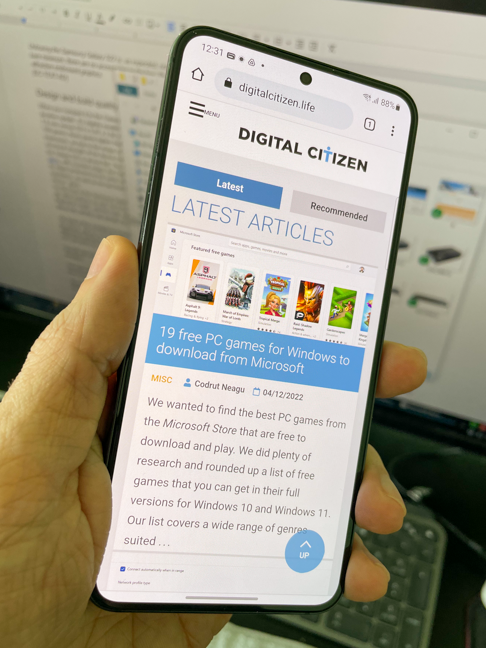 The front of the Samsung Galaxy S22

The back of the smartphone features the triple-camera system, slightly raised from the rest of the phone, and an LED flash. The design is very similar to the one of the Galaxy S21, with the main differences being the back cover material (frosted glass, in this case) and the fact that on the Galaxy S22, the back isn’t curved towards the edges. 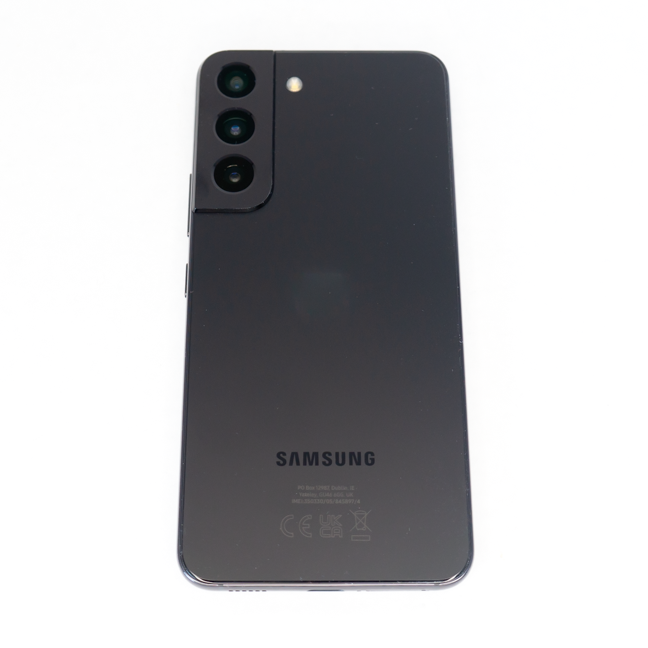 The back of the Samsung Galaxy S22

The left side of the phone has no ports or buttons, only two plastic inserts which facilitate signal reception. 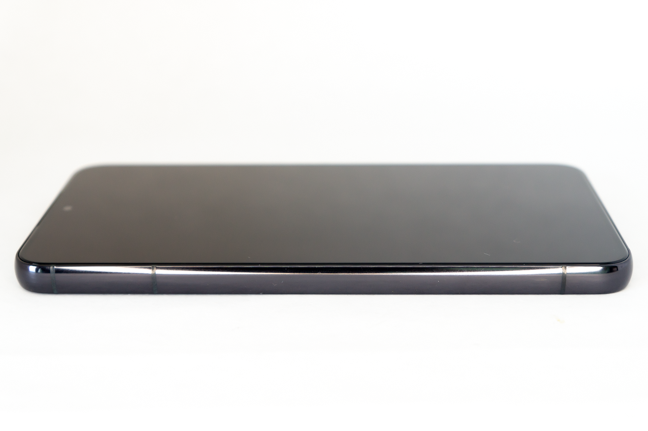 The left side of the Samsung Galaxy S22

The right side contains all the buttons (the volume rocker and the power buttons). Pressing them provides good feedback. 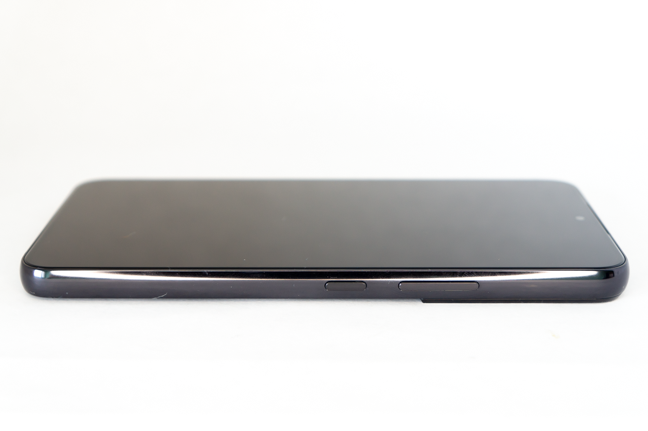 The right side of the Samsung Galaxy S22

The top of the smartphone has a hole for one of the microphones and a plastic insert, again for the GSM antenna. 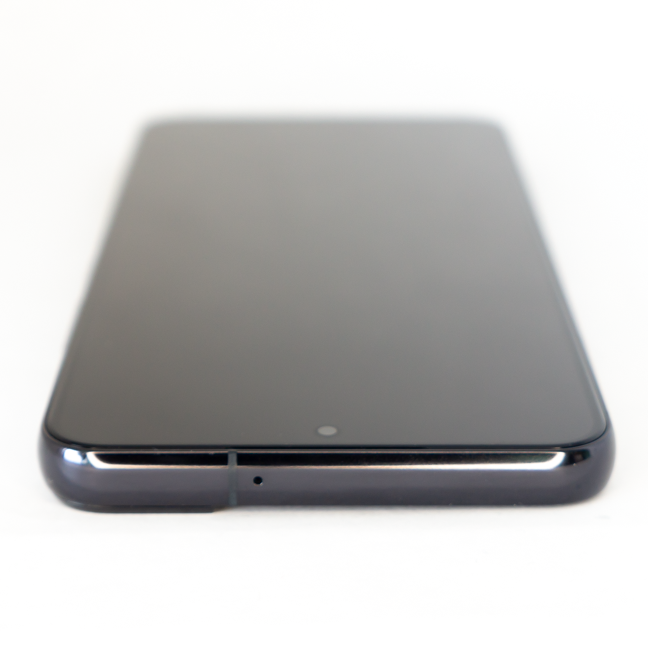 The top of the Samsung Galaxy S22

The bottom of the Samsung Galaxy S22 houses the USB-C charging port, the main microphone, the SIM tray, and the second speaker. 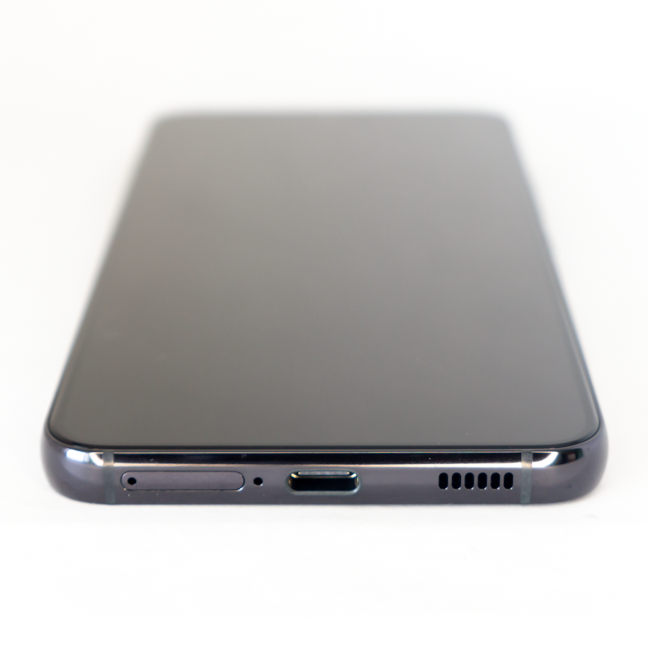 The bottom of the Samsung Galaxy S22

The Samsung Galaxy S22 5G has an IP68 rating for dust and water protection, so it’s highly resistant to dust and can withstand being submerged for 30 minutes in up to 1.5m of water. There are no less than eight colors you can choose from for your Galaxy S22. Phantom Black, Phantom White, Green, and Pink Gold are the “standard” ones:

The colors available for all customers

Then, there are the Graphite, Cream, Sky Blue, and Violet, which are exclusive to the Samsung online store.

These colors are available exclusively on the Samsung online store

Overall, the design and build quality of the Samsung Galaxy S22 are excellent. The smartphone feels very sturdy and is just the right size for people with average hands. The design follows the same general theme as its predecessor, but it gives up the rounded edges in favor of a more blocky, iPhone-like design.

With the Galaxy S22, Samsung went for an incremental upgrade to the Galaxy S21. In Europe, the S22 is powered by Samsung’s own Exynos 2200 chipset (a step up from the Exynos 2100 used on the S21). The rest of the world gets the Snapdragon 8 Gen 1 version, arguably the most powerful chipset on the Android market at the moment. The amount of memory hasn’t changed, it’s still 8 GB, with 128 GB or 256 GB of storage. I won’t even mention expandable storage, as Samsung doesn’t offer this “highly advanced” feature (which is present on its low-end smartphones). The operating system occupies roughly 22 GB. 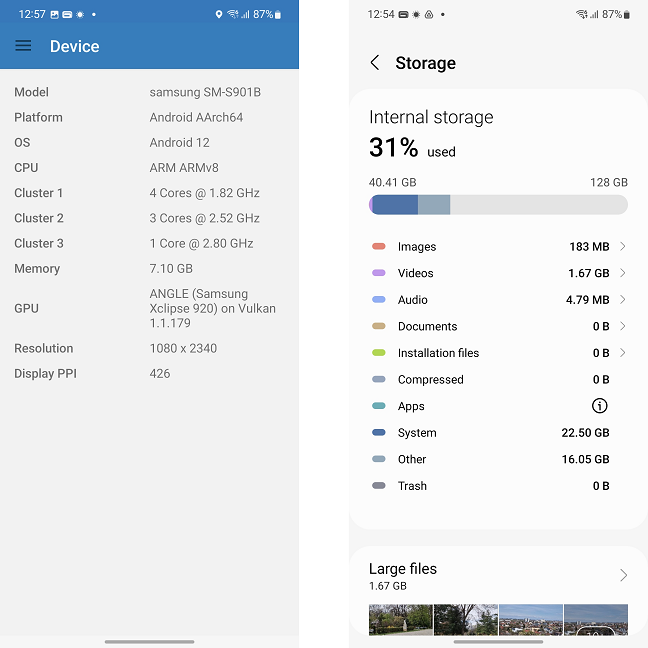 The device I used for this review is the Exynos variant with 128 GB of storage. Its performance in synthetic benchmarks is generally lower than that of the Snapdragon variant, but I’ll discuss this more in the corresponding section on the next page of this review.

The screen of the Samsung Galaxy S22 has a diagonal of 6.1 inches and a resolution of 1080 x 2340. The pixel density is thus excellent, at over 425 PPI. The Dynamic AMOLED 2X display is slightly smaller than the one on the Galaxy S21 but retains the same specs: 1300 nits maximum brightness, 120 Hz refresh rate, capable of displaying HDR10+ images.

The cameras are the most significant upgrade from the last generation. Here are the specs for each camera: 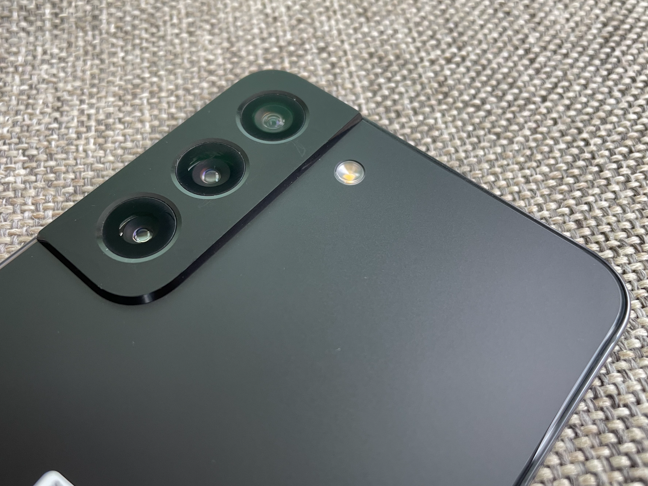 The main cameras of the Samsung Galaxy S22 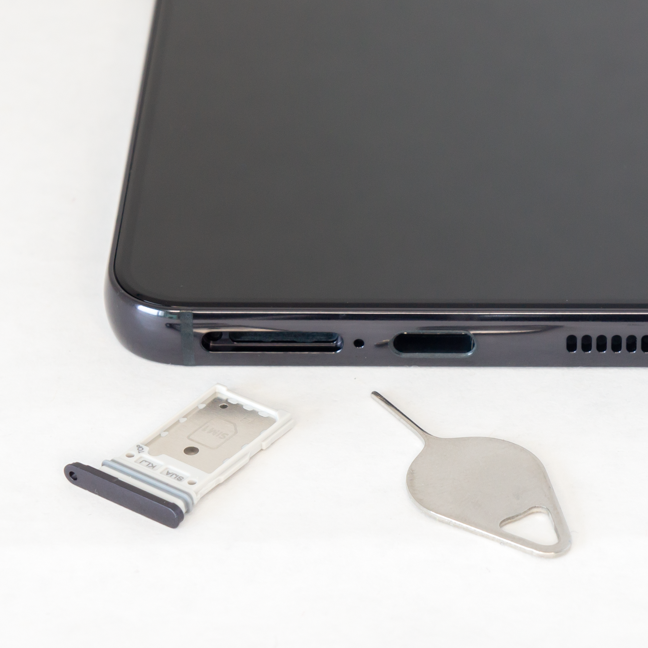 Samsung could have easily fitted a MicroSD card reader inside the S22, but they didn't

The battery is, sadly, smaller than the one on the Galaxy S21. It has 3700 mAh (down from 4000 mAh), and it can be charged at 25W. The Samsung S22 Ultra, in contrast, has a 5000 mAh battery capable of fast charging at 45W. The smartphone can be charged wirelessly and can also provide wireless power to other devices.

For a complete list of technical specifications, as well as the price, you can visit the product webpage: Samsung Galaxy S22.

Now that I showered you with all sorts of geeky specs, it’s time I get to the actual testing. On the next page, you can find the benchmark tests, as well as the real-life experience. Want to know what it’s like to live with the Samsung Galaxy S22? Read on.