Motorola unveiled three new and exciting Android smartphones at a special event that took place on September 8th, in Milan, Italy. After the (fairly) recent launch of the new Edge 30, announced on August 18, rumors were that other new Edge phones were on their way, and now we know that to be true. The smartphones Motorola revealed this evening are the Edge 30 Ultra, Edge 30 Fusion, and Edge 30 Neo. Here’s what they look like and what to expect from them:

The new Motorola Edge 30 Ultra is the company’s top high-end offer, aimed to compete with the best smartphones on the market. The Edge 30 Ultra comes with a high-resolution camera, extremely fast charging, a premium finish and design, and many awesome features. 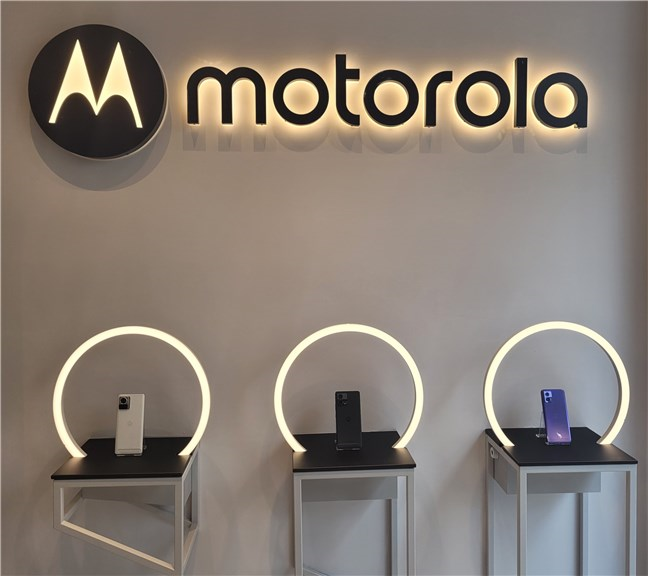 For starters, the main camera system on the back of the Edge 30 Ultra features a whopping 200-megapixel primary sensor with OIS, the largest sensor ever used by the company (1/1.22”). In addition, we get a 50 megapixels camera for ultrawide and macro shots and a 12-megapixel telephoto portrait camera able to zoom up to 2x. On the front, the smartphone is equipped with another high-performance 60-megapixel selfie camera. All in all, the four cameras on the Edge 30 Ultra should be able to let you snap excellent shots and selfies in all situations and regardless of the lighting conditions. 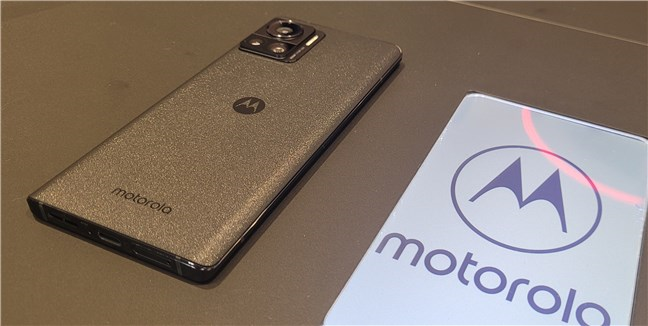 As we’re talking about a high-end device, Motorola didn’t cut corners when it comes to the processing power either. Running on the latest 5G Snapdragon 8+ Gen1 mobile chipset and featuring 12GB of RAM plus 256GB of flash memory, this smartphone is definitely “ultra” in all key aspects. It also comes with a mind-boggling charging prowess: 125 Watts fast charging and 50 Watts fast wireless charging! That means that its 4610 mAh battery can get enough juice to last you for a day (12 hours) in only 7 minutes!

The Motorola Edge 30 Ultra features what the company calls an “Endless Edge Display.” In translation, the screen bezels are extremely thin, and the edges are curved, falling seamlessly into the metallic frame on the sides. The display is a large 6.67” pOLED FHD+ that can show over 1 Billion colors (by the way, pOLED displays are a type of more flexible OLED panels made by LG), with a refresh rate of 144 Hz, a pixel density of 394 PPI, DCI-P3, and a peak brightness of 1250 nits.

There’s no question about it: in terms of design, the Motorola Edge 30 Ultra looks and feels great, and it’s made of premium materials only. Available in Interstellar Black or Starlight White, the phone is what I call elegant and classy. 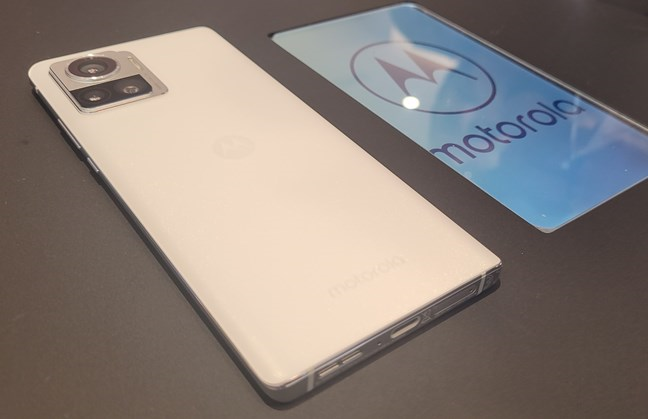 The second smartphone Motorola unveiled today is the Edge 30 Fusion. In their words, this phone is at “the intersection of performance and beauty.” And I kind of agree: it looks similarly beautiful to the Edge 30 Ultra, and while it comes at an accessible price, it still packs premium features and solid hardware. 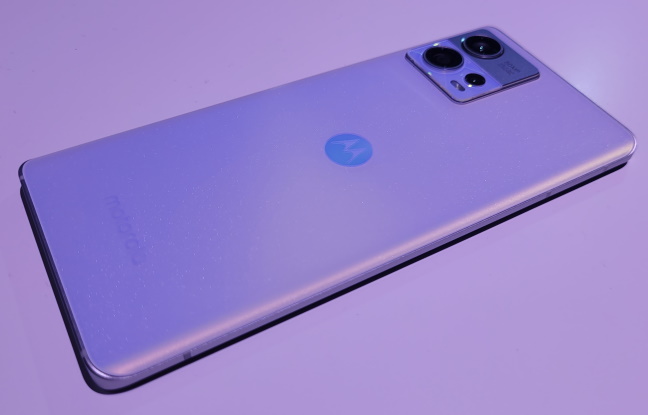 Based on the Snapdragon 888+ mobile platform, the Edge 30 Fusion benefits from 8 GB of RAM and can be equipped with either 128 or 256 GB of flash storage space. The cameras are also quite capable: the main one uses a 50 MP sensor, has OIS (Optical Image Stabilization) and Omni PDAF. The latter is a technology that allows the camera to use 100% of the pixels for focusing, both horizontally and vertically, meaning faster and more accurate performance in any light. On top of that, we also get a 13 MP ultrawide + macro lens on the back of the phone and a capable 32 MP selfie camera on the front.

The display is a 6.55” pOLED capable of showing over 1 Billion colors, just like the Edge 30 Ultra. Its resolution is FHD+ (pixel density of 402 PPI), it supports HDR, the refresh rate is a high 144Hz, and the maximum brightness reaches 1100 nits. A nice touch from Motorola is that, while placing the phone face down, only the edges of the screen light up when you get a notification.

Another key aspect of the Motorola Edge 30 Fusion is its fast charging performance: compatible with the company’s 68 Watts TurboPower fast charge standard, the 4400 mAh battery will have enough power for the day (12 hours) in about 10 minutes.

Last but not least, the colors available for the Edge 30 Fusion are quite nice too, matching any preference: Cosmic Grey, Neptune Blue (Vegan Leather), Aurora White, and Solar Gold.

Last but not least, the third Android smartphone revealed by the company on September 8th is the Motorola Edge 30 Neo. This phone marks the beginning of a partnership between Motorola and Pantone, the leading experts in color. The two companies will be working together in terms of design colors and trend expertise, as well as PR (public relations) for upcoming devices. And the first child of this partnership is the Motorola Edge 30 Neo.

Thought out as a compact and stylish device, the Edge 30 Neo is available in four Pantone colors, including the Pantone Color of the Year 2022: Very Peri. The other three are Ice Palace (cool white for those who love light), Aqua Foam (a kind of nature-inspired color), and Black Onyx (classic and stylish). 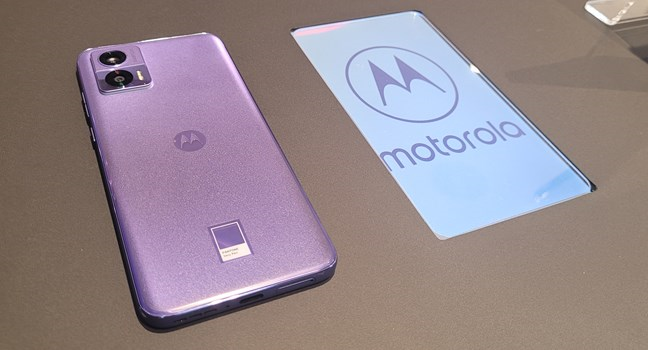 Other key aspects of the Motorola Edge 30 Neo include a thinner design and a lighter body compared to the other Edge 30 smartphones, while still offering capable hardware based on the 5G Snapdragon 695 mobile platform. The screen is slightly smaller, though, as this is intended to be a more compact option: Full HD+ 6.28” pOLED display (over 1 Billion colors) with a 120 Hz refresh rate. The main camera has a 64-megapixel sensor and supports OIS, there’s an additional 13 MP wide plus macro plus depth camera too, and, on the front, you get a 32 MP selfie lens.

Though more compact and thinner, the battery inside the Edge 30 Neo is still quite large - 4020 mAh - and supports fast charging at 68 Watts. That’s gives you enough battery capacity for a day (12 hours) in about 10 minutes. However, to keep the smartphone as light as possible, Motorola decided not to include support for fast wireless charging on the Edge 30 Neo. Still, there's 5 Watts “standard” wireless charging.

What’s your take on the new Motorola Edge 30 smartphones?

I like the new additions to Motorola’s lineup, and, to be frank, I’m quite bought on the whole Motorola - Pantone partnership. The new color palette is beautiful, the three smartphones launched by Motorola today are interesting, and I can’t wait to review them. What do you think? Which one’s your favorite? Let me know in the comments.